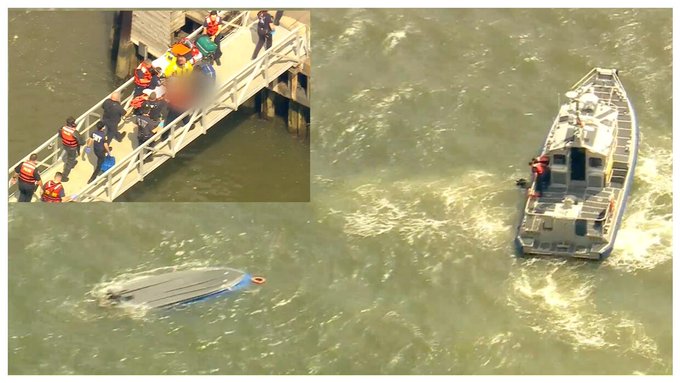 A 7-year-old boy and a 50-year-old woman were killed, police said. They were believed to have died before first responders arrived.

Ten others who were on the boat had been pulled from the water before police and fire first responders, including divers, arrived shortly after 2:45 p.m., officials said.

One of those boaters had serious but non-life-threatening injuries, and the others had minor injuries and were being checked out at the scene, fire officials said.

Police later said that the person they believed was at the helm of the boat was in critical condition.

The boat appeared to be on a recreational outing, and had someone on a jet ski trailing it, police said.

Ten of the boaters appeared to have been pulled from the water by the crews of NY Waterway ferries.

“We are so proud of the NY Waterway captains and crews that leapt into action today to rescue boaters following the maritime accident in the Hudson,” NY Waterways tweeted. “Their training and professionalism saved lives, as they have countless times before.”

Police said the waterway is popular with recreational boaters, despite the traffic, especially in summer.