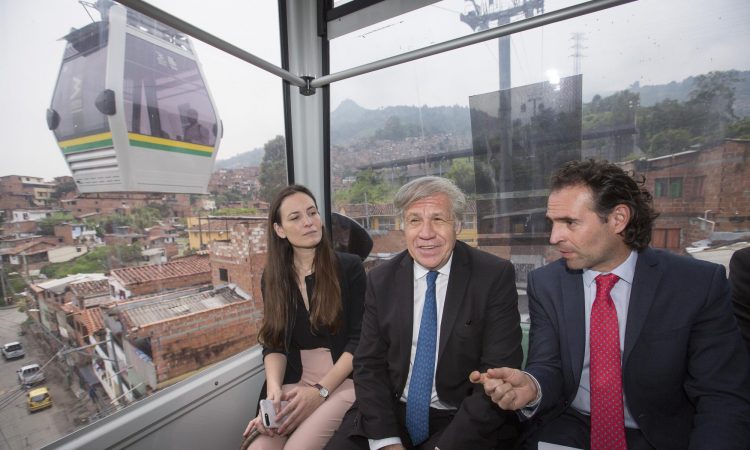 For the third time, in 48 years, a Colombian city will concentrate the political agenda of the continent. Medellín, which had already hosted the event in 2008, lists details to host the 49th edition of the General Assembly of the Organization of American States (OAS), which will be held from June 26 to 28, under the theme of innovating to strengthen hemispheric multilateralism. The OAS Secretary General, Luis Almagro, visited yesterday the Antioquia capital to know the progress of the organization of the contest that will gather the main table of the organization, composed by the delegations of all the Member States, usually headed by the ministers of Relations Foreign “We highlight the place that Medellín occupies in the world, recognized as an example of solving social dynamics. We feel that the Assembly is in good hands, “he noted. Mayor Federico Gutiérrez said the city is ready from the logistics, mobility and security components to receive the event. To guarantee the security of the visiting delegations, the municipality will have support from the National Government.

What is its importance? The assembly is in charge of defining the policies and mandates of the OAS, as well as the structure and functions of its organs. It also carries out the election of members of decentralized and autonomous organizations such as the Inter-American Commission on Human Rights (CIDH), the Inter-American Court of Human Rights (Court-IDH), the Inter-American Juridical Committee and the Justice Center of the Americas, among others. “The organization will bring the continent’s political agenda to Medellin and address the main issues on the hemispheric agenda, but it can also take the city’s dynamism and ability to leave behind the darkest moments, enhancing resources,” said Almagro . The holding of the General Assembly in Medellín was approved on November 28, by means of a resolution of the Permanent Council of the OAS. The topics of the agenda The concept that will include the 49th edition of the assembly will be the discussion of how to modernize the continent’s multilateral system to achieve more effective responses to institutional crises.

Almagro said that the main topic of debate will be the social, economic and governmental crisis in Venezuela. “It is a failed state, permeated by drug trafficking. The fact that (the event) is done in Colombia has never been more justified. The country has a relevant role in the hemispheric community, not only for the peace process, but also for taking charge of the Venezuelan humanitarian and migratory crisis, “he said.

The second important issue will be the release of 90 political prisoners in Nicaragua, a commitment signed three months ago by the government of Daniel Ortega to free them, in addition to respecting the international norms and standards of humanitarian treatment of detainees. Another section will focus on the reaffirmation of the rights of vulnerable populations, conditions of democracy in member countries and the fight against corruption. Two previous events will be the opening of the day: one, between June 5 and 7 called the OAS Model, in which public and private students meet to understand the functions of the organization and the scope of the democratic charter; and another called TIC Americas, on June 25, support platform and business accelerator for young entrepreneurs.