HomeNews“You’ll see” if US will send 5000 troops to Colombia: Trump
News 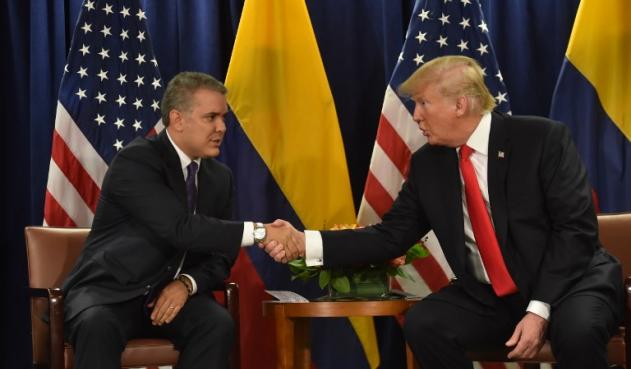 US President Donald Trump evaded answering questions about the possibility of sending military forces to Colombia while meeting with the country’s president, Ivan Duque, on Wednesday.

The two heads of state met during Duque’s first visit to the White House.

While meeting with the press, foreign reporters mainly asked about the Washington’s will to use military force to oust Venezuelan President Maduro, whose country is suffering a major humanitarian crisis.

As other White House officials did before him, Trump refused to ruled out a military “solution.”

“I think there are a number of solutions, a number of different options and we look at all options,” the US president told the press.

When asked if he would send troops to Colombia, Trump initially said that “I never talk about that” and later said that “you’ll see.”

“President Guaido, who is the person about to lead this transition in Venezuela, has strong support and we need to give him even stronger support,” said Duque.

The Colombian president said that the European Union’s decision to recognize Guaido as Venezuela’s president “is very important.”

Duque said that his government will host a summit of the Lima Group, a group of countries from the Americas that support Guaido, but reject military intervention.

“All the countries in the hemisphere will give him all the support he needs to lead the transition in Venezuela,” said the Colombian president.

The humanitarian crisis and Maduro’s increasingly authoritarian rule has diminished his support internationally. But while the US, the EU and most countries in the western hemisphere support Guaido, Maduro can still count on the support of Russia and China.

The United Nations, Mexico and Uruguay have refused to recognize Guaido as president and have urged talks between the polarized political camps in Colombia’s neighbor to the east to seek a solution for the country’s crisis.

share on Facebookshare on Twitter
Who is Juan Guaido? Venezuela opposition leader backed by Trump in bid to depose President Maduro
1 in 10 of Colombia’s municipalities without potable water amid extreme drought