HomeLiveWorks of the center privilege space for pedestrians
Live

Works of the center privilege space for pedestrians 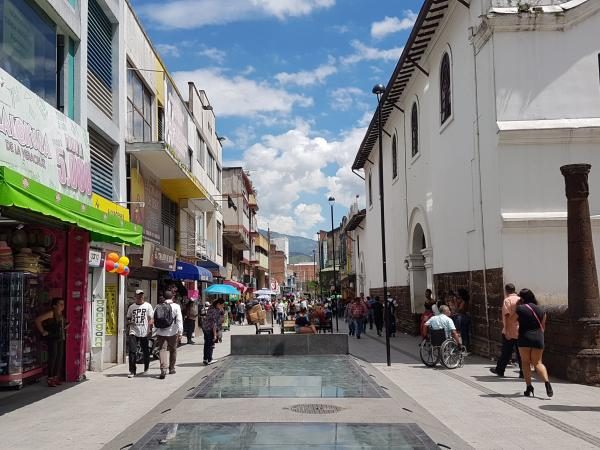 The center of Medellín continues to change its face: of the 55 works proposed by the intervention plan, 18 have been delivered and the other 37 are in execution. The municipal administration delivered a report, before the city council, of the last interventions concluded: section II of La Playa avenue, Plazuela Nutibara and Paseo Boyacá. The investment only for these three sectors amounted to more than 17,000 million pesos A tour of these places showed benevolence and some of the problems after the works were completed.

The Beach section II In this sector, 10,835 square meters of public space were renovated. The main goodness of the intervention, said Paula Andrea Palacio, Secretary of Physical Infrastructure of Medellin, is the space that was given to pedestrians. In addition, 300 meters of bike paths were created there and 32 new trees were planted. Near the Coltejer was recovered an old mailbox that worked in the 60s and that now is part of the historical heritage of the city.

For Secretary Palacio this is proof that, beyond intervening in the physical space, the administration is looking to preserve the center’s referents: “One of the purposes of these works is to recover the architectural and cultural heritage of the city. That’s what we propose, “the official noted. Although now pedestrians have more space and the new trees offer more shade, some venteros consider that the social problems of the sector are maintained. Nidia Elena Jaramillo sells newspapers for more than 10 years in the area. Although the intervention has more space to offer the newspapers, he complained about the social problems. “The mayor has to organize the center. It is that look, here there are robberies every day. In addition, the ‘gamines’ sleep in the pews, urinate on them, in the trees, “denounced the woman.

The same thinks Javier Muñoz, shoeshine boy with more than 20 years of presence in the sector. “One problem is that they gave us very little space to store our things, they do not fit. The other thing is that the ‘chirrincheros’ come to take here and lie down in the new benches, “lamented Muñoz. Plazuela Nutibara New and vigorous gardens, a recovered fountain and the columns of the metro viaduct adorned with lush vegetation are part of the improvements made in the Nutibara Plazuela.

This is a good exercise to offer more and better spaces for the pedestrian, who is the raison d’être of the public space In this sector, after an intervention of 3,780 million pesos, 5,817 square meters of public space were modified and a 60-meter cycle path was made that connects with La Playa and Paseo Bolívar. However, those who frequent the area complain, as in La Playa, of some citizen behaviors that obscure the new spaces. “This was very nice, but we have a problem: the gardens use them as latrines. This makes the plaza smell bad. Here tourists arrive and say ‘what a beautiful park but it smells horrible’ “, commented Freddy Cerón, photographer who has been working in the sector for twelve years.

The last work that highlighted the administration in the council was the Paseo Boyacá, where 3,676 square meters were renovated. It was in this sector where a part of the aqueduct of the 19th century city was found. With the premise of preserving the heritage and citizens know the history of Medellin, there was a kind of museum there: a glass was installed so that people who pass by take a look at the aqueduct of the nineteenth century. One of the purposes of these works is to recover the architectural and cultural heritage of the city.

That’s what we propose For Daniel Carvalho, councilor of Medellín, the works in the center have a commendable goal in common: to give more space to pedestrians. “This is a good exercise to offer more and better spaces for the pedestrian, who is the raison d’etre of the public space,” said the lobbyist. For Carvalho, as the center is the busiest place in the city, with more than 1,200,000 daily visitors, the spaces must be safer and more attractive for those who walk: “These works go in this direction and this should be highlighted. I suggested doing before and after studies to measure auditory and air pollution to demonstrate the positive impact of these interventions. “