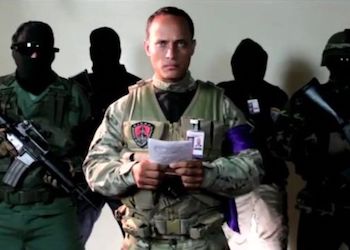 A prominent opposition figure Venezuela was killed after a high-powered firefight with security forces, making him perhaps the highest-profile individual slain in government security operations that critics say are used to target political dissidents rather than crime.

On January 15, security forces in Venezuela killed Óscar Pérez, a former intelligence police officer and action movie star who became a well-known opposition figure after leading a June 2017 attack in which he and other officers dropped grenades and opened fire on the Supreme Court from a stolen helicopter.

A government press release described Pérez as the leader of a “terrorist group.” According to Interior Minister Nestor Reverol, the operation resulted in the capture of six of the group’s members, as well as the deaths of seven others, including Pérez. Videos of the confrontation depict security forces using rocket-propelled grenades and automatic weapons to attack the suspects.

In a video posted on social media during the operation, Pérez appeared bloodied as he explained that authorities were trying to kill him despite his offer to surrender himself.

The non-governmental Venezuelan Social Conflict Observatory (Observatorio Venezolano de Conflictividad Social – OVCS) said on Twitter that there was a “possible extrajudicial killing” during the operation, but that information had not been confirmed.

The bloody confrontation with members of an opposition group is a stark sign that the administration of Venezuelan President Nicolás Maduro has prioritized the use of security forces for eliminating political enemies rather than for addressing rampant crime.

Indeed, an October 2017 investigation showed that the joint police-military operation known as “Operation Liberation and Protection of the People” (Operación de Liberación y Protección del Pueblo – OLP) had created a “state of terror” in the country, leading to at least 560 deaths. Critics have said that the operations are a way to transfer territorial control to armed, pro-government groups known as “colectivos,” which have been linked to political violence and crime.

The Maduro administration continued with this pattern of using security forces to suppress his critics during the opposition-led protests carried out across Venezuela between March and August of 2017. The United Nations found that security forces were responsible for at least 46of the more than 150 deaths that occurred during the protests. However, media reports cite that number as being much higher. According to the Venezuelan Violence Observatory(Observatorio Venezolano de Violencia – OVV), security forces were responsible for more than 20 percent of all murders recorded in Venezuela in 2017.