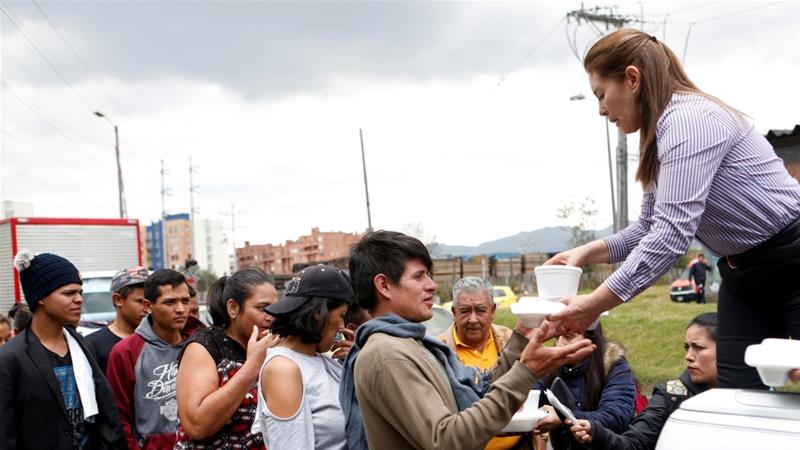 Latin American countries should “share the burden” posed by recent Venezuelan immigration, secretary of the Organization of American States (OAS) has said, referring to an exodus of Venezuelans fleeing deteriorating conditions back home.

At a special meeting of the OAS on Wednesday, member nations described the exodus of Venezuelans to neighbouring countries as a migrant crisis “without precedent” in the Western Hemisphere.

Luis Almagro said that different countries should grant legal status to Venezuelan migrants while working to integrate them socially and economically.

He also announced the creation of a working group that will visit the borders and areas where displaced Venezuelans are settling.

“The exodus is causing significant pressure for several countries that, despite their good intentions, have limitations when attending those who come in,” said Almagro.

“They can’t do it alone, no country can do it alone. It must be a collective action with a shared responsibility approach,” he added.

However, Venezuela and Nicaragua announced that they would not accept any decisions taken in the meeting.

Delegates from Mexico, Brazil, Colombia, Peru and the United States also called on Venezuelan President Nicolas Maduro to accept food and medical supplies for his country’s most vulnerable people and allow international aid groups to work in the country.

But Maduro has rejected offers made by groups to deliver aid, arguing that it as part of a plan to destabilise his socialist government.

“The situation in Venezuela is not a natural disaster, but entirely man-made,” said Alexis Ludwig, the deputy US representative to the OAS.

“President Maduro should unconditionally allow international food and medical assistance to reach the neediest in Venezuela.”

A Venezuelan diplomat at the meeting ignored these requests, saying that the discussion on the country’s migrant crisis is part of a US-led plot to justify an invasion.

On Tuesday, 11 Latin American countries also agreed to allow Venezuelans leaving the country to enter their countries even if their passports have expired.

Meanwhile, under the “Return to the Homeland plan”, Venezuela’s government agreed with the UN on Wednesday to work together and provide technical support for people who want to return.

According to local reports, around 300 Venezuelans gathered outside their country’s embassy in Peru on Tuesday and requested to go back.

I’m in DC today covering the @OAS_official special meeting on Venezuela migratory crisis. We’ll have coverage on @AJEnglish of developments.

The Venezuelans, some of whom said they had been sleeping on the streets and had been taken advantage of by Peruvian employers, arrived hours after Maduro announced a plan to welcome back those who had left the country on national TV.

“I sometimes feel pain for the Venezuelans who left,” said Maduro on Monday, adding that fewer than 600,000 Venezuelans left the country over the past two years and that 90 percent regret the decision.

“We will embrace you again, come to Venezuela, come back to the homeland. We Venezuelans are here, with our big, big Bolivian hearts.”

According to the UN, more than 1.6 million Venezuelans have left their homeland since 2015 to escape severe shortages of food and medicine and inflation that the IMF estimates will reach one million percent this year.

The UN’s migration agency has compared the exodus of citizens to the situation of refugees in the Mediterranean.

“This is very sad,” Joander Perez, a 15-year-old Venezuelan who travelled more than 4,000km with members of his family, told Al Jazeera at the border.

“We were at the best time of our lives, with friends, school, family but we have to leave to find a better life. In Venezuela, we were hungry.”