Uribe is the only Latin American president to receive highest U.S. civilian honor 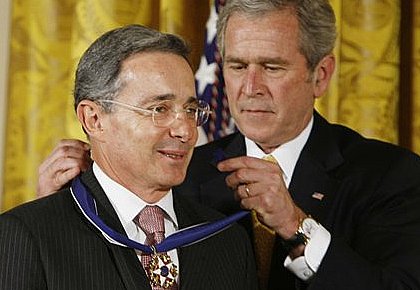 Former President Álvaro Uribe – the target of a politically motivated sham case in Colombia where he was arrested without charge — is the only Latin American among a small group of foreign presidents who have received the highest civilian honor of the United States, the Presidential Medal of Freedom.

President George W. Bush presented the honor to then-President Uribe in January 2009, making him the first and only Latin American head of state to receive the honor to date, and among a small handful of non-U.S. citizens among the 599 recipients to date.

“Early in this decade, the Republic of Colombia was near the point of being, at best, a failed state — or, at worst, a narco-state,” Bush said at the ceremony. “In those conditions, it took more than ambition and ideals to run for political office — it required immense personal courage and strength of character.”

“President Uribe’s leadership has been resolute and uncompromising. Today in Colombia, homicides are down 40 percent, kidnappings are down more than 80 percent, terror attacks are down by more than 75 percent. The forces of violence are on the defensive, and the people are reclaiming their country,” President Bush said. At the time, Uribe’s defensive of the democratic government against the terrorist Revolutionary Armed Forces of Colombia (FARC) had nearly destroyed the guerrilla insurgency.

Uribe was inducted with the following declaration, read out by an honor guard at the White House, as Bush adorned Uribe with the civilian medal:

“As President of Colombia, Álvaro Uribe has championed the rule of law in a country that endured decades of violence at the hands of illegal armed groups. He has demonstrated a deep commitment to the prosperity of Colombia’s people, and his bold policies have spread democratic values and established the foundation for lasting peace throughout Colombia.

He has been a courageous partner of the United States. And under his leadership, Colombia has become a model for countries seeking reconciliation and the establishment of a society based on respect for human dignity.

The United States honors Alvaro Uribe Velez for his commitment to freedom, democracy, and the rule of law.”

The U.S.-Colombia alliance against international criminal organizations and terrorist threats in the region – built in partnership with Uribe — is vital to the national security of the United States, and a bipartisan priority for the U.S. government. The sham “case” against Uribe in Colombia, based on groundless accusations without evidence, is just one chapter in a decades long political campaign by the FARC and their principal ally, Senator Iván Cepeda, to reverse the success of the U.S.-Colombia partnership and dismantle bilateral cooperation in the fight against drug trafficking. The stakes are too high for the United States to let the FARC and their allies succeed.