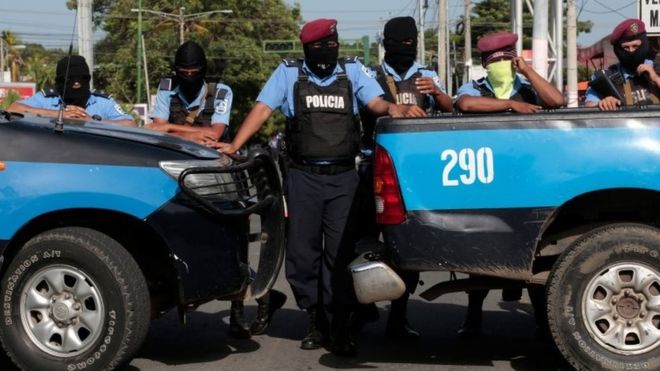 The United Nations Human Rights Office has published a scathing report into alleged human rights violations committed in Nicaragua in the wake of a wave of anti-government protests.

Hundreds of people have been killed and thousands injured since April.

The Nicaraguan government has rejected the report as “biased”.

What does the report say?

The report covers the period from 18 April, when protests first kicked off against now suspended plans to change the social security system, to 18 August.

But they soon turned into wider calls for the resignation of President Daniel Ortega.

The UN report says that in the first phase of the crisis there was “a repressive response to the protests by the police and pro-government armed elements”.

“During the second ‘clean-up’ stage, from mid-June to mid-July, police, pro-government armed elements, including those known as ‘shock forces’ (fuerzas de choque), and mobs (turbas) forcibly dismantled roadblocks and barricades.”

The UN Human Rights Office says that information it has obtained “strongly indicates that these armed elements acted with the acquiescence of high-level state authorities and the national police, often in a joint and coordinated manner”.

During the third and current stage of the crisis, government opponents have been “persecuted and criminalised”, the report states.

“Civil servants, including teachers and doctors, have been sacked, and people seen to be critical of the government have been harassed, intimidated and even attacked.

“The authorities, including at the highest-level, have increasingly stigmatised and discredited protesters and human rights defenders, describing them as ‘terrorists’, ‘coup-mongers’ or ‘plagues’.”

Was all the violence one-sided?

It says that 22 police officers were killed between 19 April and 25 July out of a total of about 300 reported deaths.

It also notes that “the level of brutality in some of these episodes, including burning, amputations and desecration of corpses illustrates the serious degeneration of the crisis”.

It also states that the roadblocks erected by protesters “gave occasionally rise to criminal practices, such as kidnappings, harassment, robbery and collection of illegal tolls”.

The report urges that an investigation into those abuses be carried out but states that they “do not legitimise in any way a response by the state that is not in line with international human rights law”.

What allegedly happened in detention?

The UN Human Rights Office says that it has received numerous accounts alleging acts of torture and ill-treatment of detainees carried out by police or prison authorities.

It says that there are indications that some detainees were burned with Taser guns or cigarettes.

Female detainees alleged that they were raped and that threats of sexual abuse were “common”. Male detainees reported being raped with rifles and other objects, the report says.

What does the Nicaraguan government say?

It has strongly rejected the report and says that it has ignored the violence aimed at overthrowing the democratically elected government.

The government statement denies there have been any documented cases of torture or sexual assault and states that all detentions were carried out in accordance with the law.

The government also argues that the killings of the 22 police officers prove that the anti-government demonstrations had not been peaceful.

The High Commissioner for Human Rights has called on the Nicaraguan authorities to carry out investigations into the allegations. According to his office, the state authorities have so far failed to properly investigate protest-related deaths.

The Nicaraguan government said that peace had been restored to the streets.