HomeNewsTours of the green Medellin
News

Tours of the green Medellin 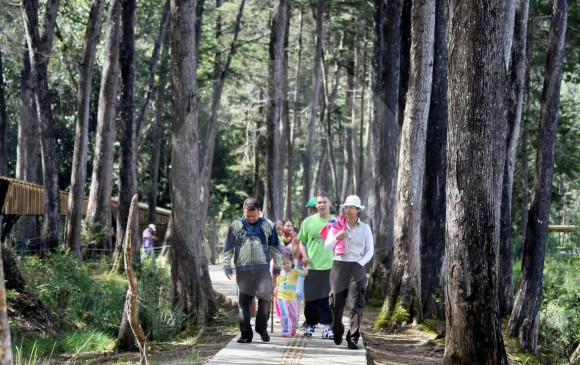 The greatest natural charm of Medellín is nestled in the mountains, between the valleys of Aburrá and San Nicolás. This is Arví Park, a 1,761-hectare reserve that is connected to the city through a metrocable and which, according to a study conducted by the Mayor’s Office in 2017, is one of the places that visitors remember most about the city.

Ryan Bell read about the park from his home in California and thought that his trip through Latin America had a stop there. “A friend took the bike tour and the photos he shared on his social networks are beautiful.

But I was more impressed when I said I was 20 minutes from the city and that I could get there from the subway. It is amazing, ”he said. Bell signed up to repeat his friend’s plan.

Last weekend he boarded the subway at Parque Berrio station – he spent the first two hours of the day within the term of Botero’s sculptures – and after making the transfer at Acevedo station, he paid $ 6,000 to travel by metrocable. “The view was the first gift. Seeing from the air how the city fades and is replaced by trees is something unique in the world, “he said.

Upon arrival, at the Ignacio Vélez Escobar Cultural and Environmental Center, he tasted the mortiño (agraz) wine he sold to the peasants, ate two empanadas and walked along a pre-Hispanic path that surrounds the site. A couple of hours later he went to the park ticket office and bought a ticket for the bike tour, which takes place on weekends and holidays at 2:00 p.m.

During the tour they told him about the history of the park and told him that it was a place of passage for the natives who moved between the Aburrá and the East of Antioquia and, then, those same roads served for the silleteros ancestors to lower their flowers for the Sale in the city. The trip lasted two hours in which they recorded six kilometers by ancestral paths, waterfalls and streams.

As the weather in the area is cool, the trip was quiet, with some stops for hydration. The tour, with bike rental and guide, cost $ 30,000. But if the spirit of adventure is greater, you can take the “between wheels and roads” route that records 9.5 kilometers in 2.5 hours. The park offers other options for the less adventurous: from bird watching and picnic, to hiking and archeology make up the offer of the place.

In addition, several local travel agencies offer the possibility of doing the tour and ending it with a visit to the silleteras farms of Santa Elena that, for these days of the fair, are full of flowers. Trees and buildings Sandra Viviana Giraldo, undersecretary of Tourism of Medellín, explained that Arví and the silleteras farms are on the list of 10 must-see activities.

“In the study we did in 2017, we realized that foreigners valued the environmental component of the city a lot: see the buildings between trees and nature and be able to explore, after a relatively short tour, cultural and environmental spaces such as those offered by Arví ”, He said.

Within the park, the third most visited tourist information point in Medellin operates (on average it serves 120 people per day) and there the citizen is oriented on how to carry out the activities or which tourism service providers can guide them. “The visits to the park are complemented by the gastronomic offer, which is growing, and with the silletera tradition,” he said and recalled that so far this year almost 70,000 foreigners have visited this nature reserve.

Another option is to visit the Botanical Garden, which is accessed from the University station and has 13.2 hectares with more than 1,000 plant species planted around a lake. And if the available time is shorter, Giraldo recommended taking a tour of the Center where, in addition to the urban transformation, visitors can get to know some of the 30 green corridors, in which 8,300 trees have been planted.

That greening plan was awarded in June with the international recognition Ashden, granted by the NGO that bears the same name, in the category “Cooling by Nature”.

share on Facebookshare on Twitter
Alfredo Ramos increases favoritism for the Mayor’s Office of Medellín, according to Guarumo
300 tons of guacamole were sent to Europe from Medellin