They launch special centers in Medellín to fight against smuggling 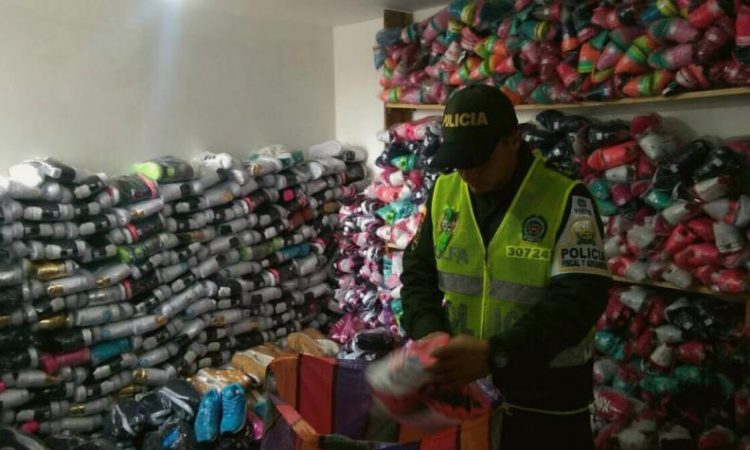 One million contraband units valued at 26.772 billion pesos were confiscated in Fiscal and Customs Police operations, between January 1 and June 16 of this year, in the El Hueco sector, in the center of the city. The most affected sector is that of garments, with more than 900,000 garments seized, followed by cigarette packs and footwear. However, there are also cosmetology, leather goods, electrical and electronic, automotive and auto parts, pharmaceutical and liquor products.

During this year, in actions against contraband in Medellín, interventions have been made in 205 establishments and 145 warehouses used as collection centers for illegal merchandise. Also, in joint work between the Police, the Office of the Prosecutor and the Directorate of National Taxes and Customs (Dian), four raids have been achieved, the dismantling of a criminal structure dedicated to this crime and the capture of eight people who for the crimes of for the crimes of favoring contraband, brand falsehood and usurpation of industrial property rights.

In these places it is sought to have greater force in the fight against this crime, through cooperation strategies and alliances of the authorities with public-private entities and unions of the Aburrá Valley. Everything, to unify the technical and operational capacities of each one.

“The main objective of these integrated centers is to articulate inter-institutional actions for operational deployment at a regional level, the dismantling of criminal structures, the collection of analyzes, the articulation of fixed, mobile and border control posts, thus allowing the chains to be affected. criminal activities linked to the smuggling of merchandise, the laundering of assets and tax evasion, “said Brigadier-General Juan Carlos Buitrago, director of management of the Fiscal and Customs Police, who led the launch of the strategy.

This initiative includes the linking of entities such as Fenalco Antioquia, the Chamber of Commerce of Medellín, the Intergremial Committee, the Colombian Association of Footwear Industries, Leather and its manufactures (Acicam), the Colombian Chamber of Apparel and Related Products, the Fashion, the Government of Antioquia, among others. The main objective of these integrated centers is to articulate inter-institutional actions for operational deployment at the regional level.

These entities associated themselves with the initiative because they consider that smuggling is one of the hardest scourges against the productive and commercial activities that the country’s industry develops legally.

The general also said that these integrated centers will operate in the facilities of Dian de Medellín and will be complemented from the central level of the Fiscal and Customs Police of Bogotá, in order to generate follow-up and deployment in the national territory.

In this regard, Claudia Gaviria, sectional director of Dian Medellin, said the strategy allows for more effective results in the different methodologies used by criminals engaged in smuggling. He highlighted advances in intelligence and technical tools of institutions to counteract crime. El Cippa has nine integrated units, two of them located in Medellín.

share on Facebookshare on Twitter
In June, Medellín registered a 32% reduction in violent deaths
In October, 200 electric taxis will begin to circulate in Medellín