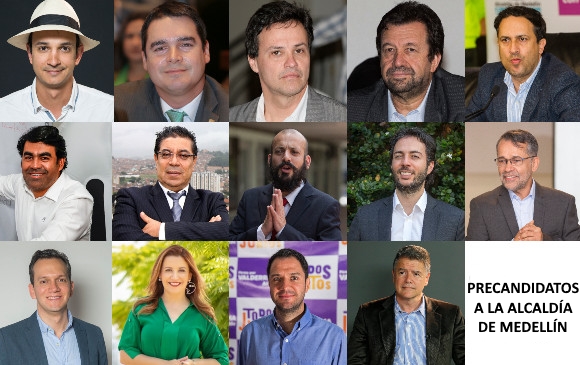 A race against time, against skepticism and for the search for credibility these days face the 22 aspirants to the main public offices of the department: mayor of Medellín and governor of Antioquia. From today, until July 27, the end of the registration of candidates before the Registrar, the campaign will intensify and applicants will see their letters to keep the Antioquia power. It will be a month of visibility, definitions and consolidation of alliances. The daisy will be stripped and, of the 22 aspirants, some will end up allying themselves and, as usual, will fall 3 or 4 with firm aspirations. These are the faces of the pre-candidates today (see photos), 14 to the Mayor’s Office and 8 to the Governor’s Office.

While the list is being debugged, so is the political game. The explosion of the signatures The modality of seeking public endorsement and disengaging from traditional parties is the most attractive strategy. It is the first time that the city and the department are witnessing the proliferation of significant groups of citizens, movements that the candidates create to go out to collect signatures – 50,000 is what is required by Law 30 of 1994 – and to advance this way , part of your campaign. To date, for the Mayor’s Office of Medellín there are six candidates who chose this method: Santiago Gómez, César Hernández, Santiago Jaramillo, Daniel Quintero, Juan David Valderrama and Juan Carlos Vélez. For the Government they collect signatures: Aníbal Gaviria, Mauricio Pérez and Mauricio Tobón. To them, Rodolfo Correa, who announced that he would seek the coaval citizen, despite having already obtained the approval of the Independent Social Alliance (ASI), joined him a week ago.

For Jaime Alberto Carrión, professor of Political Science at the National University, so many significant groups are a guarantee of plurality, but they are wearing thin. “There are candidates who, despite having the backing of a party, are collecting signatures and distorting advertising periods. They started an electoral campaign since the beginning of the year (before the dates that the law contemplates for candidates of parties) and that should not happen, “said the analyst. Juan Carlos Escobar, professor at the Institute of Political Studies of the University of Antioquia went further on the committees by signatures. For him, they are desired in the electoral, but have bad consequences in terms of government. “As they do not become firm structures, they lack long-term public policies, the clearest example is the mayor’s office of Federico Gutiérrez, the councilors who accompanied him with Creemos, are no longer there,” he said. River scrambled to the Mayor’s Office Many names in the race, most of them debutants and others who still wait for the endorsement of their matches.

The panorama of the dispute over the Mayor’s Office of Medellin continues to be scattered, with the latent possibility of alliances between pre-candidates who share ideology. Alliances are speculated in all sectors to have extra air that allows them to appear in the surveys and reach until October. That they hope, if the results are not given in the measurements, they will go, with their political capital, to support another one looking for a bureaucratic backup, as it usually happens. According to Carrión, “for the mayor’s office the problem is not to present oneself, it is to make the biggest alliance in the city. The last mayorships show that those who won were able to get together, even with antagonistic sectors. ” Without the campaign having begun formally, the attention has been paid by the firms, who started delivering them at the Registry Office since yesterday. Santiago Gómez, ex-secretary of the Government of Medellín and self-proclaimed successor of Federico Gutiérrez, has not been very mediatic, does not listen and does not see himself, nor does he appear collecting signatures. César Hernández, ex-manager of Metroplús, will present around 130,000 signatures today; the controversial councilman Santiago Jaramillo, expelled from the Democratic Center, will deliver them on July 19.

For its part, the former ICT minister, Daniel Quintero, collected about 200,000, took them yesterday, and the representative of the House of the Green Alliance, Leon Fredy Muñoz, advocates the endorsement of that party for him. The former director of the Inder, Juan David Valderrama, began with the collection since February, said he will submit more than 110,000 signatures next week and added his team to the exgerente EPM, Federico Restrepo. The ex-senator and excandidato to the mayoralty, Juan Carlos Vélez, who recently received the adhesion of academic Enrique Olano, delivered 188,000 and said that he would receive support from leaders of other parties. The other precandidates are: Carlos Ignacio Cuervo, registered by the Conservative Party, a group that could give coaval to another candidate; former Congressman Víctor Correa, for the Democratic Pole; the councilman Jesus Anibal Echeverri, for the Party of the U; the former Jairo Herrán, for Colombia Humana; former Secretary of Government Jesús Ramírez, for Mais; and former senator Alfredo Ramos, for the Democratic Center, who won the party’s internal process after forums and polls.

They, being endorsed by parties, have not given formal campaigns to their campaigns, although Ramos points at the top. Councilman Jaime Cuartas and former Viva manager Beatriz Rave are also pre-candidates, who dispute the endorsement of the Green Alliance, as well as the support of former presidential candidate Sergio Fajardo. The analyst Escobar, considers that Fajardo’s strategy was late. “To configure the political cadres in the regional thing it should have done 15 years ago, to give political structure to its movement so that it does not depend exclusively on its image. Now he’s doing it, but something late. ” The alternatives: Correa, Herrán and Ramírez, at the close of this edition, planned a coalition of the left for the Mayor’s Office. Reorganization of forces The departure of the former mayor of Medellín, Aníbal Gaviria, moved the electoral board to the Government of Antioquia since 2020.

Although Gaviria began collecting signatures, yesterday the Liberal Party confirmed that it grants the endorsement. He was even open to receive more party backups. It is the example of the candidate who collects signatures, campaigns before what is allowed by the law protected by the significant movement of citizens and ends up backed by traditional parties. Rodolfo Correa, candidate of the ASI, sat down to talk with the ex-manager of the Idea and representative of the continuity of Luis Pérez, Mauricio Tobón, and there is still expectation. A similar case would take place between the ex-candidate for mayor, Héctor Hoyos, for the Democratic Pole, and the former Secretary of the Government of Medellín, Juan Felipe Palau, pending the endorsement of the Green Alliance. Mauricio Pérez, former manager of the Idea in the administration of Fajardo, is the former governor’s choice and also entered the bid for the green guarantee.

They are also aspiring to the Interior, by political parties: Andrés Guerra for the Democratic Center, who repeated candidacy and won the democratic mechanism proposed in the uribismo, and Juan Camilo Restrepo, former president of the Banana Association of Colombia (Augura) and candidate for the Conservative Party. That is the picture of the moment, in 30 days the registration period closes, the campaign will take off and the winning cards will begin to appear.