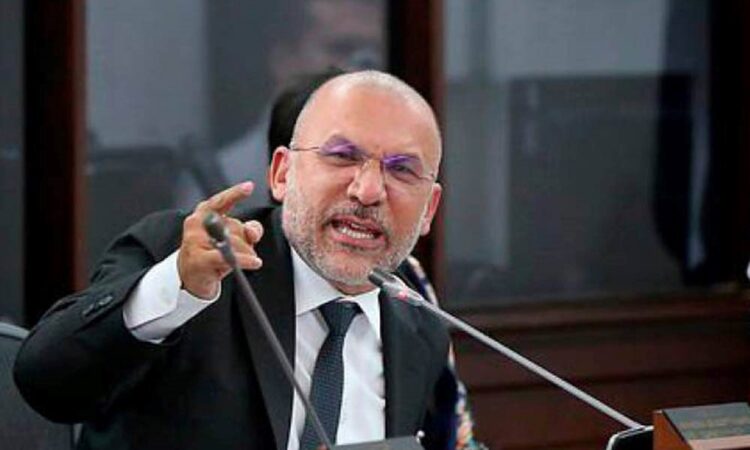 In the network of complaints of corruption that surrounds Senator Roy Barreras, a name appears that is key to the investigations of the Supreme Court and the Attorney General’s Office, for the embezzlement of ESAP: Giovany Javier Chamorro Ruales, former director of that entity (appointed by the hypocrite Juan Manuel Santos at the time), and that, before occupying that position, he was head of Roy’s campaign to the Senate, and, later on, a member of his UTL. Those cited here will say that Dr. Chamorro came to ESAP on his own merit; but it doesn’t matter: if Timochenko and his comrades from the FARC now act as moral beacons, the “furtive poet” and his trustees can say anything.

Chamorro was appointed from the presidency of the false peace supposedly by “contest” in the Superintendency of Industry and Commerce, and a few months later he was in charge of the Directorate of ESAP, where he remained until the change of government. During that period in command of the School of Public Administration, according to the complaint that I attach (see complaint) Roy and his ward, seconded by other partners, made whatever they wanted: in total there were 14,009 agreements and contracts that are under the magnifying glass of justice, the sum of which amounts to the “small amount” of 1.2 billion pesos. According to the complainant, between 2016 and 2018, Roy Barreras had directors and senior officials appointed to exercise absolute control of contracting at ESAP. Eventually, the accused will have to answer for the crimes of illicit interest in the conclusion of contracts, illicit enrichment and conspiracy to commit a crime. Let’s not lose faith.

In the illegal arrangements, engineer Jorge Uriel Silva Salazar, a local from Cali and Roy’s close friend, always mediated. The mess was “processed” through the OCÉANO program, and, in some way or another, contracts were always made with companies from Cali. For the ESAP union (see press release), the front men of the “furtive poet” are Fernando Medina Vargas, Eduardo Rojas and the citizen overseers Juan Carlos and Germán Calderón España, at the time representatives of inexperienced companies that ended up benefiting from multimillionaire allotments and generous advances, which went into the pockets of a certain abominable lizard. The gang meetings to square up the “things” were held at the TRYP Hotel in Bogotá and in two offices also in the capital, located at Carrera 13 No. 29-41, Edificio Capital. These meetings were attended by the senator’s wife, who was appointed to a high position in the Prosecutor’s Office by the sinister Eduardo Montealegre.

If you want to find the perpetrators of a crime, you have to follow the money trail. It is very easy to do it: money leaves an almost indelible mark. It would suffice for the investigators to cross-reference the assets that Roy has, his closest relatives, and those that appear indicated in the summaries; then they must compare that data with the income of each one and… eureka!: the truth will arise, like a torch of certainties to illuminate us.

Coincidentally, Roy did not provide the complete information required by the law 2013 of 2019, which he helped create. In the respective format of the Public Function, the known phony does not detail the location of his assets, does not relate the economic activity of his relatives (4th degree of consanguinity, 2nd degree of affinity) and does not report his bank accounts and their amount (see format). I honestly don’t think any of those mentioned in this column will hold up to a CAI check.

Roy, who has bathed in all the “downpours” (CAPRECOM, SALUDCOOP, ESAP and the Havana Accords), is still plump in Congress; his wife, fix in the Prosecutor’s Office, and Chamorro, head of internal control of the SIC.

It is, without a doubt, a great challenge for justice; But nobody said it was easy to take down the worst of all mafias: high-level corruption.

share on Facebookshare on Twitter
THE INCOHERENT, LIAR AND CHEATER ROY BARRERAS
ROY BARRERAS, THROUGH THIRD PARTIES, SEEKS TO STAY WITH THE CLINICS CONFISCATED FROM SALUDCOOP