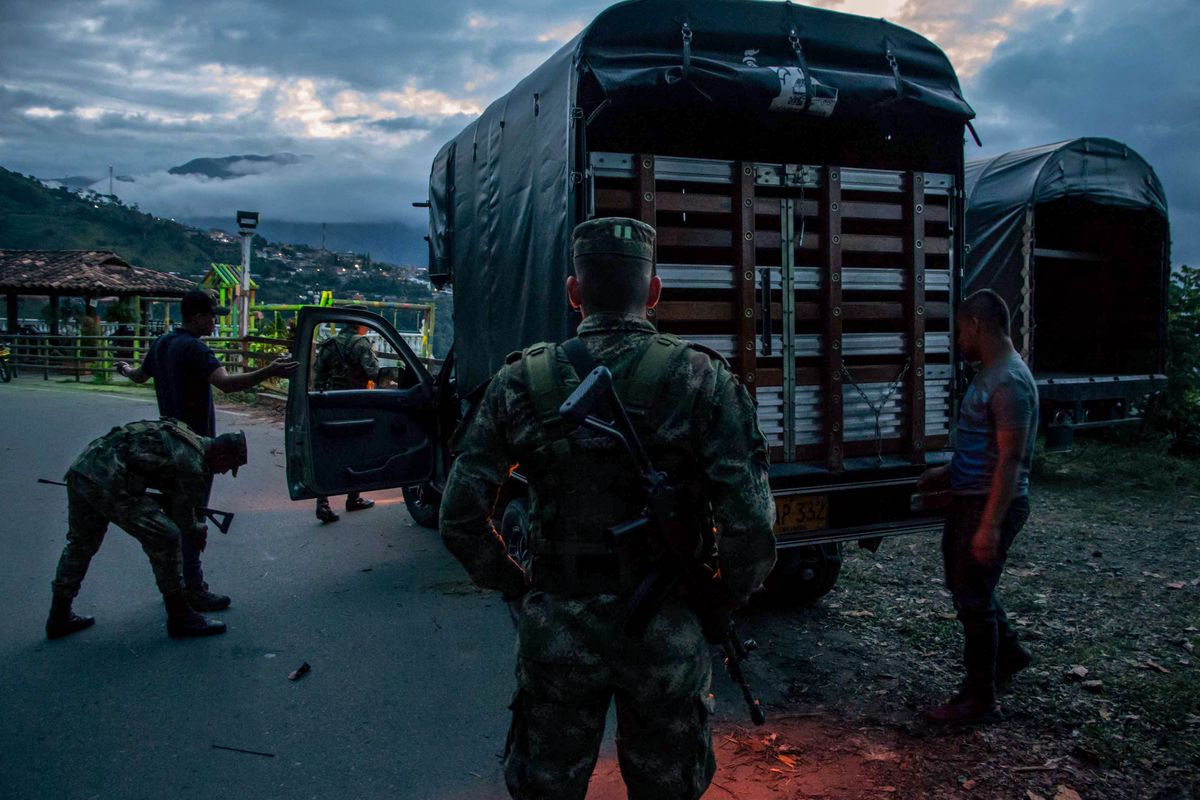 In the far north of the Colombian Andes, where for decades Marxist rebels controlled cocaine production and battled the army, a widely-praised 2016 peace accord was supposed to change everything. It has — for the worse.

Promises of new security measures and crop substitutes have gone unfulfilled. Where once there was brutal — but clear — rebel rule, there is today a cacophony of drug-trafficking mafias, each charging farmers so much protection money that coffee, cattle and even cocaine are barely profitable. Former guerrillas are re-arming, the homicide rate is skyrocketing and hundreds are fleeing, emptying schools and businesses.

“What’s happening is a criminal reconfiguration for the control of territory and illegal economies,” said Ariel Avila, a political analyst at the Peace and Reconciliation Foundation in Bogota. “No one counted on the government being so slow in arriving in this area.”

The government spent four years negotiating an agreement with the Revolutionary Armed Forces of Colombia, or FARC, earning outgoing President Juan Manuel Santos a Nobel Prize. But then the state effectively abandoned Ituango and other FARC zones. President-elect Ivan Duque, who takes office on Tuesday, is facing record cocaine production, a countryside overrun by private armies and a spreading FARC dissidence.

Duque says that coca, the raw material for making cocaine, is an “existential threat” to the nation, which he will combat using aerial spraying with herbicides and by forcibly digging it up, as well as with substitution programs. This is music to the ears of the U.S. government but will deprive many local families of their only source of income.

Key pledges in the peace accord were never put into action. As soon as the FARC stepped back, paramilitary groups entered Ituango, moving through farms and hamlets in groups of a dozen or more. Not a single coca shrub has been dug up here under the promised crop-substitution program. Projects meant to create work for former guerrillas haven’t materialized.

“They left us with nothing but our underpants,” noted one former guerrilla, who said that both the dissidents and a drug cartel have tried to recruit him. The cartel offered him 800,000 pesos ($280) a month, he said.

The government said that the peace deal would boost growth by at least half a percentage point per year, but so far there’s been little sign of any such “peace dividend.” Colombia’s economy expanded last year at its slowest pace since the global financial crisis.

A former FARC fighter calling himself “Rogelio” gave up on the peace process and left a United Nations-monitored camp for demobilized FARC fighters and set up a new guerrilla force at the end of last year. Rogelio is one of more than 1,000 of some 13,000 FARC members who took part in the peace process that have now taken up arms again, and their ranks have also been swollen by new recruits. The re-appearance of the guerrillas in the region triggered a frenzy of violence from the cocaine-trafficking group known as the Gulf Clan, or Gaitanistas, which is murdering anyone suspected of helping the dissidents.

“We decided to continue the struggle due to the government’s failure to comply with the peace accord and due to the murders of ex-combatants and social leaders,” a member of Rogelio’s group who identified himself as alias “Picino” said in reply to written questions.

Rogelio, who walks with a prosthetic limb after losing his leg to a mine, declined an interview, saying the intensity of the fighting made it impractical. A separate FARC dissident faction led by alias “Cabuyo” also operates in the region, as well as at least one other drug cartel, according to police.

“I want to get out of this hell,” said one woman, speaking outside the Ituango funeral parlor after her 18-year-old son was murdered, apparently by the Gulf Clan.

In Ituango, local farmers and businesses used to pay protection money to the FARC. Now, they receive competing extortion demands from different factions and risk death if one group hears of a payment to its rivals. Paramilitary groups are charging farmers 100,000 pesos ($35) per head of cattle, according to one local business leader, and are expected to impose a crippling “tax” on the upcoming coffee harvest.

And whereas the FARC used to levy a “tax” on the trade in coca paste — a type of unrefined cocaine produced by the farmers — the Gulf Clan will often buy the paste on credit then decline to pay for it, saying the shipment was seized by the police, according to one local man whose family has land planted with coca. They also steal chickens, crops and whatever else they need from the farmers.

While the homicide rate has continued on its downward trend in Colombia’s big cities, it has jumped in cocaine-producing regions such as Tumaco on the Pacific coast, Catatumbo on the border with Venezuela and Ituango.

Since the peace accord, Ituango has become one of the most dangerous places on the planet. So far this year, 43 people have been murdered here, up from eight in all of 2016. That makes Ituango, with a population of about 25,000, four times as deadly as El Salvador, the world’s most violent nation.

Ituango has the misfortune to be strategic for the cocaine trade, since near here the Andes mountains give way to the coastal plain that leads to the Caribbean from where the drug is shipped to Central America and Mexico.

The dissidents know Ituango’s mountains and canyons better than anyone and have more combat experience than their enemies, but the Gulf Clan has more money and weaponry. Civilians are caught in the middle.

Locals now live in a state of terror. On the dirt path to the town of Santa Rita, the Gulf Clan has taken to dragging passengers off buses to execute them by the side of the road. They also impose a curfew on the civilian population, forbidding them from traveling after dusk.

Ituango’s Peace Council, consisting of representatives from the community, business leaders, the church and the mayor’s office, suspended its operations in July after receiving death threats. One of its members, Mary Castrillon, recently fled four hours to Medellin following threats to kill her family.

After a man with a gun arrived at Castrillon’s doorstep last year, the National Protection Unit, which provides bodyguard services for people at risk, studied her case, found that the level of risk was “ordinary” and declined to help her.

Community leaders in the region are “the walking dead,” while the families of former FARC fighters have “the whiff of embalming fluid” about them, said Father Carlos Cardenas, the local priest.

At least six former FARC members have been murdered in Ituango since the peace accord, two of them inside the security rings protecting their camp. In February, someone threw a grenade through the window of a family suspected of ties to one of the armed groups, killing a three-year-old girl.

“When the peace process started, we saw a great future for Ituango, people started coming back after many years,” said Gladys Zapata, who works in a local school. “There was a lot of hope, but now, my God, things are worse than they were before.”