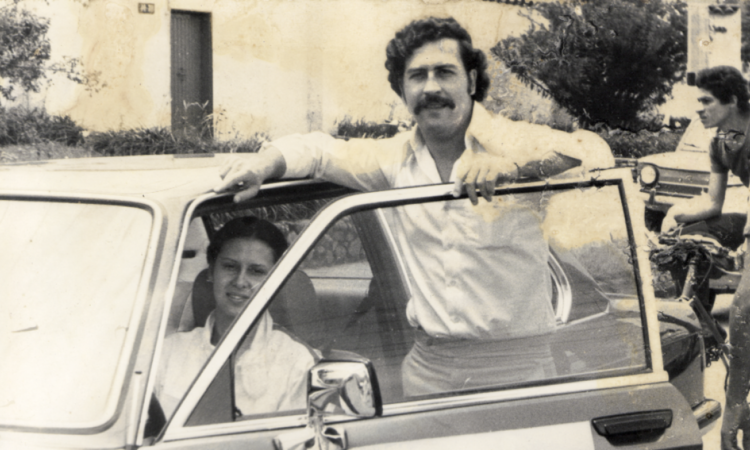 Pablo Escobar always bought things with which he could show that he admired and wanted to emulate Al Capone and believed that those were his charms. In 1979 he began to stand out as one of the main drug lords in Colombia and also began to exhibit his eccentricities. He was an ostentatious man.
He tried to get Al Capone’s granddaughters to sell him a Colt pistol, model 1908, semi-automatic and without hammer, but they wanted to keep these types of pieces that were recently auctioned. He also began his attraction to automobile competitions in the same Reanult 4 that he used to bring coca paste from Peru in his beginnings in the world of illegal drug trafficking. In those adventures he bought several speed cars to participate in his competitions and he began to like luxury cars. He bought a Porsche 356, because he claimed that it was a classic that could not be missed. Its 75 hp engine seemed to him not very powerful but it was the first model manufactured by the German house that produced it from 1948 to 1965.
His brother Roberto “El Osito” Escobar was born in January 1947, just the month Al Capone died, so the month and the year became dates that fed his cabalistic tendencies and superstitions. He was scammed with a Cadillac similar to Al Capone’s, it was a 1928 Cadillac Series 341-A Town Sedan, one of the first armored cars in history, but when he found out it was a fraud, he filled it with bullets and placed it in the entrance of the Hacienda Napoles. Shortly after, he bought a Cadillac that Al Capone never used. It had been given to him by an Italian gangster known as Johnny Torrio for his birthday. On January 6, 1947, it was sent to him but it did not reach him because Al Capone wanted it armored and that would take a few weeks. It was a car of the year but he did not get it brand new because at the end of January he died. Scareface, as Al Capone was called due to facial injuries, was his friend and his most faithful teammate whose end was dramatic for contracting syphilis at the age of 48 that led to a series of ailments that ended in cardiac arrest on January 25, 1947. I had bought it.

Escobar bought this elegant 1947 Cadillac because it was the date of Alcapone’s death and the birth of his brother Roberto. The car was one of the most appreciated by Escobar and was saved from the fire caused by the “Pepes” because Popeye had taken it that night, since the cars moved from time to time to another place. The car ended up at the house of one of his loyal men until that moment, but that night Popeye ran away with a lover and they hoped to arrive at their destination until the next day. When Escobar found out that Popeye had used it, he took a motorcycle from an escort and arrived at the place where Popey was hiding. That day he shot the car to warn him that nothing moved without his consent.

going by the name of John Torrio, Italian Giovanni Torrio, (born February 1882, Orsara, Italy; died April 16, 1957, New York, New York, USA), American gangster turned one one of the main crime bosses in Chicago and one of the founders of modern organized crime in the United States.
Born in a town near Napoles, Torrio was brought to New York City by his widowed mother when he was two years old. He became a brothel-salon and leader of the James Street Boys, allying them with the Five Points Gang (1904-08). He then rose to become a racket boss (i.e. involved in activities involving extortion) in Brooklyn before being called to Chicago in 1909 to operate and expand Big Jim Colosimo’s chain of brothels. In 1919 Torrio summoned his old friend Al Capone from New York to run one of the brothels, and in 1920 he or Frankie Yale murdered Colosimo. Thus, Torrio inherited Colosimo’s empire and immediately expanded into the large bootleg (illegal manufacture, sale, and transportation of alcohol) and gambling casinos of the Prohibition era.

On January 24, 1925, Torrio was shot multiple times outside his home by Bugs Moran and Hymie Weiss, associates of the late Dion O’Bannion, whose death had been engineered by Torrio and Capone. Torrio survived, spending several months in the Lake County Jail in Waukegan, having been convicted of bootlegging (after being set up by O’Bannion). While in jail, Torrio effectively bequeathed Chicago to Capone and then, upon his release, Italy was apparently destroyed. Returning to live in New York, he profitably invested in real estate and helped create a bootleg harvester, becoming a close associate of Lucky Luciano, Meyer Lansky, and other bosses. Torrio was one of the directors of the national crime syndicate or cartel formed in 1934.
As Chicago’s Public Enemy Number One, he was convicted of tax evasion in 1931 and sentenced to 11 years in federal prison. He was released eight years later, weakened and suffering from neurosyphilis. On January 25, 1947, Capone, aged 48, died of cardiac arrest after suffering a stroke. The armored Cadillac he bought was gone by then.

While there is no sure way to tell if Al Capone actually owned this creature, a 1921 Milwaukee Sentinel story traced the car’s license plates back to Mae Capone.

Pablo Escobar is famous for having been one of the biggest drug traffickers in Colombia, the top leader of the Medellín Cartel. Considered one of the richest men of his time, the money he hoarded from his illegal businesses was invested in buying countless mansions and land. However, among his many hobbies was also that of a collector of old vehicles.

Some of the models in his collection are preserved and exhibited at Hacienda Napoles, owned by the Colombian, located in Puerto Triunfo Antioquia. Bullet holes and the aftermath of attacks can be seen on the bodies of the vehicles, a reflection of the violence that accompanied Pablo’s life. His love of motoring led him to compete in the Renault Cup on the 4th of 1979.

Although many of his vehicles were destroyed in an attack organized by “Los PEPES” (Persecuted By Pablo Escobar), these are some of the most characteristic models in the drug trafficker’s collection.

One of the most iconic vehicles in Pablo Escobar’s collection was the Renault 4, a small white car with which “El Capo” began his first smuggling trips to Ecuador. With him he participated and achieved fifth position in the Renault Cup on February 25, 1979.

This model is also known as “the faithful friend” since it was the first car to achieve great commercial and cultural success in Colombia, becoming an icon of the country’s middle class.

Since 1954, the so-called “Seagull Wings” was one of the most successful sports models in the world. A few years later, the production of its convertible version began. It was innovative both in design and mechanics as it was the first car to be equipped with a direct injection gasoline engine.

Also known as the great Mercedes, this luxury vehicle was born in Germany in the 1950s, contributing to the economic recovery of the country. It was a model that stood out, especially for its 624 cm length, it fit like a glove with “El Capo”. Its engine allowed it to reach 250 hp and thanks to this it is considered one of the most powerful post-war models. This model not only passed to Pablo Escobar, but also transported other characters that marked the 20th century: Coco Chanel, Elvis Presley, Pope Paul VI, John Lennon, Fidel Castro…

Among its classics was the luxurious Rolls Royce Phantom I. Production of this vehicle began in 1925 and lasted until 1931. According to legend, it was the car that Pablo Escobar had the hardest time getting.

It was rumored that “El Patron” had bought this model from Al Capone, but Capo himself denied it. With a 16-cylinder engine, Don Pablo wanted to mark it with his own mark by filling it with bullets.

This model was probably the most useful for Pablo Escobar. He provided his private army with these vehicles due to their ability to move through the wildest terrain of Colombia.

Pablo Escobar was one of the most powerful, dangerous and wanted drug traffickers in the world, and when he was at the height of his power, he had a millionaire fortune of 30 billion dollars (equivalent to 64 billion dollars in the US). today) that led him to be on the list of the richest men in the world (currently still considered the richest criminal in history).

With his money, Escobar bought many properties (his nephew even said he found $18 million hidden behind a wall in one of them), a huge ranch, hippos and exotic animals, but his real passion was cars and he had a huge collection. full of classics and iconic and exclusive pieces. He even had a brief “career” as a racing driver in a legendary Porsche.

Pablo Escobar was a fan of Al Capone, so he bought a car very much in the style of the famous mobster, and reports say he even shot him in the side to make it look like he had been in a standoff. The car is styled in the Prohibition era of the 1920s.

1972’s Mercedes S600 Pullman
This oversized car was very extravagant, and not only Escobar used it, it is said that politicians used cars like this for when they had to attend functions and events. The drug trafficker’s car was destroyed by the Cali Cartel during the famous bombing of his house in Medellin in 1988, and, as happened with many other cars destroyed in that incident, it was sent to the Hacienda Napoles, where it became part of an exhibition .

This brand from the United States was very famous for a while and its name comes from Hernando de Soto (an economist from Peru). Escobar is said to have made a very luxurious and expensive version of this model (modified for him), with an engine that reached 109 horsepower. The car had a classic look, which was one of Escobar’s favorites, and was another of the pieces in his collection that always attracted attention).

Escobar supposedly had a 300SL, but some experts said that the remains of the car appear to be from a 190SL, which was another of Escobar’s cars that ended up damaged during the bombing of Cali, which left several models in his collection destroyed. .
This was the centerpiece and favorite of the collection. Escobar’s version was painted bright red (to be as flashy as its owner) and it is said that Escobar used to drive it regularly, until it all ended in tragedy. The car was damaged during a confrontation with one of his enemies (in the famous bombing of Cali) and could not be repaired. It is currently in the Hacienda Napoles, as part of a museum.

Escobar also owned a Porsche 935 V (the first car Escobar raced was a Renault 4, but he later looked to Porsche) and a 1974 Porsche 911 RSR (Escobar is said to have bought the one Emerson Fittipaldi used at the inauguration of the International Race of Champions (IROC), for more than 2 million dollars)