HomeNewsOver 440,000 undocumented Venezuelans in Colombia to get work and residency papers
News

Over 440,000 undocumented Venezuelans in Colombia to get work and residency papers 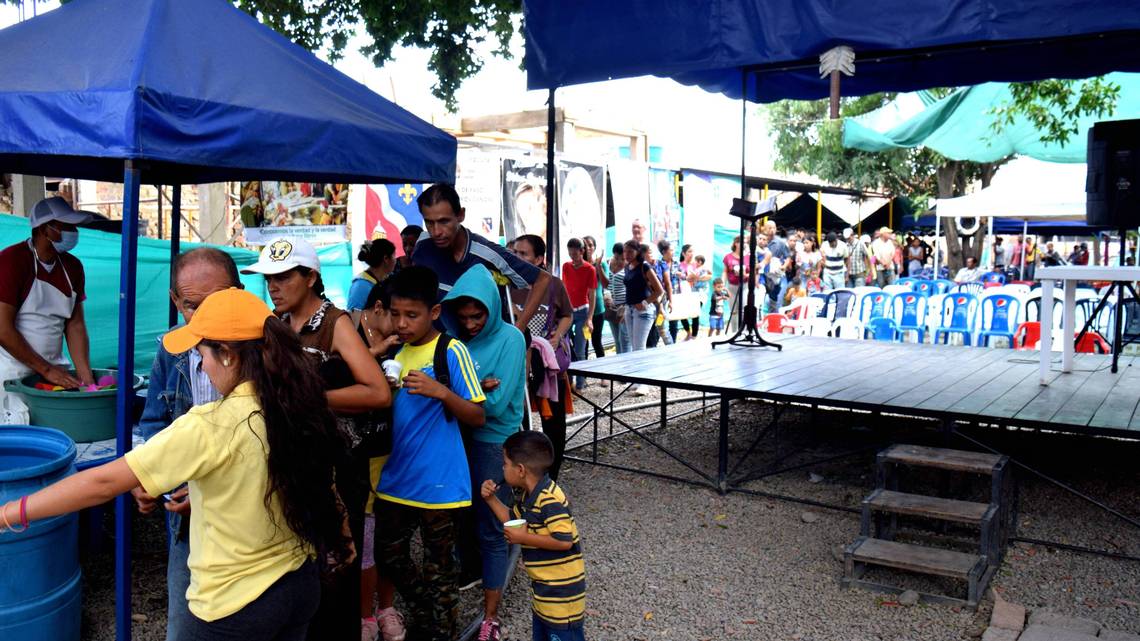 Venezuelans line up for free meals in Cucuta, Colombia. The U.S. Agency for International Development is helping fund the Catholic Church program, which feeds more than 2,700 people a day.

More than 440,000 undocumented Venezuelans living in Colombia will receive residency and work papers under a decree signed by President Juan Manuel Santos Thursday.

In a televised speech, Santos said the measure was a humanitarian necessity for people escaping hunger and disease amid a broad economic and social collapse.

“We condemn the actions of the Venezuelan regime that have generated this humanitarian crisis,” Santos said. “It’s a regime that doesn’t listen and seems to be in total denial.”

Santos said that more than 1 million people have migrated from Venezuela to Colombia in the last 18 months, though that number also includes Colombians who had been long-term residents of the neighboring country.

The Venezuelan exodus has rattled the entire region, with countries such as Peru, Chile, Ecuador and Argentina struggling to keep up with the influx.

Despite sitting on the world’s largest oil reserves, Venezuela’s socialist administration is being pummeled by hyperinflation and food and medicine shortages.

Thursday’s decree covers Venezuelans who registered with Colombian authorities earlier this year during a nationwide census. At the time, critics worried that undocumented migrants might be wary of presenting themselves to authorities.

But for those who risked it, the move paid off. Under the deal, they will be granted two-year work and residency permits and have access to state-run health insurance and education. With this new group, more than 880,000 Venezuelans in total have been issued work permits in recent years, Santos said.

The decree is likely one of Santos’ final acts. He steps down on Wednesday when Iván Duque, a center-right, law-and-order candidate, assumes the presidency. Duque has promised to take Venezuela to task, saying he’ll push for leaders in Caracas to be tried before the International Criminal Court and that he’ll withdraw Colombia from the Union of South American Nations (UNASUR) that’s seen as a tool of Caracas.

On Thursday, Santos called on Venezuela, once again, to accept international aid to be delivered across the border.

“At the very least, allow for a humanitarian channel to open so that the suffering of your people can be somewhat alleviated,” he said. “The entire world is increasingly terrified by what’s happening in Venezuela.”

share on Facebookshare on Twitter
The crop-spraying drones that go where tractors can’t
They fled Venezuela and died far from home. This woman gives them a proper burial.