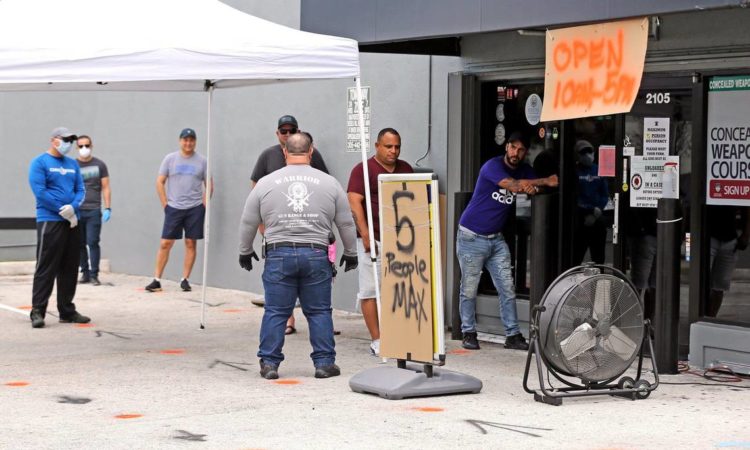 Gun shop owners have never seen such a surge in sales — not after the 9/11 terrorist attacks, not in reaction to mass shootings, not even when Category 5 hurricanes threatened to flatten South Florida.

Fear and uncertainty about the impact of the coronavirus pandemic are motivating people to buy guns and ammunition as they seek protection from possible doomsday disintegration into lawlessness, with home invasions, looting, runs on banks, and fights over food, medicine, hospital beds and shelter across the land.

“Our sales are up 80 percent, with a huge increase in first-time buyers who are worried about martial law, economic collapse, unemployment, shortages, delinquents roaming the streets,” said Alex Elenberg, manager of Charlie’s Armory on West Flagler Street. “If you can’t defend your house and your family, what good are you?”

The United States is the home of the world’s largest gun-owning population per capita, where 40 percent of Americans say they own a gun or live in a household with guns. Even so, concern about the accelerating spread of COVID-19 is causing a spike in sales, according to sellers and data from gun-tracking agencies, such as the FBI’s National Instant Crime Background Check System, which saw a doubling of checks on applicant buyers last week.

In Florida, the number of background checks posted by the Florida Department of Law Enforcement, which closely correlates with the number of gun sales statewide, has risen to unprecedented levels, up nearly 500 percent on Friday alone, with 13,192 checks recorded compared to 2,646 on the same date last year.

“I think it’s a little too knee-jerk on the part of consumers, just like the toilet paper hoarding,” said Jorge Corbato, owner of Nebulous Ordnance Defense in Miami. “Do you really believe this virus is apocalyptic?”

Guns provide tangible comfort in a time of desperation, Corbato said. It’s like people are arming themselves against helplessness.

“Look, to me, a gun is a tool like a fire extinguisher. I’d rather have it than not,” he said. “It gives you a sense of security if the world goes south, sideways, or very bad.”

Corbato, a sportsman and former member of the U.S. Rifle Team, runs a small business with regular customers. For novices coming in over the past week, he has recommended Glock handguns, which he describes as “reliable, in the $500 range,” or, better yet for home protection, a shotgun like the Remington 870, for $300.

“It’s less cumbersome and it’s like a Chevrolet — low-tech, pump-action, doesn’t break,” he said. “In case of an intruder, if they even hear the sound of the gun racking, they’ll run. But remember, these scenarios don’t play out 99.9 percent of the time.

“I’m not trying to scare anybody during coronavirus. I will never convince anybody to buy a gun. It’s a big responsibility, owning a firearm. I don’t relate to the gun nuts or the ‘take it from my cold, dead hands’ philosophy. My customers are level-headed, and if I see someone who is too weird, I won’t sell to them.”

Like many other sellers, Samuel Rivera is running out of inventory at his Gunaholic shop in Hialeah. With sales up 60 percent, his stock of 100 handguns is down to 18. He placed four orders last week but his sold-out distributors don’t know when they’ll be able to replenish.

He’s selling to more women and senior citizens than usual, and is also doing brisk business in tasers, pepper spray and bulletproof vests. He refuses to price gouge, although he’s seen other stores raise prices — charging $25 for a 50-round box of 9 mm bullets that should cost half that.

“The women and the elderly are tired of being victims, and afraid of getting robbed at the ATM or scammed at home,” Rivera said. “I’m not worried about violence and I try to calm all my customers down. I tell them, it’s not like Venezuela. Fighting over toilet paper and Purell — that’s silly panic.”

Charlie Berrane, owner of Charlie’s Armory and the Warrior Gun Range and Gun Shop, said customers want to be prepared for mayhem.

“We don’t know where the virus will lead and we don’t know if we’ll be able to depend on our law enforcement officers to respond,” Berrane said Tuesday, monitoring the line outside his Doral store. “People want to be more self-reliant.”

Only three handguns were left in the display cases at Charlie’s Armory on Monday evening, and some ammo shelves were empty.

Elenberg said soaring sales also followed the school shootings at Sandy Hook Elementary in 2012 and at Marjory Stoneman Douglas High in Parkland in 2018, but those were mostly to existing gun owners who wanted to stock up in anticipation of new gun-control laws that might restrict ownership. Some current buyers are anxious about the federal government invoking emergency powers and halting gun purchases.

“We’ve been pushing Glocks and shotguns that are manageable, but ammunition is getting low, very low,” Elenberg said. “Manufacturers can’t keep up. Delivery services are overwhelmed. There are massive flaws in the supply chain right now.”

share on Facebookshare on Twitter
Who wins and loses in the coronavirus (COVID 19) battle plan?
$15 MILLION REWARD for information leading to arrest and conviction of Nicolas Maduro