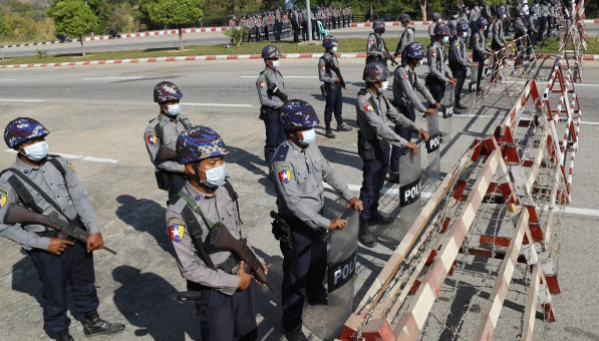 A state of emergency has been declared for one year until the next election is held.

The military has made claims of election fraud in the November 2020 election, in which it saw great losses for its party. The military’s refusal to accept the election results has brought about worries in the past three months.

The commander in chief made a statement on Monday through the military media outlet Myawaddy TV. He communicated frustration with Myanmar’s Union Election Commission, which has claimed that no evidence of voter fraud exists, and he stated that the commission will be “reconstituted.” He also claimed that there were problems with the voter rolls that have not been addressed.

The Myanmar Times reported that access to internet services, phone lines, TV channels, and banks were shut down on Monday by the military.

The official NLD (National League for Democracy) Facebook page posted a letter from Myanmar’s de facto leader, Aung San Suu Kyi. In the letter, she calls for supporters to “protest against the coup” (translation from BBC).

The White House released an official statement condemning the actions of the Burmese military, stating, “The United States opposes any attempt to alter the outcome of recent elections or impede Myanmar’s democratic transition, and will take action against those responsible if these steps are not reversed.”

Hours later, President Biden released a statement reinforcing the White House’s condemnation of the Burmese military’s actions. He stated that “The United States removed sanctions on Burma over the past decade based on progress toward democracy. The reversal of that progress will necessitate an immediate review of our sanction laws and authorities, followed by appropriate action.”