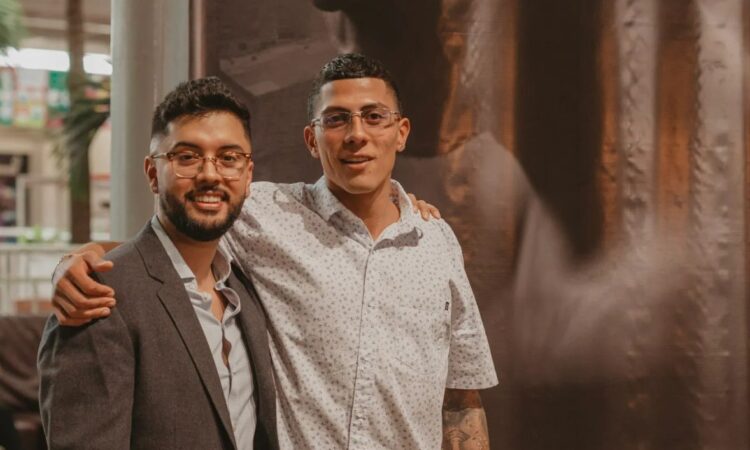 Two months before the coronavirus shut the world down, Matthew Baquero overheard a dinner table conversation in Cartago, Colombia, that sparked an idea that sparked a plotline that led to a screenplay and later to his first feature film, which makes its Florida debut Saturday in Boynton Beach.

The film, “San Pablo,” tells the story of a young market café worker from a crime-ridden neighborhood who dreams of opening a restaurant in Paris after watching a cooking video starring his favorite French chef. But escaping his stifling reality will not be as easy as he imagines.

Baquero, 27, who was born in New York to Colombian parents and raised in West Palm Beach, wrote and directed the film. He shot on location in Cartago’s San Pablo neighborhood on a micro-budget and used no professional actors. The result is a gritty but aspirational story that showcases neighborhood life, the cadence of local Spanish and a cast of locals.

All that on an overheard snippet of conversation at the dining table?

To understand the answer to that question, you’d have to know a bit about Baquero’s creative process. The Dreyfoos School of the Arts and University of Florida graduate, musician and film lover – who believed he would record his first album before shooting his first movie – finds his best creative streaks as a fly on the wall, an “almost omniscient” observer.

He’s the guy who lives life and studies it all at once, the dreamer who extracts narratives from just about everything. He was that kid who’d stop in the middle of a math test to ponder the existential implications of basic questions.

“If the question started like, ‘Jimmy has four marbles. How many does he have to give up to, whatever,’ I’d stop right there and think, ‘Why would Jimmy want to give up his marbles? What’s his motivation?’ And 20 minutes later, I’d still be stuck on that question,” Baquero says. “Unfortunately, this hasn’t always worked in my best interest.”

But that day in January 2020, when he caught the brief exchange between his cousin Veronica Barco and her boyfriend, Julian Piedrahita, Baquero’s rambling mind did work in his favor.

“I gotta go and help my friend,” said Julian.

“I think so,” Julian replied.

It was the way he said it that intrigued Baquero. Julian is this funny, big-personality guy, so charismatic that Baquero asked him whether he had ever acted. (“No, but I’ll keep that in mind,” Julian replied.) That day at Veronica’s house, however, Julian wasn’t in a joking mood.

“He sounded concerned,” says Baquero. “I knew the neighborhood he was going to; it’s a rough neighborhood.”

What could be happening? Baquero didn’t ask. In classic observer mode, he didn’t want to influence the outcome, he says. Instead, he jotted down the overheard snippets, then dreamed up five scenarios. It’s a mind game he plays when something captures his imagination.

The notes and scenarios accompanied him to his home in suburban West Palm Beach, where two months later, Baquero stumbled upon them. They became the basis for his film. He spent many pandemic shutdown hours writing the screenplay. That was the easy part, he says.

“They say that being a screenwriter, you get to play the role of God. A woman can be walking down the street, eating an ice cream, like normal. But then she grows wings and flies away. You can do whatever you want,” Baquero says..

Later stages of movie-making are “incredibly time-consuming and stressful,” he says. “But writing the characters, you’re in your comfort zone. And you don’t have to fire anyone.”

His movie’s main character? He’s Julian, a food-stall cook and operator from a local market. And, yes, Baquero hired Julian, his cousin’s charismatic boyfriend, to play the part. In fact, screenplay Julian and real-life Julian have much in common — including the fact that they both are fascinated with France and both took jobs as debt collectors to save money to move there.

In the film, Baquero’s cousin Veronica plays the role of Luisa, Julian’s love interest, as she is in real life.

Baquero’s parents, Yoly Giraldo and José Gilberto Baquero, are credited as executive producers on the film. They helped Baquero, who used his own savings as well, finance the project.

“I’ve been fascinated by those stories and stories about people with limited resources and the struggles they must endure to just cope. I wanted to tell a story like that as well,” Baquero says.

As the son of immigrant parents, Baquero understands his main character’s desire to seek a better life.

“I know that the longing for something and for going somewhere is so much a part of the immigrant experience,” he says. “There’s a universal quality in it, whether they’re from Japan or Ecuador or Colombia or Cuba. They want something better for themselves and for their family. They’ll do whatever they can do to make that dream come true.”

For his film’s protagonist, the motivating force is a passion for cooking.

“If you’re passionate about something, like food, it becomes a driving force that pushes you out of your comfort zone,” Baquero notes.

He traveled to Cartago to shoot the film in October and December of 2020, completing the final scenes there during trips the following March and April. In all, he shot the film in 25 days. He hired a local director of photography, cast and crew. It took longer than he expected to pull the crew together.

“Pre-production was a disaster,” says Baquero. “I didn’t have enough time. It was chaos, but it was an amazing chaos.”

When the crew finally came together, Baquero had an important message for them.

“I told my entire crew, ‘I don’t care about hierarchy. All I care is that you give me the best effort possible and that we all respect each other. I fell in love with this story and I hope you do, too.’”

He was 25 at the time, looking out on a cast and crew of mostly 20-somethings. Baquero thinks about that now with pride and a sense of accomplishment.

“I’m very proud of this movie. It’s a product of young people giving their best effort and a cast that had never even had a movie camera in their face before. People ask me, ‘Where did you find this actor?’ I say, ‘I found him at my cousin’s house,’” Baquero says.

The shoestring budget forced him to use every resource at hand. He shot scenes at a cousin’s insurance office and at another cousin’s hair salon. He even cast his high school French teacher, Michael Anand-Obleton, to play a French chef named Jean-Pierre Malbec.

Baquero will show “San Pablo” at the Cinemark Boynton Beach 14 on Saturday. He first screened the movie last year at the Studio City Film Festival, where it won a prize for Best Foreign Feature. In February, he took the film to Brooklyn, where it showed at the Alpine Cinemas. In April, “San Pablo” made its Michigan premiere at the Capital City Film Festival.

share on Facebookshare on Twitter
Everything you need to know before visiting Colombia, a country you might never want to leave
Building peace, one project at a time in Colombia