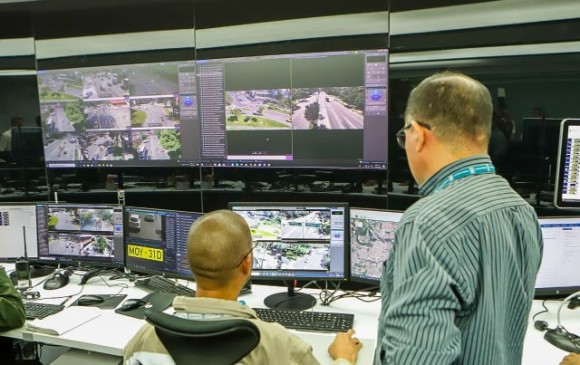 With the immobilization of a taxi involved in a robbery case, occurred at the time, the mayor of Medellin, Federico Gutiérrez Zuluaga, presented on Wednesday morning the strategic system of recognition of plates, which allows the registration of vehicles that they have Reports for having participated in the commission of crimes.

This is the system, which has 400 cameras located in strategic sites, such as main avenues, the Center, the entrances and exits of the city, and the income to the neighborhoods, has allowed 36 positive results since it is functioning. The best example of this strategy to fight crime occurred at 9:30 in the morning of this Wednesday.

At the precise moment in which the local president made the presentation of the screens that record the images of the cameras, live, a taxi was intercepted that, according to the information of the authorities, had participated in the theft to a truck delivering merchandise .

The information allowed to establish that the vehicle had nine entries for various crimes. Gutiérrez Zuluaga pointed out that in the fight against crime in the city it is important to strengthen technology. “When I arrived to my government, the city had 1,300 security cameras and 30 percent of them did not work fully or record in high definition, so what was registered could not be taken as evidence in the Police processes and the Prosecutor’s Office Today we have 2,400 cameras fully functioning and recording in high definition, “he explained. The system works in the following way: the database is processed when there are reports of a vehicle that participates in a theft, be it a motorcycle, a private car or a public service.

Immediately you enter the system and if that vehicle passes before any of the cameras, the screens show where you are going. Immediately, the Police, with their quadrants, begins the operation to intercept it. The cameras have a recording of images with permanence of five years, which means that, if at any date of that time a crime was committed and there is a vehicle suspected of having participated in the event, you can search the record of your passage through a certain place.

The Mayor’s Office, through the Ministry of Security, plans to have 2,763 security cameras in operation by September, 400 of them of this type. The investment in this entire project has been $ 22,379 million. In the operation of the system always participate binomials formed by personnel of the Mayor’s Office and the Police. An advantage of the system is that when the alert is launched, the response time to identify the board involved is a maximum of five seconds.

Since the month of June, when the cameras were activated, 11 freighters have been captured, which is a crime that greatly affects citizen security, the mayor said. “Thanks to all this system, this year, compared to the previous one, we have a reduction of 46% in cases of theft in the mode of flight,” said the president.

A key, according to the authorities, is the timely report to 123, because if there is a vehicle or a motorcycle stolen and in the flight the thieves cross before any of these cameras, they are immediately identified and activated the system of quadrants of the sector for intercept them. The 123, according to the mayor, today receives 27,000 calls a day, with a response time of nine seconds. In 2015, that time was in 28 seconds. The cameras mean something like a shielding of the city against crime, said Gutiérrez, because the movement of vehicles through the city is recorded at all times.

share on Facebookshare on Twitter
In schools they teach not to repeat the violent history of Medellín
In 5 seconds, 300 cameras detect vehicles used in crimes in Medellín