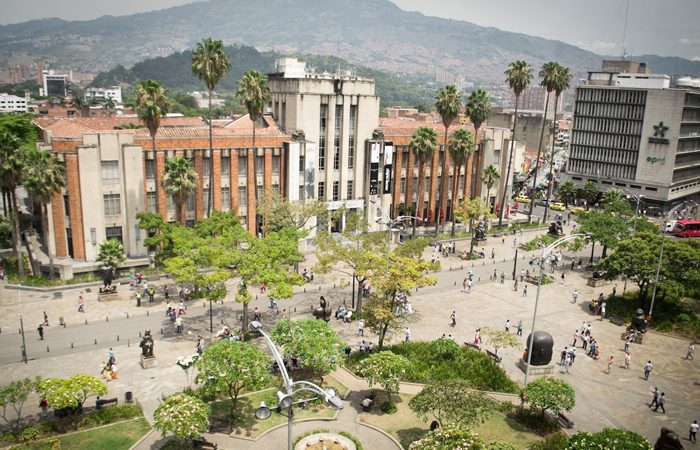 The center of Medellín is one of the points of the city that, if you live in it, must be visited often, and, if you are a visitor, you must visit it in a mandatory way.

This is because there are grouped some of the treasures of the Antioquia capital such as Plaza Botero, with 23 sculptures by the artist Fernando Botero, the Antioquia Museum, second only to open its doors in Colombia, or the Rafael Uribe Uribe House of Culture. But, for a few months, and, despite having a cultural, artistic, architectural and other offer, the center of Medellín began to reform.

One of the priority elements of this new face that is to be given is the environment and the prioritization of the pedestrian, so that you enjoy walking and walking the streets.

Daily, one million two hundred thousand people mobilize around that place, which they call the largest neighborhood in Medellín. Pollution and air quality have long been concerns of the Paisa administrations. Therefore, much of the new face that the center has is focused on offering more options to pedestrians and also encouraging the use of the bicycle.

In the case of Paseo Bolívar, for example, a real extreme change was made. A total of 56,000 square meters were intervened to create an open area that has 70% of its space dedicated to the mobility of people who go on foot or by bike and the remaining 30% to cars, motorcycles and buses.

This corridor connects the center points such as the Nutibara square and the Museum of Antioquia with San Juan Avenue through a commercial promenade, where informal vendors were relocated and placed in organized booths with the new design .

At the time the platforms and commercial businesses and restaurants were expanded, gardens were added designed to improve and level the temperature in a site of much agglomeration. This new Paseo Bolívar also brought something old. These are vestiges of the aqueduct of 1840 that was the channel through which the sector was provided with water. The Mayor’s Office placed safety glass above these points so that they are visible to pedestrians.In part, this discovery was made thanks to the fact that the sewer replacement and maintenance works, which began in 2015, were made using trenchless technology, which using robots and machinery, drills as little as possible on the surface and concentrates the most of the work 20 meters underground, almost without the citizens knowing about the works.

For this work, 70% was completed without deep excavations. Another area of ​​the center that was intervened was the Avenida Oriental, one of the most important road arteries in the city. There, work was done to replace the cement of the road separator with green. The green of the grass and the trees. Almost 5,000 square meters of green again. For six months 179 trees, 376 palms and 92,830 smaller plants were planted in the 2.3 kilometers of road separator, which of course includes the center.

But the green and wildlife that it brings are not the only attractions of the center. Although there are new pedestrian paths, such as those opened in the area of ​​La Playita, the cultural offer is very wide. Only in the center of Medellín can you find seven museums, including the Antioquia Museum, the Casa de la Memoria Museum, the San Pedro Cemetery Museum, the Medellín Filanthetic Museum, the Water Museum, the University of Antioquia Museum and the House of the Rafael Uribe Uribe Culture.

share on Facebookshare on Twitter
Ramos, from Uribismo, is the one who sounds the most for the mayor of Medellín
In 15 days they premiere Túnel de Oriente, in Medellín