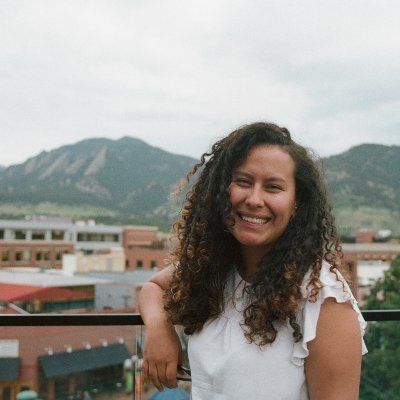 Anyone who hears Lina C. Pérez-Ángel talking with passion about geochemistry and paleoclimate in the tropics may not guess that as a teenager, she wanted to study gastronomy and become a chef.

“That wasn’t an option, so I started studying engineering—literally because my mom told me to,” she said. That initial undergraduate course in environmental engineering was an open door to the geosciences, which she quickly fell in love with. Pérez-Ángel changed her academic course and in 2015 graduated with a degree in geosciences from the Universidad de Los Andes in her native Colombia.

Pérez-Ángel met University of Colorado Boulder (CU Boulder) geoscience professors Julio Sepúlveda and Peter Molnar when organizing a field trip to Colombia for their group, and they became Lina’s doctoral advisers at CU Boulder not long after.

But her path into the academic world had started before graduate school. “During my last undergrad year, I started to engage with research work from several professors. I realized that I really enjoyed research and reading scientific papers—it was all like a mystery-solving game. It had never occurred to me that you could get paid to solve mysteries!” she said.

The mysteries Pérez-Ángel investigated during her Ph.D. involved what happened to climate in the tropics (specifically in what is now Colombia) during the Pliocene. “The tropics are hard to study because, in terms of temperature, fluctuations are really minimal.…There’s a lot of paleoclimatological data on mid- and high latitudes, but not so much for the tropics,” she said.

Pérez-Ángel’s research in paleoclimatology has contemporary relevance. During the Pliocene, between 5 and 2.5 million years ago, Earth’s atmosphere had about 400 parts per million of carbon dioxide—pretty similar to what we have now. She uses bacterial lipids and other biomarkers on rocks to see how ancient rains, floods, droughts, and temperatures affected the environment then and compares the results to recent data to see how these processes were different from what is happening now.

Having defended her Ph.D. in April, Pérez-Ángel wants to dig deeper into that research but has a broader sense of purpose as well. There is some gender balance in the geosciences in the United States, she said, but there is still a long way to go for more cultural diversity. In many academic settings, Pérez-Ángel was the only nonwhite woman in the room, she said. “The GeoLatinas group offers a lot of support, as also talking to my colleagues from other countries. My advisers have also helped me a lot in having a voice,” she said.

“I feel very proud of being a Latina born and raised in Colombia who’s studying her country—and have a different perspective from an older, white man who goes to Colombia on exploration.”