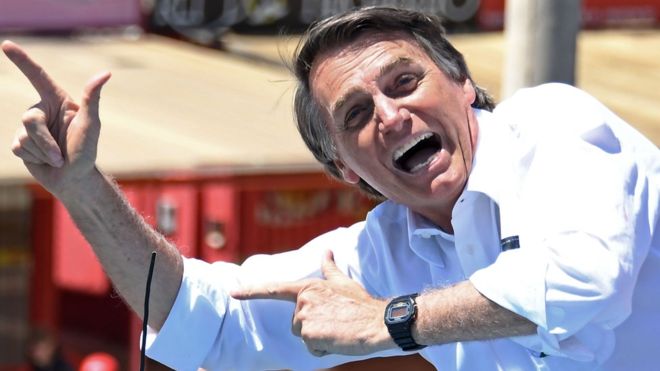 Several million women in Brazil have declared an online war against the front-running presidential candidate, the far-right Jair Bolsonaro, ahead of the first round of elections due to take place on 7 October.

Mr Bolsonaro, who is currently recovering in hospital after being stabbed during a political rally on 6 September, is known for making offensive, off-the-cuff remarks about women, black people and sexual minorities.

Since his stabbing – by an apparently mentally ill man opposed to his political views – he has risen to 28% in opinion polls and is seen as the most likely candidate to dispute a run-off on 28 October.

Hailing from the relatively small, conservative Social Liberal Party, Mr Bolsonaro is one of Brazil’s most influential politicians online, with more than 10.5m followers on Twitter, Facebook and Instagram combined.

But in the past week, various female celebrities have joined an effort to counteract his rise in the polls, taking to their social media accounts to post using the hashtag #EleNao (#NotHim). 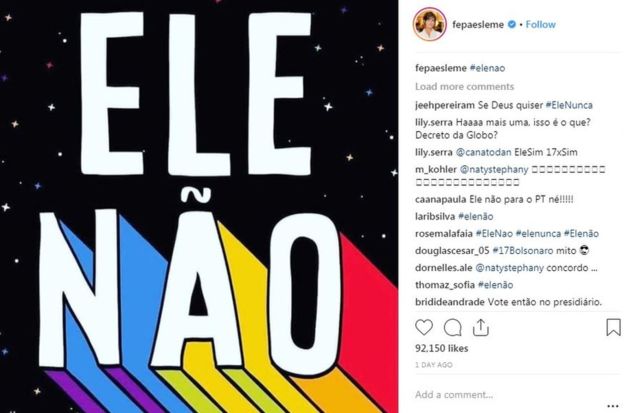 The tag had been mentioned nearly 200,000 times in total on Instagram alone by Thursday morning.

On Twitter, #EleNao had more than 193,000 mentions between Friday, 14 September and Sunday, according to monitoring by researchers at FGV university. Additionally, there were 152k tweets with the hashtag #EleNunca (#NeverHim).

The list of women posting against the far-right candidate includes prominent actresses, journalists and TV presenters.

“#EleNao is not just about politics. It is about morals,” actress Deborah Secco tweeted to her 3.4m followers. 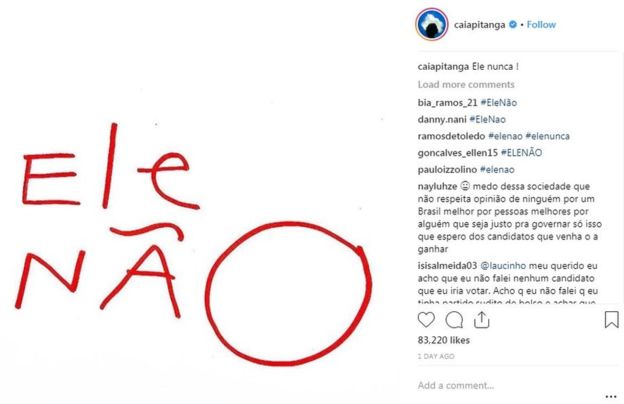 Sasha Meneghel, the daughter of one of Brazil’s most iconic children’s TV presenters – Xuxa Meneghel – shared a post on Instagram Stories calling on her 5m followers to help “change the minds of undecided” voters.

“Opting for Bolsonaro is a dangerous retrogression,” she says.

Mr Bolsonaro, a 27-year veteran in the Brazilian Congress, is rejected by 49% of female voters, but supported by 17%, according to a Datafolha poll released on 10 September.

BBC News Brasil reached out to the candidate’s party for their views about the online campaign against Bolsonaro, but it declined to comment.

The controversial politician is appealing against a fine handed to him for telling Congresswoman Maria do Rosario, from the left-wing Workers Party: “I wouldn’t rape you because you don’t deserve it.”

Bolsonaro has also made a string of remarks that were seen to justify the gender pay gap and sexism. 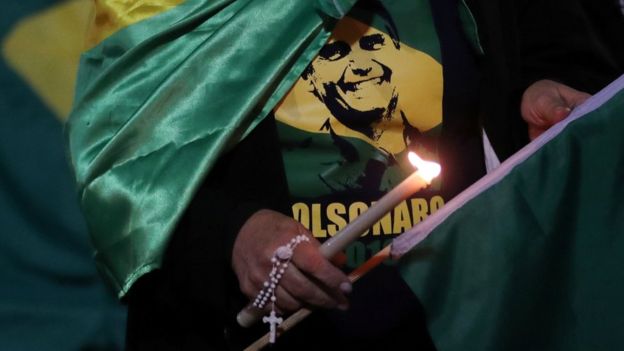 In 2016, he said during an interview with TV presenter Luciana Gimenez that he wouldn’t employ a woman “with the same salary as a man” because women get pregnant.

He has subsequently insisted that he was misinterpreted and that he was only voicing the rationale of employers.

“[The law] already guarantees equal pay for men and women. If the law is not being observed, it is up to the courts to resolve [disputes],” he said in an interview with TV Globo last month.

Mr Bolsonaro also caused uproar while talking about his own daughter during a public event in April 2017. “I have five children. I had four boys, and in the fifth, I weakened and a girl came,” he said at the time.

But his female supporters dismiss these controversies and focus on Mr Bolsonaro’s other proposals.

A former army captain, he is running on a platform of liberalising gun laws, and repressive tactics against urban criminality and drug trafficking. 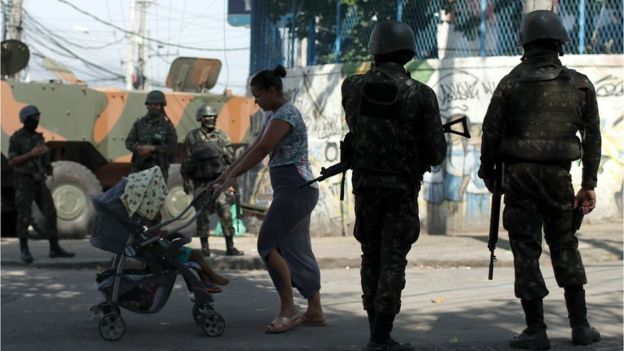 He also advocates rolling back affirmative action for black Brazilians, and reversing legislation which increases sentences for murdering women because of their gender (femicide).

He has said the “mistake” of Brazil’s military dictatorship (1964-1985) was “to torture, not kill” left-wing activists and promised to stop funding human rights organisations “because human rights are a disservice to Brazil”.

Some of his opinions have landed him court cases. He was accused of racism after remarks he made about descendants of African slaves in 2017. Last week, the Supreme Court cleared him of these charges. 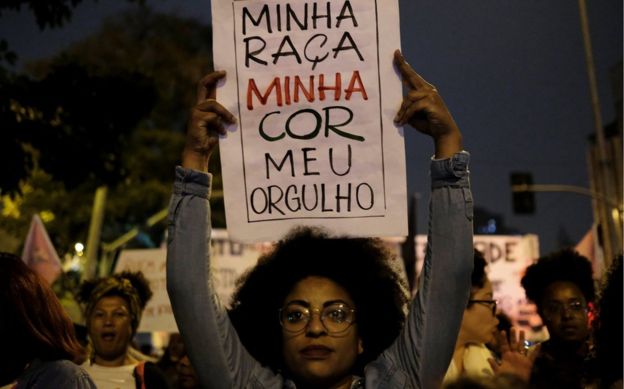 He was also fined for saying in a TV programme in 2011: “It never crossed my mind that I would have gay children, because they had a good education.”

Despite saying in the past that homosexuality was caused by “lack of beating”, he says he is not a homophobe and has many gay supporters.

Why women would vote for Bolsonaro

A Twitter search using the hashtag #mulherescombolsonaro (#womenwithbolsonaro) brings up a post listing “five reasons to vote for” him.

It highlights Mr Bolsonaro’s image as a “clean politician”, and one who is not associated with corruption.

It also refers to his position in favour of tax cuts, liberalising gun laws and lowering the age from which people can go to jail (currently 18 years of age). 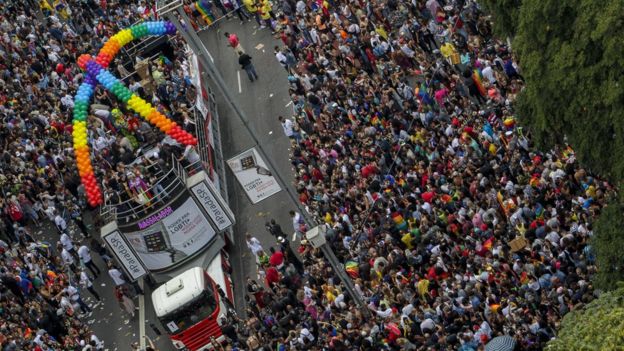 It praises his bitter opposition to a proposal of teaching school children about sexual minorities and fighting homophobia (pejoratively nicknamed ‘gay kit’ by its detractors).

“Brazil above everything, God above all,” says the post.

In Brazil’s bitterly polarised election, Mr Bolsonaro’s supporters’ readiness to defend him and attack his critics has landed them with the pejorative nickname “bolsominions”.

They, on the other hand, refer to their candidate as “Bolsomito” – a combination of the words Bolsonaro and “mito” (the legend). Many women who support him refer to themselves as “bolsomitas”.

Last week in this ‘online war’, a closed Facebook group for women against the candidate, which had grown to more than 2m followers since its creation on 30 August, was hacked.

Its name, “Women United Against Bolsonaro”, was changed to “Women With Bolsonaro” – prompting the candidate to thank the group on his Twitter account, apparently mistaking the hacked page for a genuine one.

The page has since been restored to its rightful administrators.

Meanwhile, another closed Facebook page called “Women With Bolsonaro (Official)” reached 850,000 followers on Thursday. They describe themselves as “women of courage who don’t need feminism and support Captain Bolsonaro for president”.

Mr Bolsonaro remains in intensive care but is responding well to treatment and his progress is considered “satisfactory” by his doctors, according to a medical bulletin released on Tuesday.

The stabbing means he will remain out of action for the time being – but his popularity and ability to stir debate online mean the controversial frontrunner is unlikely to stay out of voters’ minds for too long.

share on Facebookshare on Twitter
Mexico’s president-elect grounded on commercial plane for hours
25 Years After Escobar’s Death, Medellín Struggles to Demolish a Legend