HomeNews¿Is There Any Point to Protesting?
News

¿Is There Any Point to Protesting? 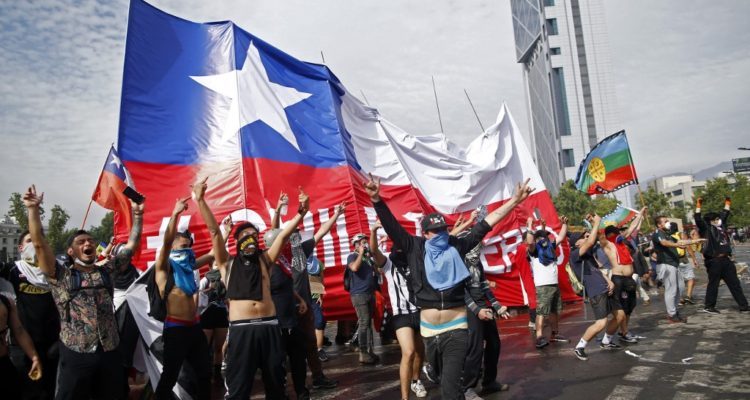 Demonstrators hold a big Chilean flag in Santiago on the sixth straight day of street violence which erupted over a now suspended hike in metro ticket prices, on October 23, 2019. - A four-year-old child was killed during the latest round of protests against economic inequality in Chile, raising the death toll from five days of social unrest to 18 as unions launched a general strike on Wednesday. (Photo by Pablo VERA / AFP)

That winter of 2003—you remember it, and so do I—the world assembled, arms linked, to protest the prospect of war in Iraq. What times those were, and how the passions swelled. The fervor of the public reached a peak on February 15th, when millions of people in more than sixty countries claimed the streets, voicing their opposition. “listen to us,” a sign in London read. In New York, demonstrators stormed the avenues with a huge inflatable globe. Young and old turned out, and citizens and foreigners. A few weeks later, the United States was at war.

Whatever. Less than a decade later, in New York, Occupy Wall Street arose to attack the misdeeds of the finance industry, the stranglehold of corporate power, and the predations of inequality. For two months, in the autumn of 2011, demonstrators camped, collaborated, and convened in Zuccotti Park, in lower Manhattan. By the time they were evicted, Occupy had spread to more than nine hundred cities worldwide. No U.S. policies had changed.

Soon enough, it was 2014. A movement known as Black Lives Matter marshalled demonstrations in Missouri and across the nation, using not just signs but hashtags to help spread the word. The highest-profile B.L.M. protests received front-page coverage in every major paper in the country. Demonstrators protested, by name, the killings of more than forty unarmed black people by law-enforcement officers. A majority of these officers were not indicted, however; of those that were, three were found guilty. To date, only one of the convicted has received a prison sentence.

Oh, but do you recall that Saturday this past January? Throughout the nation and in nearly seven hundred cities all across the world, millions of people assembled for the Women’s March, chanting both for female empowerment and against the just inaugurated President. The hats were great. The signs were better. The boulevards in cities including New York, Washington, London—even L.A., where humans rarely walk—were riverine with marchers. It was said to be the largest single-day demonstration in the history of the United States. Then Monday came, and the new Administration went about its work as planned.

For centuries, on the right and the left alike, it has been an article of faith that, in moments of sharp civic discontent, you and I and everyone we know can take to the streets, demanding change. The First Amendment enshrines such efforts, protecting “the right of the people peaceably to assemble, and to petition the Government for a redress of grievances.” From the Stamp Act boycotts of the seventeen-sixties to the 1913 suffrage parade and the March on Washington, in 1963, protesters have pushed proudly through our history. Along the way, they have given us great—well, playable—songs. (Tom Lehrer: “The reason most folk songs are so atrocious is that they were written by the People.”) Abroad, activism drove the Arab Spring and labor movements in Macau, while outrages shared across continents triggered such events as the feminism-and-rationalism-flaunting event known as Boobquake. So strident was Boobquake that it elicited a counter-campaign, called Brainquake. All this expressiveness, we think, is good.

Still, what has protest done for us lately? Smartphones and social media are supposed to have made organizing easier, and activists today speak more about numbers and reach than about lasting results. Is protest a productive use of our political attention? Or is it just a bit of social theatre we perform to make ourselves feel virtuous, useful, and in the right?

In “Inventing the Future: Postcapitalism and a World Without Work” (Verso), a book published in 2015, then updated and reissued this past year for reasons likely to be clear to anyone who has opened a newspaper, Nick Srnicek and Alex Williams question the power of marches, protests, and other acts of what they call “folk politics.” These methods, they say, are more habit than solution. Protest is too fleeting. It ignores the structural nature of problems in a modern world. “The folk-political injunction is to reduce complexity down to a human scale,” they write. This impulse promotes authenticity-mongering, reasoning through individual stories (also a journalistic tic), and a general inability to think systemically about change. In the immediate sense, a movement such as Occupy wilted because police in riot gear chased protesters out of their spaces. But, really, the authors insist, its methods sank it from the start by channelling the righteous sentiments of those involved over the mechanisms of real progress.

“This is politics transmitted into pastime—politics-as-drug-experience, perhaps—rather than anything capable of transforming society,” Srnicek and Williams write. “If we look at the protests today as an exercise in public awareness, they appear to have had mixed success at best. Their messages are mangled by an unsympathetic media smitten by images of property destruction—assuming that the media even acknowledges a form of contention that has become increasingly repetitive and boring.”

Boring? Ouch. The criticism stings because Srnicek and Williams aren’t wing nuts of the right, or stodgy suits, or even quailing centrists. They are Marx-infused leftists who aspire to a “post-work,” open-bordered world. They believe that society can change—must change—in order to phase out capitalism as a system. Their objection to protest and direct action defies generations of radical zeal. “The people, united, will never be defeated!” the old street chant goes. These lefties say that, actually, they will.

The difficulty, in their eyes, is that the left, despite its pride in being progressive, is mired in nostalgia. “Petitions, occupations, strikes, vanguard parties, affinity groups, trade unions: all arose out of particular historical conditions,” they say. They think that modernizing these things for an internationalized, digitized world will free us from what they vividly call our “endless treadmill of misery.” Protest is fine for digging in your heels. But work for change needs to be pragmatic and up-to-date. “Inventing the Future” may be the shrewdest, sanest pipe dream of a book published since the recession.

In their smokier moments, Srnicek and Williams encourage “postcapitalist” change across society, often through drastic means. They aspire to shorten the workweek, introduce a generous and global basic income, and release people from the mind-set that makes such things seem lazy and weird. They look forward to the ever-nearing day when robots take our jobs. (The more work we toss to C-3PO, they explain, the easier it will be to escape the capitalist churn of laboring for our keep.) Mostly, they’re self-aware enough to concede that these ideas border on the utopian. Yet their portrait of a mindless, knee-jerk activist left “predicated upon critiques of bureaucracy, verticality, exclusion and institutionalisation” seems grounded and real. Can protest be made great again? Or are the people simply raising their fists to the skies?

n odd and revealing feature of American culture over the past half century is that its protest trends and its workplace ideals mirror each other. Just as businesses have sought to escape the old corporate strictures by encouraging flexible and off-site work and by flattening hierarchies (sometimes even eliminating managers), protesters have tried to move past the groaning actions of the past by coördinating instantly across distance and embracing leaderless or “horizontal” movements. This is usually easier said than done; the hardest aspect of working without leaders tends to be working at all. A nagging question is how to get the people going when there’s no Gandhi to lead the charge.

This challenge lies at the core of “Assembly” (Oxford), by Michael Hardt and Antonio Negri, two political philosophers who try to figure out how movements can be led well without leaders. “Gone are the days, on the one hand, when a political vanguard could successfully take power in the name of the masses,” they write. “On the other, it is a terrible mistake to translate valid critiques of leadership into a refusal of sustained political organization and institution.” Hardt and Negri also work in the Marxist tradition, and their book is light on details from society and extremely heavy on abstract forces. Sometimes, they seem to be describing less the art of the possible than the fluid mechanics of a gas. (“As capitalists, under the rule of finance, lose their innovative capacities and are gradually excluded from the knowledge of productive socialization, the multitude increasingly generates its own forms of cooperation and gains capacities for innovation . . .”) Their scheme is apt to be of greater interest to a fellow with a lot of whiteboard markers than to somebody with a handmade poster in the street.