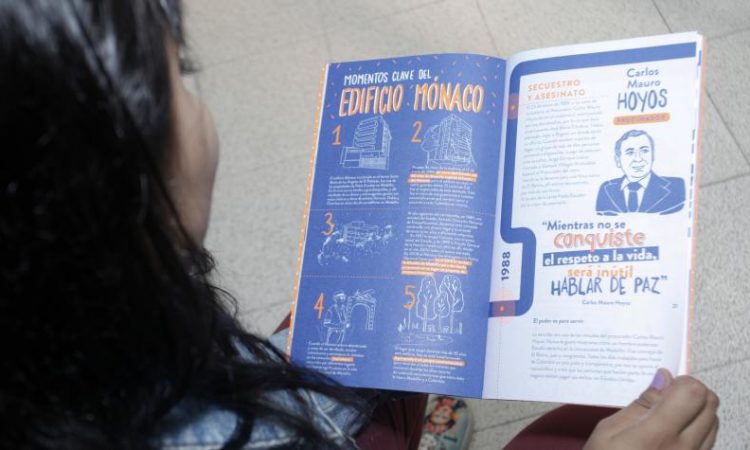 In the educational institutions of Medellín, students can learn about the most violent history of the city, on behalf of drug trafficking, and also of the characters who fought for a better society and lost their lives amid the horror that lasted several years. But this learning has a deeper purpose: to make children and adolescents understand the importance of never repeating that blood past and working for a true social and cultural transformation.

The initiative provides pedagogical material and guides to teachers, from whom a great commitment is expected to bring this theme to the classroom, and is part of the ‘Medellín embraza su historia’ strategy, which has other activities and was launched on the same day as The Monaco building, which was the residence of Pablo Escobar, was demolished.

The program that will be developed in educational institutions is called ‘In my school, Medellín embraces its history’, which seeks to involve students in the construction of memory, through activities such as videos, practical and theoretical exercises, testimonies, between others “The idea is that students in our city and eventually in our country know the pain and social complexities involved in a phenomenon like drug trafficking and the violence associated with it, which we still suffer,” said the mayor of Medellin, Federico Gutiérrez .

The strategy seeks not to throw history into oblivion, not to disappear from the collective memory the 46,612 murders that occurred in Medellín between 1983 and 1994 or the names of the people who fell in the midst of the horror of the time. For this reason, the pedagogical and didactic material includes the stories of characters such as the former Minister of Justice, Rodrigo Lara Bonilla, the journalist Guillermo Cano, the colonel Valdemar Franklin or the presidential candidate Luis Carlos Galán, among others.

The idea is that students in our city and eventually in our country know the pain and social complexities involved in a phenomenon such as drug trafficking Also, painful episodes are remembered as the bombs that exploded in different places and ended the lives of hundreds of innocents. But also, the moments, efforts and people that made the city reborn and began to change this past of violence are counted, with which it is sought that the new generations understand that it is possible to continue working to finish the inheritance that still remains of that time.