In 15 days they premiere Túnel de Oriente, in Medellín 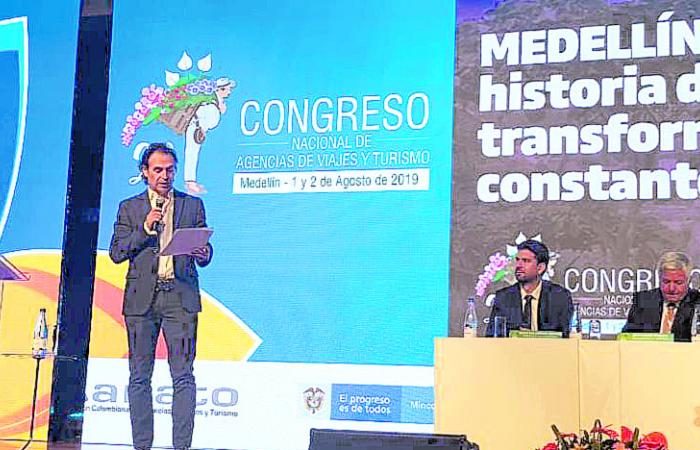 The mayor of Medellín, Federico Gutiérrez, confirmed yesterday that on August 15 the Tunnel of the East will be inaugurated, which “will allow Medellín to connect with Rionegro in a span of between 20 and 25 minutes”.

This was said during his presentation at the Congress of Anato, which began yesterday in the capital of Antioquia, and where he advocated that this city be consolidated as a main destination in Colombia. (Read: 62% of 4G roads record delays in their construction) He also highlighted the evolution of Medellín as a tourist destination in the country, exemplifying that during the Flower Fair, which begins today, a hotel occupation of around 85% is expected in the city.

“This city has to start receiving more international flights, that is one of the requests (to the Government),” he said. And this year, 890,000 visitors are expected in the city of ‘the eternal spring’. According to the official, they project that by 2021 the figure of one million travelers will be exceeded, while by 2024 they expect to receive about 1.4 million people.

In the event, which goes on until today, topics such as infrastructure, digitalization, job creation and tourism growth projections in the country were also discussed.

Paula Cortés Calle, president of Anato, said during the opening of the event that “this is a congress to understand digitalization and the relationship with the orange economy.”

Another of those present at the congress was Juan Carlos Salazar, director of the Civil Aeronautics, who delivered some projections. “The 2019 will close with a number well over 40 million passengers,” he said, while commenting that by 2030 the goal is to transport more than 100 million passengers in the country, for what will be needed “an infrastructure renewed. ”

In the first half of the year, 19 million passengers were registered in the country, which means a growth of 9.7% compared to the first six months of 2018.

Of that total, 7 million correspond to international travelers. The session also featured Luis Pérez Gutiérrez, governor of Antioquia, who mainly covered infrastructure and project issues to boost tourism and commerce in that department. In that sense, one of the most outstanding things he mentioned is that Urabá is ready to operate the Puerto Antioquia project, which will change the country’s economy.

“It is the new economic conquest project that Antioquia is going to do,” Pérez said, adding that Bogotá, Risaralda, Quindío and Caldas would be closer to Puerto Antioquia than to the Caribbean coast, which would give rise, according to him, to ensure the Project success.

He even said that “the coffee growers gave us a letter saying that they would take out the coffee they normally take along the coast through Puerto Antioquia.

” Better prospects In terms of tourism, the governor said that $ 65,000 million have been invested “to recover the beaches of Urabá”, since “there is a potential that Antioquia has ignored over the sea given the greater investments in the mountains.” Among the challenges of the sector, according to the president of Anato, are the incorporation of “exclusive tourist plates for the use of the sector that do not have a peak and plate limitation”, and “stimulate already recognized companies and help them with the systematization of its services and internationalization processes ”, among other topics.

The executive called attention and said that the sector “went hand in hand to obtain the National Tourism Registry”, warning that controls must be increased and digitized. In line with the above, the Vice Minister of Tourism, Julian Guerrero, said that the incorporation of technology and formalization are fundamental issues for tourism.

share on Facebookshare on Twitter
Medellín Center: designed for pedestrians and culture
Don’t miss them: Medellín is a bird territory