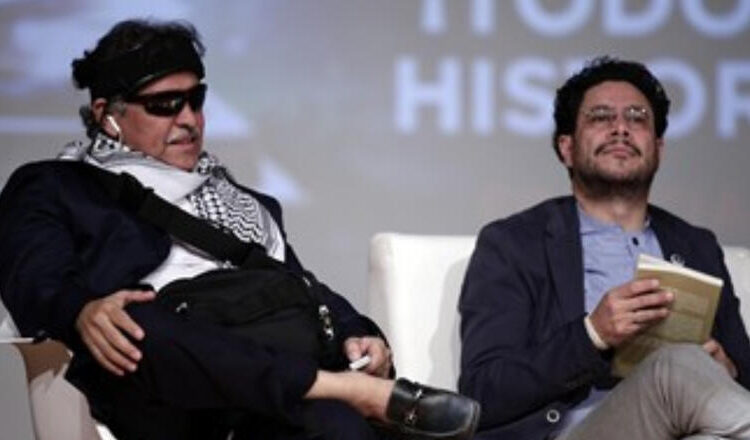 Senator Ivan Cepeda, the mastermind behind the sham “case” against former President Alvaro Uribe, is the FARC’s main political ally in Colombia, and he is proud of his support for the Marxists insurgents who terrorized Colombia for the last half century.

When senior FARC commander Jesus Santrich was first indicted by a U.S. federal grand jury in the Southern District of New York (SDNY) in April 2018 for conspiracy to produce and transport thousands of tons of cocaine from Colombia to the United States, Cepeda launched an all-out campaign to block his extradition.  In doing so, Cepeda voiced his contempt for the U.S. grand jury system, maligning the integrity of the ordinary American citizens who carried out this duty.

The unsealed U.S. indictment documents indicated that Jesus Santrich was recorded describing a network of clandestine Colombian laboratories that could produce and supply thousands of tons of cocaine, and a U.S.-flagged aircraft he would use to illegally transport the drugs to the United States.  This was the evidence shared with the average American citizens empaneled in the grand jury who returned the indictment.

Upon Santrich’s arrest by Colombian authorities on the day he was indicted in New York, Cepeda immediately called for his release and penned a letter asking him to “never give up”. He then launched an attack on the evidence which directly linked Santrich to dealings with Mexican drug cartels, accusing the U.S. grand jury members of an “entrapment” as part of a vast conspiracy to derail the 2016 Colombian peace deal with his allies in the FARC.

Cepeda expanded on his conspiracy theory in a debate before the Colombian Congress, where he argued that the U.S. investigators who obtained the material evidence incriminating Santrich had “been practicing covert operations” and had acted illegally.  (This is ironic given Cepeda’s militant defense of a falsified wiretap warrant used as part of his sham case against Uribe.)

In the peace deal the FARC and Cepeda championed, a number of judicial loopholes sprung up to give special privileges to senior FARC commanders.  Cepeda’s relentless campaign to protect Santrich zeroed in on exploiting those loopholes that he, Santrich and their comrades had fought hard to include in the deal.

Every case that Cepeda has ever pressed in Colombian courts has been politically motivated.  Protecting Santrich was no exception.  Using the peace deal as a shield Cepeda accused the United States of violating Colombia’s sovereignty to entrap Santrich, and derail Colombia’s peace.  To succeed, Cepeda had to weave an enormous conspiracy theory, involving the U.S. Drug Enforcement Agency, the U.S. government, the U.S. Attorney in New York, and the average Americans who sat on the grand jury and heard the evidence themselves.

Since Santrich is a FARC commander, Cepeda first ran to the Special Jurisdiction for Peace (JEP), the tribunal created by the 2016 peace accord, to demand “no extradition” privileges for his comrade. The peace deal protects guerilla fighters from being extradited unless the alleged crimes were committed after the deal went into effect.  Of course, the indictment was for crimes committed in 2017 onward, well after the peace deal.  Such privileges have been the source of intense public opposition to the terms of the peace deal among the Colombian public, and anger with the JEP’s bias towards impunity.  But Cepeda was undaunted.  He spouted his conspiracy theories and badgered the JEP until they agreed to free Santrich, and the Supreme Court of Justice would soon follow.

After a year of campaigning, Cepeda succeeded in getting Santrich out of jail.  On May 30, 2019, Cepeda himself escorted the FARC leader from detention in triumph and proudly tweeted his “solidarity” with the man indicted for serious criminal activities aimed at torpedoing the rule of law and mocking the 2016 peace deal.

The next challenge for Cepeda and Santrich was to fight extradition at all costs.  They each had a plan to achieve this goal.

It would end in treachery against the Colombian people and U.S. justice.