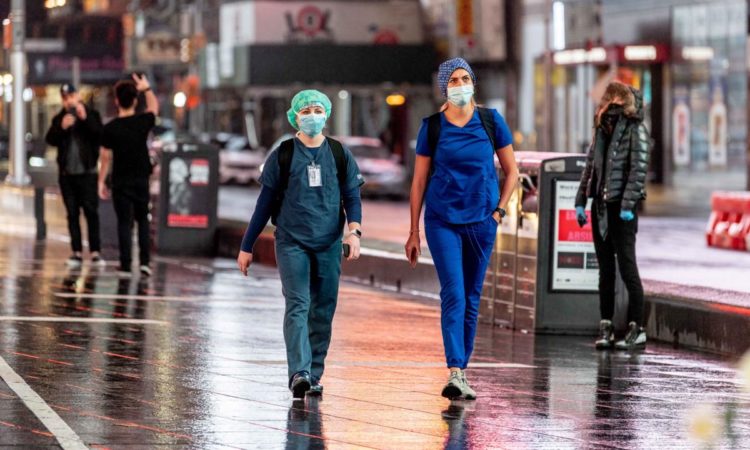 NEW YORK, NEW YORK - APRIL 26: Medical workers wear masks in Times Square during the the COVID-19 shutdown on April 26, 2020 in New York City. COVID-19 has spread to most countries around the world, claiming over 203,000 lives lost with over 2.9 million infections reported. (Photo by Roy Rochlin/Getty Images)

Clear blue skies over the world’s megacities have become a visible mark of the pandemic. It’s a welcome change for many, not least because outdoor air pollution kills around 4.2 million people worldwide each year.

But when it comes to Covid-19, these risks to respiratory health are not the sum of their parts; researchers in the US are building a case that suggests air pollution has significantly worsened the Covid-19 outbreak and led to more deaths than if pollution-free skies were the norm. As well as predisposing the people who have lived with polluted air for decades, scientists have also suggested that air pollution particles may be acting as vehicles for viral transmission.

These new findings could have a significant impact on how governments choose to ease lockdowns in the coming months, as scientists say that improving air quality could play an important role in overcoming the pandemic.

One recent study found that even small increases in fine particulate matter, known as PM2.5, have had an outsized effect in the US. An increase of just 1 microgram per cubic metre corresponded to a 15% increase in Covid-19 deaths, according to the researchers, led by Xiao Wu and Rachel Nethery at the at the Harvard University T.H. Chan School of Public Health.

The evidence we have is pretty clear that people who have been living in places that are more polluted over time, that they are more likely to die from coronavirus – Aaron Bernstein

For comparison, the safe limit designated by the US’s Environmental Protection Agency is 12 micrograms PM2.5 per cubic metre, while the World Health Organization has a guideline figure of 10 micrograms per cubic metre as an annual mean. Parts of New York have annual PM2.5 levels consistently above this safe threshold. Researchers suggest that this could have played a part in the scale of New York State’s coronavirus outbreak, with deaths as of April by far the highest of any state.

“The evidence we have is pretty clear that people who have been living in places that are more polluted over time, that they are more likely to die from coronavirus,” says Aaron Bernstein, the director of the Center for Climate, Health, and Global Environment at Harvard University.

In the study, which looked at 3,080 counties in the US, people who had lived in counties with long-term pollution exposure for 15-20 years had significantly higher mortality rates, says Wu.

While the study has yet to be peer-reviewed by independent experts, Wu says that the association is likely down to the higher risk of existing respiratory and heart diseases in areas of higher pollution. Air pollution is also known to weaken the immune system, compromising people’s ability to fight off infection, according to the European Public Health Alliance.

“If Manhattan had lowered its average particulate matter level by just a single unit, or one microgram per cubic meter, over the past 20 years, the borough would most likely have seen 248 fewer Covid-19 deaths by this point in the outbreak [4 April 2020],” the researchers conclude.

A study of air quality in Italy’s northern provinces of Lombardy and Emilia Romagna also found a correlation between Covid-19 mortality rates and high levels of pollution. Lombardy makes up the vast majority of the country’s deaths, at 13,325 of Italy’s 26,644 as of 26 April, while Emilia Romagna was the province with the next greatest death toll, at 3,386. The researchers questioned the role of low air quality in their becoming hotspots, concluding that: “the high level of pollution in northern Italy should be considered an additional co-factor of the high level of lethality recorded in that area”.

These are not the first studies to highlight a substantial link between air pollution levels and deaths from viral diseases. A 2003 study found that patients with Sars, a respiratory virus closely related to Covid-19, were 84% more likely to die if they lived in areas with high levels of pollution.

share on Facebookshare on Twitter
Lakers got money from loan program, returned it
One Trump Donor’s Hotel Companies Got $96.1 Million Meant for Small Businesses