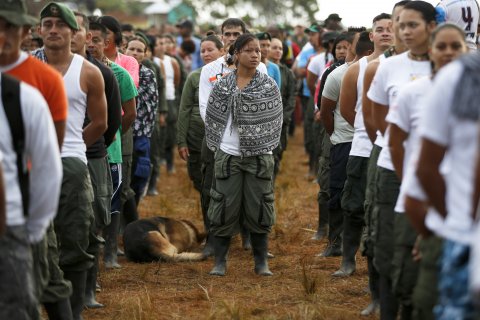 Has Colombia’s FARC really left the country’s criminal scene? Yes, and absolutely not. The rebel army is gone, and has become a political party. But the FARC Mafia is just coming into being.

In November 2016, a peace deal with the Revolutionary Armed Forces of Colombia (Fuerzas Armadas Revolucionarias de Colombia – FARC) was signed. By March 2017, about 7,000 rebels were gathered in 26 specially designated zones across the country. Added to this number were released prisoners and militiamen. A census of the FARC registered just over 10,000 guerrillas as part of the agreement.

In August 2017, the official disarmament of the rebel army was completed, with almost 9,000 arms handed over. In September, the new political party, the Revolutionary Alternative Common Force (Fuerza Alternativa Revolucionaria del Común – FARC) was formed.

So the FARC, the nationwide insurgent army, is gone and is now a legally constituted political party with a guaranteed 10 seats in the Colombian congress, as agreed under the peace deal.

Even before the agreement was signed, however, the FARC’s 1st Front pronounced itself dissident. This rebel unit has acted as a lightning rod for guerrilla elements on the eastern plains that were never interested in peace, entered the process and became disillusioned, or simply wanted to return to what they knew. The disillusioned are growing in number as implementation of the peace agreement limps along, feeding alarming levels of desertion from the concentration zones, with former fighters going back to their old stomping grounds and old habits.

Last year, InSight Crime spent more than a month in the departments of Guaviare and Meta, where the 1st Front and its allies are based. Here the flat plains transform into Amazonian jungle and rivers take over from roads as the main transport arteries.

We estimate that this dissident faction, which encompasses elements of 10 different fronts, calling itself the “Eastern Bloc” (Bloque Oriental) after the FARC’s most powerful fighting division, now has at least 600 fighters and an equal number of militia or collaborators. The government and security forces do not refer to them as rebels, but rather as “residual groups,” thus depriving them of any political status. In addition, there are other FARC elements known to still be active in criminal economies, as seen in the map below.

While to the untrained eye the dissidents look exactly like their predecessors, there are subtle differences. A local human rights ombudsman in San José de Guaviare, Herlein Andrés Pacheco, described them as being “much more economic than political in character,” and said that they were more interested in establishing control over illegal economies, principally the drug trade and extortion, than engaging in political work with the local communities.

When one looks at the dissident expansion from Guaviare, it is clear that it has been determined with drug trafficking in mind.  The first dissident columns were sent along the Guaviare, Inírida and Vaupés rivers, the principal drug trafficking corridors into Venezuela and Brazil. Field research has proven that the dissidents charge “taxes” on all traffic, legal and illegal, moving along these waterways and that this has become their primary source of income.

While there have been bombs set off and some attacks on the security forces by the dissidents, the majority of these can be traced back to enforcing extortion payment and intimidation rather than insurgent action.  The dissidents also prefer to operate in civilian clothing.

Police sources in San José de Guaviare stated that there was a change in the command structure.  While under the FARC the command structure was clear, from the ruling body known as the Secretariat, down to commanders of blocs and fronts, the dissidents now operate more as a federation. While Miguel Botache Santanilla, alias “Gentil Duarte,” is the most senior dissident commander, he is not the overall commander. Néstor Gregorio Verá Fernández, alias “Iván Mordisco,” the 1st Front commander and the earliest dissident leader has more fighters under his command and much more money. Security forces communications intercepts reveal that the different dissident commanders are in touch, but work together in the interests of business rather than as a coherent insurgent force.

Since the foundation of the FARC’s Boliviarian Movement in 2000, both military and rebel sources have always insisted that for every uniformed rebel or “guerrillero raso” there were at least three militiamen, divided into three different types. The “Popular Militia” were the logistics and intelligence support networks, often also involved in the illegal economies; the Bolivarian militia, which received military training and acted as a reserve force living at home with their families, but carrying out armed attacks; and finally the Clandestine Colombian Communist Party (Partido Comunista Clandestino Colombiano – PC3) whose mission it was to penetrate organs of the state and carry out political work.

Therefore, by even the most conservative estimates if 6,900 guerrillero rasos demobilized, then there should have been more than 20,000 militia members. But just under 3,000 militia declared themselves. The rest remain where they have always been; hidden among the civilian population in FARC areas of influence.

When the right-wing army of the United Self-Defense Forces of Colombia (Autodefensas Unidas de Colombia – AUC) demobilized in 2006, there was widespread conflict across the country between its successor groups known as criminal bands, or “bandas criminales” (BACRIM).  Yet there has been little fighting between former FARC rebels. Indeed, most of the conflict we have seen since the FARC demobilized has happened in areas where this rebel group cohabited with other illegal actors like the National Liberation Army (Ejército de Liberación Nacional – ELN) or the Urabeños drug trafficking organization. The Pacific Coast is the best example of this.

In areas where the FARC held undisputed sway and where there are no open dissident elements present, there has been little change to the drug trade. Coca crops are still being grown, laboratories operate and shipments travel along internal movement corridors to departure points along the borders or coastlines.  The fact that this trade continues uninterrupted suggests it is because the same people are running it: former FARC elements. Elements that have been hardened by decades of security force offensives and learned to live undetected by law enforcement. Elements who have helped gather, hide and manage hundreds of millions of dollars.

While we are playing with numbers it might also be worth speculating about weapons. The FARC handed in 8,994 weapons. When one considers that 10,000 AK-47s were parachuted into the jungle in just one arms shipment in 1999, it is likely that FARC elements still have access to thousands of assault rifles and pistols.

The FARC was formed in 1964, and so by the time of the demobilization in 2017 the rebels had been fighting for 53 years. The average age of the guerrillas we saw in the six concentration zones we visited over 2017 was well under 30. So where are all the older rebels?

In 2016 during a visit to Planadas in Tolima, the municipality where the hamlet of Marquetalia and the birthplace of the FARC sits, we spoke with “retired” rebels who spoke of FARC clans that had contributed several generations of fighters to the movement, families who dominated certain fronts. These clans, many of which controlled the running of the criminal economies that sustained the FARC for five decades, remain in place. In traditional FARC areas of influence the rebels have been the principal employers of local communities for generations. This was clear in Miraflores, where the 1st Front has its headquarters.

“Everyone here has at least one family member who has been in the FARC,” said Mayor Andrés Flores, in charge of the police station in this besieged municipality in Guaviare.

The Future of the Drug Trade

If we want to take a glimpse into the future of the drug trade, we may want to take look at the story of the Popular Liberation Army (Ejército Popular de Liberación – EPL). A Maoist rebel group, it demobilized in 1991. By 2011, the drug trade was dominated by former EPL guerrillas.

There is a still a dissident faction of the EPL in the Catatumbo region of Norte de Santander department, which runs much of the cocaine going into Venezuela.  In 2011, the head of the Rastrojos drug trafficking organization, Javier Calle Serna, alias “Comba,” was a former EPL combatant, while the Urabeños leadership at that moment was wholly made up of former EPL fighters. The current leader of the Urabeños, Dario Antonio Úsuga, alias “Otoniel,” is a former EPL guerrilla.

We believe that well within 20 years from today the drug trade will be dominated by a mafia run by former members of the FARC.