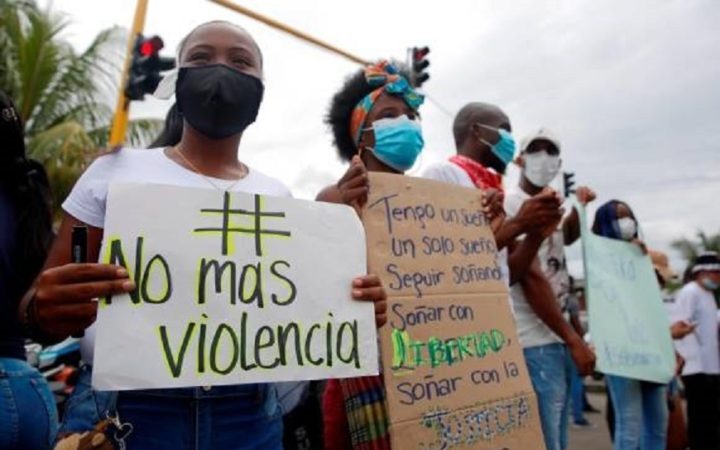 In the month following Colombian President Gustavo Petro’s August inauguration, the leaders of two rival gangs in the port city of Buenaventura were meeting to discuss the prospect of peace.

On the streets, a war was being waged. Clashes between the two gangs, the Shottas and the Espartanos, often left dozens dead each month. Hapless civilians got caught in the crossfire. Families holed up in their homes.

“It’s unfair that Buenaventura, having a people that is so peaceful, has so much violence, and that it’s us that are killing each other,” Geronimo, 37, a delegate of the Shottas who publicly uses a nom de guerre, said in an interview with Al Jazeera. “So our leader decided that this had to end.”

The gang’s rivals, the Espartanos, agreed.

What resulted from the secret gatherings was a truce that has reduced the number of gang-related homicides to zero over the past 100 days and provided relief to thousands who lived under constant fear. When the truce was made public on a livestreamed radio show in late September, the support was profuse.

“I see it, I hear it, and I still don’t believe it,” one commenter wrote on Facebook. “I’m tearing up at the possibility of a better Buenaventura. Glory be to God.”

The Shottas and the Espartanos were once one gang, called the Local, that dominated the city of Buenaventura. In 2020, its fracture over internal differences gave way to fighting.

But two years after the Shottas and the Espartanos declared war, the urban gangs are now standing at the front lines of an effort by President Petro to bring “total peace” to a country mired in violence.

In 2016, a peace deal between the Revolutionary Armed Forces of Colombia (FARC) and the Colombian government brought an end to nearly five decades of conflict across the country. But reforms promised in the deal — to attack the root causes of the violence — stalled.

A land redistribution plan to address rural inequality, as well as promises to offer greater access to hospitals and schools, failed to materialise under Petro’s predecessor, former President Ivan Duque, a vocal critic of the peace deal.

As a result, militias had multiplied in a race to control the illegal economies abandoned by the FARC. According to researchers, there are now between 50 and 60 criminal groups operating throughout the country, cashing in on drug trafficking, illegal gold mining and illicit logging. Violence has risen dramatically as groups fight each other and the army to secure their turf.

The “total peace” strategy is Petro’s answer to the rapid proliferation of armed groups. Under the plan, all of the so-called “high-impact” crime organisations are invited to sit down with the government and disarm.

Now, the Shottas and the Espartanos are in the exploratory phase of talks with the government. If successful, the negotiations could demobilise up to 2,000 gang members, mainly youth from tough backgrounds, and sweep hundreds of military-grade weapons off the streets.

“This has never been done before,” said Ruben Dario Jaramillo, a Catholic bishop and facilitator of the peace process in Buenaventura. “We’ve been trying to find cases of countries offering alternatives to criminal groups via dialogue and pacts. They don’t exist.”

While Colombia has previously negotiated with politically motivated rebels and paramilitary groups, this is the first time the government is seeking dialogues with gangs dedicated exclusively to organised crime. Questions abound over the rules to negotiate with such groups. As a legal framework is sorted out in congress, the government has pointed to Buenaventura as proof of the plan’s potential.

“Today, Buenaventura is an example of peace,” Vice President Francia Marquez declared in a December visit to the city, adding that leaders in other regions had shown interest in following in Buenaventura’s footsteps.

To Juan Manuel Torres, a researcher at the Peace and Reconciliation Foundation, the rapid drop in violence is evidence that previous efforts to stem the conflict through militarisation have failed.

There is only change, Torres said, “whenever two groups, for whatever reasons, decide to call it quits”.

In the weeks following the truce, the city has come to life again. Children play outside their homes without fear of being struck by a stray bullet. Youth venture into neighbourhoods previously cordoned off by invisible borders that were dangerous, if not deadly, to cross.

“The war had locked us up at home, like prisoners,” said Carlos Obando, a 22-year-old dance teacher who lives in Lleras, one of the most dangerous neighbourhoods in Buenaventura. “Now we can walk around in peace.”

Some activists, however, have pushed back on calling the truce a success just yet. Jorge Ocoro, a leader at the Puente Nayero Humanitarian Space, a protected community founded in 2014 to keep armed groups out of their neighbourhood, said that videos were circulating on WhatsApp of shootings that could potentially be attributed to the two gangs but were hard to pin on either group.

The extortion of local vendors and companies — which is a source of income for both gangs — has continued, said Johnny Viveros, a 39-year-old leader in the Puente Nayero Humanitarian Space.

“There have been changes, but it hasn’t been absolute,” said Viveros.

Even if the Shottas and the Espartanos maintain the peace between their two gangs, other groups threaten to bring violence to the city.

For decades, one or more armed groups have presided over Buenaventura, including the FARC and the United Self-Defense Forces of Colombia (AUC). Now, in the rural areas around Buenaventura, another four groups are battling for control of drug routes and seeking to expand into the city.

“We don’t gain anything by dismantling one group when there are other groups with whom nothing is being done,” said Bishop Jaramillo. “No one is going to lay down their weapons when they have an armed enemy around who can attack them.”

For peace to be long-lasting, experts, politicians and even the gangs themselves say that profound changes must be made to improve living conditions.

Though Buenaventura houses the busiest port in the country, moving 60 percent of Colombia’s international trade, the city struggles with extreme inequality. More than 80 percent of its population lives below the poverty line, with 40 percent living in abject poverty, according to official figures. Antigovernment protests in recent years have called for access to basic services such as health care and potable water.

To help address poverty, the Colombian government plans to employ 100,000 youth living in the country’s poorest regions as “peace facilitators” for a wage of a million Colombian pesos a month ($210). In Buenaventura, the mayor’s office hopes to boost employment by creating jobs in the fishing and tourism industries.

Geronimo, the delegate for the Shottas, is hopeful that Petro’s government can change the lives of hundreds of youth caught up in gangs.

“We want them to be able to study, to work, to be the type of men their parents once wanted them to be,” he said.