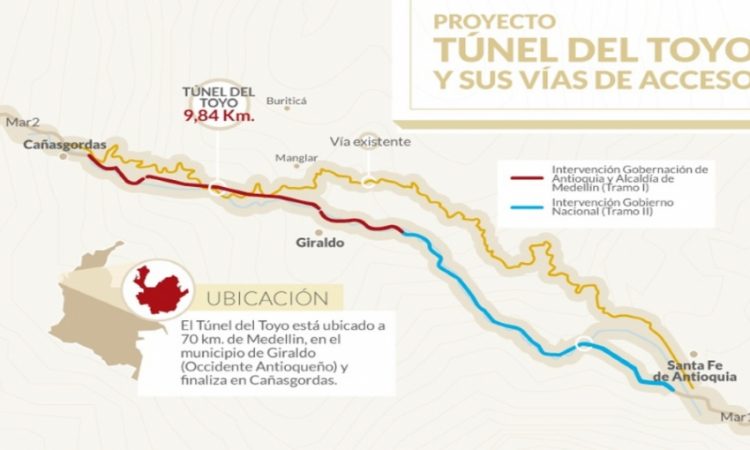 Colombia’s national government is about to unveil a new, COP$1.4 trillion (US$416 million) financing plan to ensure completion of the “phase two” section of highway connecting Santa Fe de Antioquia to the under-construction “Toyo” tunnel — both of which will link Medellin westward to new and existing Atlantic freight ports as part of the “Mar 1” and “Mar 2” highways.

Once completed, the “Mar 1” and “Mar 2” highways would drastically cut freight transit times between Medellin and the Atlantic, to around 4.5 hours.

“Phase one” of the 9.8-kilometers-long Toyo tunnel (see red line in map, above) — recently renamed “Tunel Guillermo Gaviria Echeverri,” honoring the father of former Antioquia Gov. Guillermo Gaviria Correa, murdered in 2002 by communist FARC terrorists following a peace march – is now due for opening in 2023, a year ahead of schedule, Gov. Anibal Gaviria revealed.

“The national government through Invias and ANI [the national infrastructure agency] has pledged to contribute the COP$1.4 trillion [US$416 million] necessary for the construction of ‘phase two’ of the Toyo Tunnel between Santa Fe de Antioquia and the eastern access to the Guillermo Gaviria Echeverri Tunnel,” Gaviria further explained.