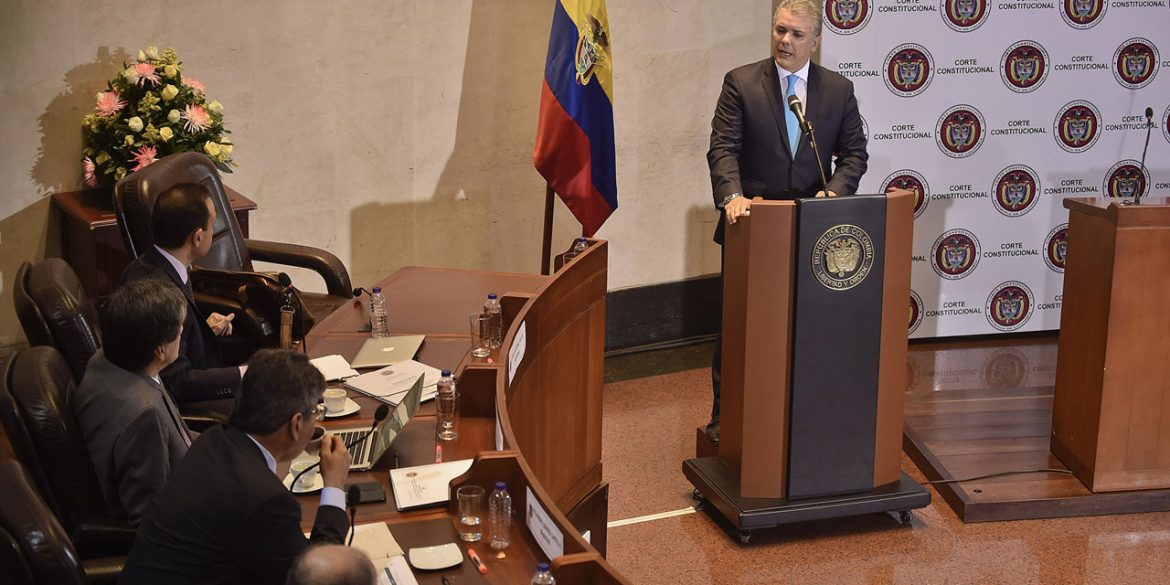 The practice was outlawed in 2015, after research by the World Health Organization and the International Agency for Research on Cancer concluded it probably caused cancer in humans.

Glysophate is one of the active ingredients in the controversial pesticide “Roundup” and is subject of debate in the constitutional court that called on officials and experts to testify on the use of the chemical produced by US agrochemical company Monsanto.

President Ivan Duque, along with other top politicians like the chief prosecutor called for the renewal of aerial spraying, despite opposition from scientists and civilians, and their inability to answer critical questions asked by the court.

“Between 2013 and August 1 of 2018, the country had the fastest growth in its history of illegal cultivation, it practically quintupled,” Duque said.

In 2017, Colombia reached 209,000 acres of coca farms and produced more cocaine than ever, according to the United Nations.

Duque painted the increase in coca cultivation as a threat to national security and argued that ceasing fumigation was a primary reason coca cultivation increased. He also pointed to the environmental damage caused by cocaine production and the correlation between the areas experiencing targeted assassinations of social leaders and the resurgence of coca cultivation.

While the effectiveness of the fumigation in reducing coca cultivation has been hotly debated, it has received unwavering support and funding from the United States.

Former President Juan Manuel Santos, an outstanding critic of a hard-line approach, spoke against the program. “It is not possible to establish a correlation between spraying and production. The top enemy of spraying is replanting. The farmers simply do not have an alternative but to replant.”

Santos claim is supported by the United Nations that has found that 80% of fumigated crops were replanted.

The government has often failed to meet obligations under a voluntary crop substitution program, which is supported by the international organization, but opposed by the US.

There is ample documentation of the negative effects spraying glysophate has had on rural communities even those who do not grow coca. In addition to a body of research linking glysophate with cancer, fumigators in Colombia often accidentally hit fields of legal crops, taking out farmers entire livelihood.

Health Minister Juan Pablo Uribe was ambiguous about glysophate, arguing that scientists have yet to find consensus about the possible negative effects of the chemical.

Representatives from affected regions came out against fumigation in the hearing. Camilo Romero, a leader from the long-neglected Nariño province in the southwest, came out against the proposal.

According to Romero, the government did not come up with a robust and holistic plan, they would need to dump 3.8 million liters in Narino alone- “We are not okay with that.”

Victor Luna, community representative of Novita in Choco, another area with a high concentration of coca and a long history of neglect, denounced what the serious health effects of glysophate exposure and the lack of social support for rural areas dependent on the illicit crop.

“We are not criminals, it is our heritage. Corruption does more harm to the country. In Novita, we do not have health, the hospital does not have sufficient resources to treat an emergency. We are a forgotten region.”