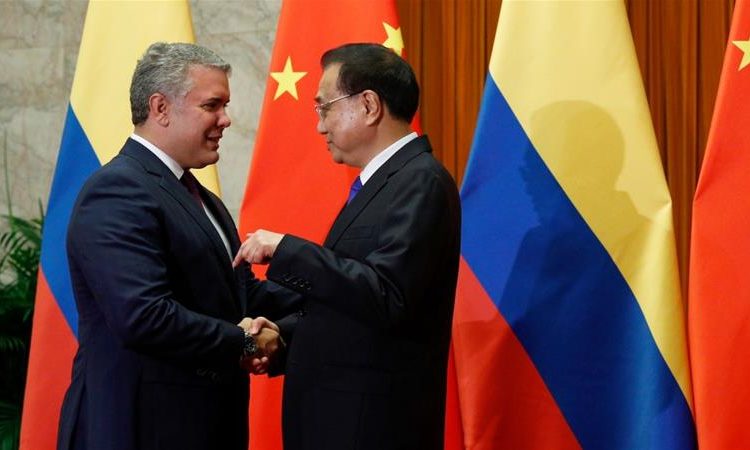 China’s interest in what the International Monetary Fund ranks as South America’s fastest-growing economy is deepening. Within the last three months, China’s Zijin Mining Group Co Ltd bought a gold mine in Colombia, and a consortium led by China Harbor Engineering Co won a contract to build the Bogota metro system.

Colombia’s President Ivan Duque made an official visit to Beijing in July 2019 to bolster Chinese demand for his country’s agricultural products and encourage continued Chinese investment in the Andean nation.

“[Duque] is the first Colombian president that has visited China during his first year as president. This means a lot because if you visit a country in your first year, it means that it is a priority for your government,” Juan Felipe Roldan, a lawyer who specialises in Chinese firms operating in Colombia, sa “We believe it is going to strengthen Colombian relationships a lot.”

“The buying of [the mining firm] Continental Gold by a Chinese company is a reflection of what is going on in the Colombia market right now regarding Chinese investors,” Roldan said. “Colombia is becoming more and more attractive.”

While the two countries appear to be growing closer, Colombia has not signed onto China’s Belt and Road Initiative (BRI). Since 2013, the multibillion-dollar initiative – designed to help the Asian giant partner with countries around the world through trade and various infrastructure projects – has drawn in 19 Latin American nations but not Colombia. And yet, that could change. Roldan says China’s recent large-scale projects in the South American country suggest Colombia my join the BRI.

In just four years, the presence of Chinese companies has quadrupled in Colombia, increasing from 20 to around 80 companies, according to documents provided to Al Jazeera by ProColombia.

The Economic & Commercial Counselor for the Chinese Embassy in Bogota Dong Wei told Al Jazeera that China is pleased more Chinese companies are investing in and operating in Colombia. “Colombia is strategically important in the region and is the only country in South America that connects the [Pacific and Atlantic] oceans and is politically and economically stable.”

This year will mark the 40th anniversary of diplomatic ties between China and Colombia. Economic relations between the two countries started picking in the late 1990s.

ProColombia data shows Chinese direct investment in Colombia went from almost nothing in 1994 to a height of $55.7m in 2016 and since then routinely hovers around $30m annually.

The International Federation for Human Rights (IFHR) conducted an investigation that points to a pattern of human and environmental rights violations committed by Chinese companies in Latin America. IFHR is a coalition of more than 20 human rights organisations. Its report, released in 2018, slammed Chinese firms for not complying with international standards and for a reported lack of accountability for human rights violations in countries where they operate, including Peru, Ecuador, Brazil, Argentina and Bolivia.

The report alleges Chinese companies operating in Latin America “failed to implement environmental consultation processes aimed at the general population, as set out in Principle 10 of the Rio Declaration on Environment and Development. Nor did they follow processes of free, prior, and informed consultation with indigenous groups meeting the standards established in Convention 169 of the ILO and in the UN Declaration on the Rights of Indigenous Peoples.”

“The Chinese government always demands and guides Chinese companies to maintain an operation that complies with laws and regulations abroad, and for years has published several regulatory documents in regards to this,” said Wei.

Last year, Beijing enacted new regulations governing how its companies should operate outside of China. The new rules call on companies to follow the host country’s standards. They also require Chinese firms to conduct environmental assessments before beginning operations and to consult local stakeholders and people most likely to be impacted by a project.

“It will be an interesting test to see if Chinese companies really follow those guidelines or if it’s empty rhetoric,” said David Castrillon, a research professor on China-related issues at Bogota’s Externado University.

Some see Zijin Mining Group Co Ltd’s purchase of a gold mine in Colombia as a brave investment given the mine’s troubled past. Continental Gold’s operations are situated in the small town of Buritica, in Colombia’s central northwestern Antioquia region. Last year, four Continental Gold workers were killed by gunmen within a few weeks. One of them was shot near Buritica, and the others were murdered at a different exploration site.

Company’s future work in Colombia, but by the time of publication, had received no response.