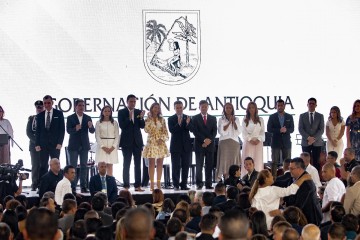 A last minute modification suffered the direction of the Institute of Culture and Heritage of Antioquia. Although on January 1 Natalia Martínez was appointed as director, the Antioquia Governor announced in the last hours the reversal of the decision. This, according to a statement from the Government, is because Martínez does not meet the requirements established by the Institute to hold the position of director. Natalia Martínez, graphic designer and specialist in marketing, communications and advertising, was presented at the time by Aníbal Gaviria as the most suitable person to lead this important entity. Gaviria, says the statement given to the media, regrets this situation “considering that the Department is deprived of the services of a woman who had shown great enthusiasm to lead the Institute of Culture and Heritage of Antioquia.”

While a new property address is designated, Henry Horacio Chaves Parra, social communicator and journalist, will assume the position, who until now served as chief of communications for the Government of Antioquia. This is not the first change that the cabinets of the new leaders of Antioquia and Medellín have undergone due to considerations that they did not take as to the moment of forming them.

Already the mayor of the city, Daniel Quintero, was forced to change the secretary of Education of the city, Alberto Uribe Correa, for legal issues related to his retirement age.