HomeNewsAttention to alerts for possible floods in Antioquia rivers
News

Attention to alerts for possible floods in Antioquia rivers 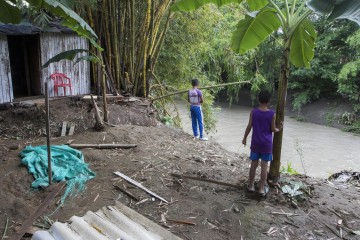 The Regional Center for Forecasts and Alerts (CRPA un Spanish) issued a bulletin of hydrological alerts that must be taken into account by tourists and inhabitants of the riversides in Antioquia, especially in Urabá and West Antioquia.

According to the report, there is an orange alert in the watersheds of the Gulf of Urabá, for “the probability of sudden increases in the León, Carepa and Apartadó rivers, among others that flow into the gulf.”

For this reason, swimmers and residents must take special care in the municipalities of Chigorodó, Apartadó and Carepa. In four other subregions of the department there is a yellow alert, also because of the possibility of sudden increases: 1) in the Mulatos river you have to take precautions in Turbo; 2) in the San Juan river, which flow into the Caribbean Sea; 3) in the Sucio and Murrí rivers, in the middle basin of the Atrato river; 4) and in the currents that cross the municipalities of Concordia, Santa Fe de Antioquia and Liborina, in particular on the Tonusco River and the Juan García and Sinifaná streams Likewise, there is a yellow alert for possible landslides in areas of high slope, in 63 of the 125 municipalities of Antioquia.

The CRPA recommended traveling with special caution on the Medellín-Manizales, Bogotá-Medellín, Quibdó-Medellín and on the Jericó-Jamaica-Jericó roads. The entity advised that “for the next few hours there is a predominance of dry and sunny weather in much of the territory of Antioquia”; however, you should not let your guard down in front of these alerts this weekend, when a high number of visitors take the beaches and rivers of the department

Tags :AntioquianewsRivers
share on Facebookshare on Twitter
Daniel Quintero propose to eliminate the vehicular restriction “Pico y Placa” in Medellin
This is what INPEC found in the cell of Juan Monsalve, witness in case against Uribe