HomeNewsAt least 22 people are dead after a huge highway bridge collapse in Italy, and the death toll will rise ‘significantly’
News

At least 22 people are dead after a huge highway bridge collapse in Italy, and the death toll will rise ‘significantly’

The bridge in Genoa before and after the collapse. Twitter/Google Maps/Business Insider

At least 22 people have been killed and the death toll will rise after a highway bridge collapsed in the northern Italian city of Genoa, the country’s deputy transport minister said in a television interview.

Edoardo Rixi was speaking on SkyNews24 in Genoa when he said that the collapse was “not acceptable.” He said eight people were injured.

The governor of the Liguria region, which contains Genoa, said that the current death toll of 22 will rise “significantly,” according to news agency Reuters.

One person has been pulled out alive from the rubble under the bridge and is being transported to a hospital by helicopter, Italian news agency ANSA reports. At least 20 vehicles were involved in the collapse, according to Rixi, and the disaster had affected people in the buildings below — although he did not elaborate.

The collapsed Morandi bridge was a section of the A10 motorway, near the city center. The collapse took place as torrential rain fell in the region at 11.30 a.m. local time on Tuesday.

The section of the bridge that collapsed was around 80 meters (262 feet) long and 50 meters (164 feet) above the ground, according to news agency Reuters, and crossed over railway tracks and some buildings.

The head of the ambulance service said there were “dozens of dead”, according to Italian news agency Adnkronos. 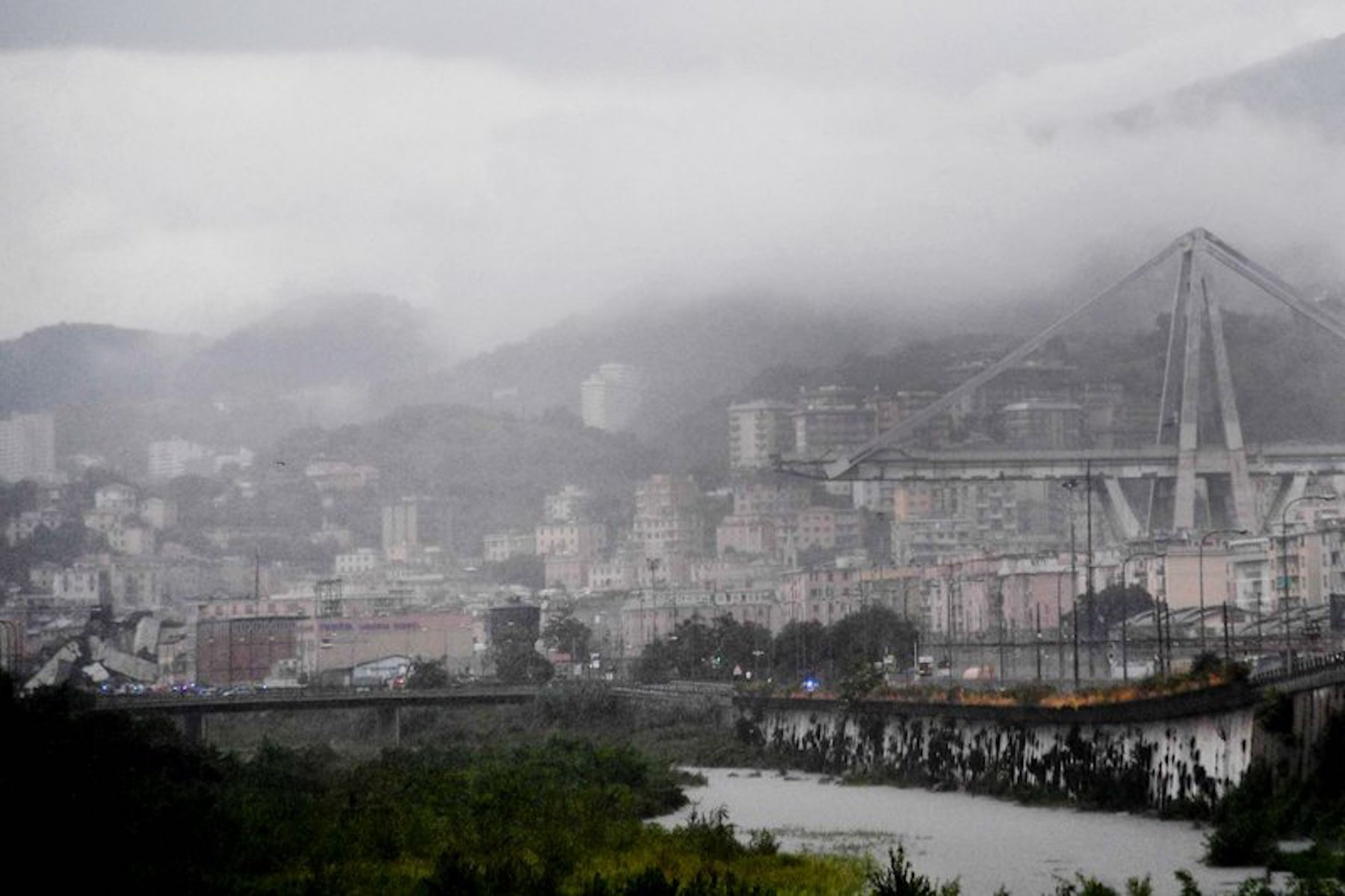 Photos of the aftermath show a large portion of the Morandi bridge missing. (Luca Zennaro/ANSA via AP

Photographs from the scene show rubble on the ground underneath the bridge and a number of buildings underneath it.

Image and videos posted to Twitter after the collapse show a large portion of the bridge missing.

Genova, Italy. Another chilling image from my native region: a lorry stops meters from the gap left by a stretch of the suspension bridge which collapsed on the A10 motorway in Genoa this morning. #morandi pic.twitter.com/w2GpIMl5iU

The area below the bridge is heavily built up, footage shows.

These dramatic before-and-after images show the scale of the incident:

BREAKING. OMG, a motorway bridge has just collapsed over houses, buildings a railway in Genoa, #Italy, several victims feared.
(in the pics the bridge before and after the incident) pic.twitter.com/W0OK3Zy8h9

Police posted photo and video footage of the aftermath:

Matteo Salvini, Italy’s deputy prime minister, said on Facebook that he and other officials were closely monitoring the disaster response.

The bridge was built in the 1960s, and restructuring work was carried out on the bridge in 2016, Reuters reports.

share on Facebookshare on Twitter
Reports of a serious incident in Göteborg, Sweden, as at least 14 cars are set on fire near a shopping mall
Architect of bin Laden raid issues stunning rebuke of Trump