As Protests Rage On, Monuments To Confederates & Christopher Columbus Tumble Down 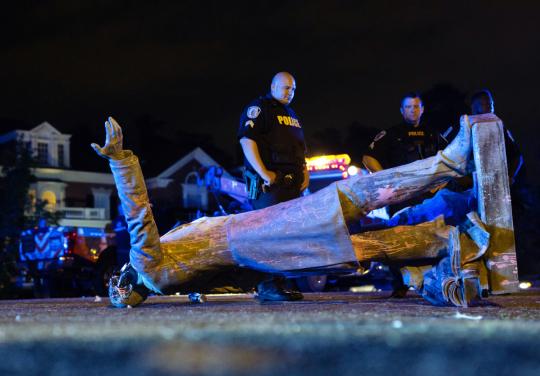 Protesters and cities across the country have torn down or debased racist symbols of America’s past that commemorate the Confederacy, a colonizer, and other controversial figures.

As protests around the country continue against police brutality and the death of George Floyd, demonstrators have vandalized and removed several Confederate statues and other controversial monuments.

Protesters in recent weeks have torn down or debased several racist symbols of America’s past that commemorate a colonizer, Confederate soldiers, and other controversial figures.

On Wednesday night, a group of protesters beheaded four Confederate statues in Portsmouth, VA, The Virginian Pilot reported. They then reportedly used a tow rope to tear one of the statues down, which fell on one protester’s head and injured him.

Also on Wednesday, protesters in Richmond, VA pulled down a statue of Jefferson Davis, who was the president of the Confederate States of America during the Civil War.

Protesters in Richmond have pulled down a statue of Jefferson Davis, the former president of the Confederacy pic.twitter.com/Myl0UfDSNI

Statues of Christopher Colombus across the country also became a target this week.

Protesters tore down a Christopher Columbus statue at Byrd Park in Richmond, VA Tuesday following a peaceful demonstration. They then reportedly spray painted it, set it on fire, and threw it into Fountain Lake, where it was later removed. Richmond Mayor Levar Stoney said Wednesday that he is working with Richmond’s History and Culture Commission to establish “a process by which Richmonders can advocate for change to the figures we place on public pedestals across our city in a legal and peaceful way.”

A time lapse of the Christopher Columbus statue being pulled out of Fountain Lake. @nbc12 pic.twitter.com/o6O2dBhnrR

The Carolina Panthers removed a statue of team founder Jerry Richardson from the Bank of America Stadium on Wednesday, following concern that there would be “attempts to take it down,” Richardson sold the football team to David Tepper in 2018 amid allegations of racism and sexual misconduct.

The targeting of controversial monuments hasn’t just taken place in the U.S. In Bristol, protesters toppled down a statue of 17th-century slave trader Edward Colston on Sunday. On Monday, UK protesters vandalized a memorial of controversial former prime minister Winston Churchill in Parliament Square by spray painting “was racist”  under his name.

The mayor of Houston, TX announced on Thursday, following calls from activists, that the city will relocate its two Confederate statues from public parks by June 19.

At the national level, politicians have renewed a conversation about removing statues of Confederate soldiers — including Jefferson Davis — from the Capitol, or renaming military bases and equipment with Confederate names.

President Trump has railed against the idea of renaming the bases or removing the monuments this week, while a Senate committee led by Republicans voted Wednesday to require the Pentagon to remove Confederate names from military bases within three years. In an apparent defiance of President Trump, Republican lawmakers supported the proposal written by Sen. Elizabeth Warren, the New York Times reported, though several of them expressed concerns about its details.

Seriously failed presidential candidate, Senator Elizabeth “Pocahontas” Warren, just introduced an Amendment on the renaming of many of our legendary Military Bases from which we trained to WIN two World Wars. Hopefully our great Republican Senators won’t fall for this!

share on Facebookshare on Twitter
BREAKING: Speaker Pelosi Calls For Removal of Confederate Statues From the US Capitol
Colombia moves against Alex Saab, puts him on INTERPOL list