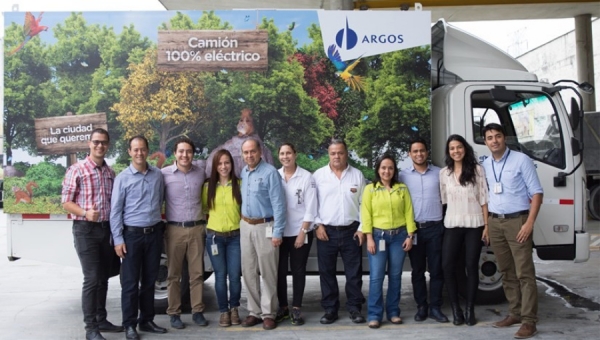 The new trucks employ 600-volt batteries for supplying power to electric drivetrains, with capacity to haul four tons of cement per trip.

“We are determined to contribute to a better air quality” around Medellin, said Cementos Argos supply-chain manager Juan Guillermo Vanegas.

“The renewal of the vehicle fleet with clean technologies is now a necessity, and the entry of electric- or natural-gas-fueled vehicles are fundamental in this purpose, as well as the implementation of collaborative schemes with other actors in the supply chain such as cargo consolidators and night deliveries that also reduce emissions significantly.

“We invite the rest of the transport companies and cargo generators to take steps in the search for similar or better solutions, likewise inviting the departmental and national governments to be promoters of laws that facilitate these changes,” added Vanegas.

Argos also boasted that at year-end 2018, it became the first company in Colombia to launch certain trucks with engines operating on 100% natural gas (instead of diesel fuel), paired with electric-powered concrete mixers. Such trucks can cut particulate matter and noise emissions compared to conventional diesel trucks, the company noted.

On a related front, following a COP$250 million (US$80,000) investment in railway upgrades, Argos launched a new railroad-transport service for part of its cement production, on the route from Sogamoso to Bogotá, carrying an average of 2,400 tons per month.

“The cargo transported by the train is equivalent to that of seven trucks with a capacity of 34 tons in a single trip. Thanks to this activity, an approximate reduction of 66 tons of carbon dioxide was achieved in 2018, corresponding to 984 [truck] trips,” according to the company.

share on Facebookshare on Twitter
Medellin’s ‘emvarias’ sanitation-unit ebitda improves, but profits slip
Duque “Has Done Nothing for Us,” Says Trump