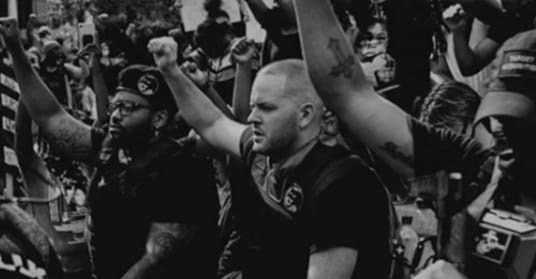 Last week, a group of armed men and one woman, wearing body armor and carrying what looked like AR-15s, appeared at Black Lives Matter protests in Georgia. Some of the group, who were all clad in black, wore berets with the supposed imagery of the Black Panther movement, while a single white guy among them wearing the same uniform, stood out.

“I just want everyone (that’s here) to know that we are the New Black Panthers,” said the lone woman in the group through a megaphone at one of the protests in Decatur.

“We’re here as a visual representation of equality,” she continued, “you have a right to bear arms. You do not need a license to carry a rifle. You need a license for a handgun. When we represent our rights people see and they understand.”

Days after that the group mysteriously reappeared carrying weapons at an Atlanta BLM march, except now it claimed to be a new group: Black Panther Revolutionaries Atlanta Chapter. In Facebook posts on Tuesday, the actual leader of the New Black Panthers Party, Hashim Nzinga, denounced the fake Black Panthers as a “most likely FBI led group” and clarified that his organization, under no circumstances, has white members. (The New Black Panthers Party has been condemned by original Black Panthers, and the Southern Poverty Law Center has listed them as a hate group.)