HomeLiveA computer was asked to predict which start-ups would be successful. The results were astonishing
Live

A computer was asked to predict which start-ups would be successful. The results were astonishing

In 2009, Ira Sager of Businessweek magazine set a challenge for Quid AI’s CEO Bob Goodson: programme a computer to pick 50 unheard of companies that are set to rock the world.

The domain of picking “start-up winners” was – and largely still is – dominated by a belief held by the venture capital (VC) industry that machines do not play a role in the identification of winners. Ironically, the VC world, having fuelled the creation of computing, is one of the last areas of business to introduce computing to decision-making.

Nearly eight years later, the magazine revisited the list to see how “Goodson plus the machine” had performed. The results surprised even Goodson: Evernote, Spotify, Etsy, Zynga, Palantir, Cloudera, OPOWER – the list goes on. The list featured not only names widely known to the public and leaders of industries, but also high performers such as Ibibo, which had eight employees in 2009 when selected and now has $2 billion annual sales as the top hotel booking site in India. Twenty percent of the companies chosen had reached billion-dollar valuations.

To contextualize these results, Bloomberg Businessweek turned to one of the leading “fund of funds” in the US, which has been investing in VC funds since the 1980s and has one of the richest data sets available on actual company performance and for benchmarking VC portfolio performance.

The fund of funds was not named for compliance reasons, but its research showed that, had the 50 companies been a VC portfolio, it would have been the second-best-performing fund of all time. Only one fund has ever chosen better, which did most of its investments in the late 1990s and rode the dotcom bubble successfully. Of course, in this hypothetical portfolio, one could choose any company, whereas VCs often need to compete to invest.

Recently, Bloomberg asked Goodson to repeat the feat. Here, we’ll take an in-depth look at the methodology behind the new list, and also broader trends set to flourish in the market.

First, Goodson selected 50,000 private companies that had received venture capital or venture debt in the past three years. The data on investment received, investors, location and founding year came from S&P Capital IQ and Crunchbase and was current up to September 2016.

Goodson then generated a network map to show where entrepreneurs had made investments, focusing on tech companies founded during the past 18 months 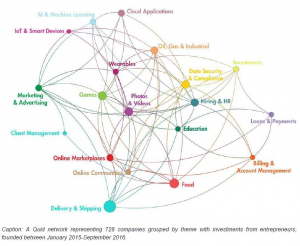 Simultaneously, Goodson generated a map of venture capital bets by looking at all investments by five of the top-performing VC firms in the world in the past two years. 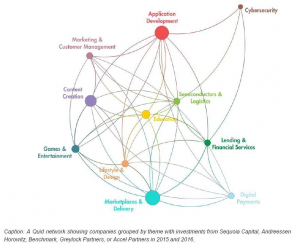 Together these networks allowed Goodson to distil the most promising areas for investment:

Goodson then whittled down the list, giving preference to companies with these characteristics: at least two rounds of funding; fewer days between rounds; fewer days since the last round; and founders who had worked together previously now bringing in a third outside partner.

Since Bloomberg was looking for companies the public had not yet heard of, Goodson further refined the list so it included no company founded before 2011 (in fact, 12 were founded in 2015 or 2016). The majority had raised relatively small amounts of VC funding, with 31 companies raising less than $10 million. Bloomberg also asked that Goodson exclude biotech.

The final outcome of any complex problem still relies on a blend of human intuition and artificial intelligence and this list was no different. Based on all the outputs from Quid, the final decision fell to Goodson.

The list provided some interesting details. For example, investors in EyeVerify include Sprint and Wells Fargo, who participated in a $6 million round, suggesting that eye authentication is now of real interest to both telcos and banks. Indeed, shortly after being picked by Goodson, EyeVerify was acquired for reportedly $100M in cash by Alibaba’s payments arm, Ant Financial, to increase user trust and safety in financial transactions.

BlueLine Grid – with $6 million raised – is backed by Motorola and In-Q-Tel, which suggests that their secure mobile solution is being adopted by US government agencies as In-Q-Tel only invests with a sponsoring agency partner.

share on Facebookshare on Twitter
The Battle for Venezuela, Through a Lens, Helmet and Gas Mask
Trump Removes Anthony Scaramucci From Communications Director Role