40,000 Missing Deaths: Tracking the True Toll of the Coronavirus Outbreak 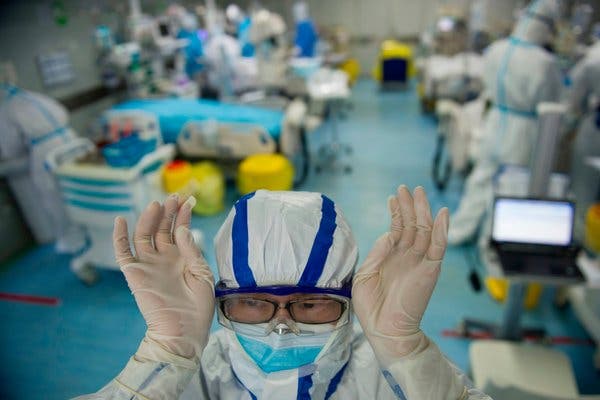 At least 40,000 more people have died during the coronavirus pandemic over the last month than the official Covid-19 death counts report, a review of mortality data in 12 countries shows — providing a clearer, if still incomplete, picture of the toll of the crisis.

In the last month, far more people died in these countries than in previous years, The New York Times found. The totals include deaths from Covid-19 as well as those from other causes, likely including people who could not be treated as hospitals became overwhelmed.

These numbers undermine the notion that many people who have died from the virus may soon have died anyway. In Paris, more than twice the usual number of people have died each day, far more than the peak of a bad flu season. In New York City, the number has spiked to six times the normal amount. 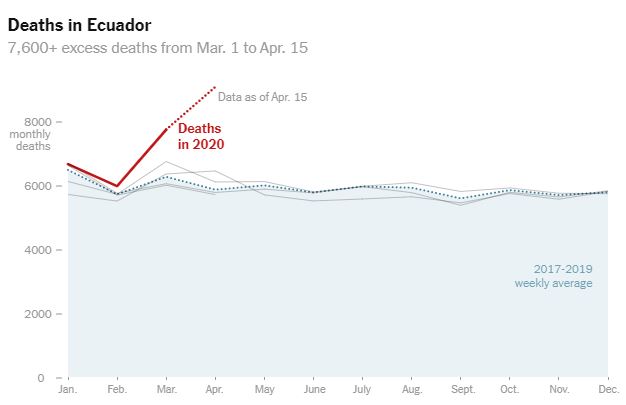 The city has become the epicenter of the outbreak in the United States. More than 27,000 people have died since the beginning of March — 20,900 more than normal, and 4,200 more than have been captured by official death statistics.

Of course, mortality data in the middle of a pandemic is not perfect. The disparities between the official death counts and the total rise in deaths most likely reflect limited testing for the virus, rather than intentional undercounting. Officially, about 200,000 people have died worldwide of the coronavirus as of Monday.

But the total death numbers offer a more complete portrait of the pandemic, researchers say, especially because most countries report only those Covid-19 deaths that occur in hospitals.

“Whatever number is reported on a given day is going to be a gross underestimate,” said Tim Riffe, a demographer at the Max Planck Institute for Demographic Research in Germany. “In a lot of places the pandemic has been going on for long enough that there has been sufficient time for late death registrations to come in, giving us a more accurate picture of what the mortality really was.”

Ecuador recorded about 7,600 more deaths than usual over the same period in the last three years — 15 times higher than the reported number of Covid-19 deaths in the country during the same period.

The differences are particularly stark in countries that have been slow to acknowledge the scope of the problem. In March, the Indonesian government attributed 84 deaths to the coronavirus in Jakarta. But over 1,600 people more than normal were buried in Jakarta cemeteries that month, according to data from the city’s Department of Parks and Cemeteries. (The data was first reported by Reuters.)

And in Istanbul, the city recorded about 2,100 more deaths than expected from March 9 through April 12 — roughly double the number of coronavirus deaths the government reported for the entire country in that period.

The increase in deaths in mid-March suggests that many people who died had been infected in February, weeks before Turkey officially acknowledged its first case.

We estimated the excess mortality for each country by comparing the number of people who died from all causes this year with the historical average during the same period. The Economist is also tracking these deaths, known as excess deaths, in this way.

In many European countries, recent data show 20 to 30 percent more people have been dying than normal. That translates to tens of thousands of more deaths.

In some countries, like Belgium and France, authorities are working to include Covid-19 deaths outside of hospitals in their daily reports, or by adjusting the overall Covid-19 death totals once a death is confirmed in places like nursing or retirement homes.

Others, like Britain’s Office for National Statistics, have started to release mortality data after death certificates have been processed, confirming those that mention Covid-19. This provides a more accurate account of mortality than the hospital figures released each day by Public Health England, however the data is delayed about two weeks.

Deviations from normal patterns of deaths have been confirmed in many European countries, according to data released by the European Mortality Monitoring Project, a research group that collects weekly mortality data from 24 European countries.

It is unusual for mortality data to be released so quickly, demographers say, but many countries are working to provide more comprehensive and timely information because of the urgency of the coronavirus outbreak. The data is limited and, if anything, excess deaths are underestimated because not all deaths have been reported.

“At this stage, it’s a partial snapshot,” said Patrick Gerland, a demographer at the United Nations. “It’s one view of the problem that reflects that most acute side of the situation, primarily through the hospital-based system.”

That is likely to change.

“In the next couple of months,” Mr. Gerland said, “a much clearer picture will be possible.”

Age breakdowns in mortality data could provide an even clearer picture of the role of Covid-19 in excess deaths. In Sweden, for example, a high mortality rate among men age 80 and older accounted for the largest increase in deaths, suggesting that the overall numbers understate the severity of the outbreak for older people in particular.

Even taking into account the new numbers, experts say the death toll to date could have been much worse.

“Today’s rise in all-cause mortality takes place under conditions of extraordinary measures, such as social distancing, lockdowns, closed borders and increased medical care, at least some which have positive impacts,” said Vladimir Shkolnikov, a demographer at the Max Planck Institute for Demographic Research. “It is likely that without these measures, the current death toll would be even higher.”