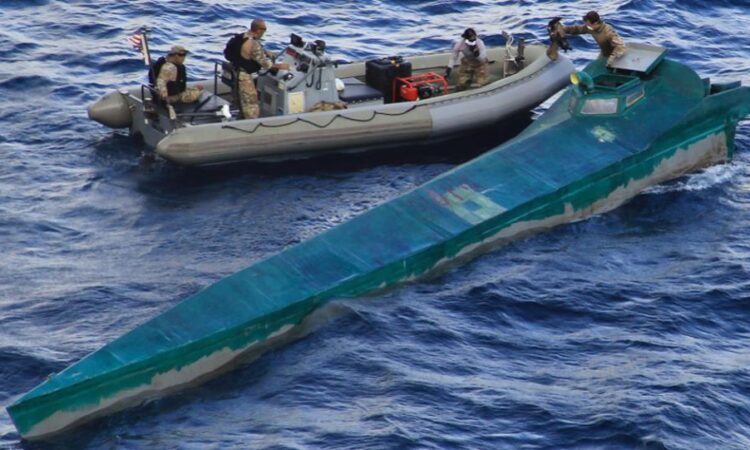 The success of the new Enhanced Counter-Narcotics Operations by U.S. Southern Command (SOUTHCOM) are slowly coming out. Since April 1 the Command has dedicated more naval assets to stemming the flow of illicit drugs into the United States. During four short days in mid-May the U.S. Navy and Coast Guard stopped three narco submarines in their tracks.

News of the interdictions is only now coming out in a series of press releases. There is often a lag reporting these incidents, especially when they are intercepts at sea. Part of the reason for this may be that it gives law enforcement a brief window where the cartel may not know that the sub has been seized. This allows intelligence leads to be followed up without alerting the drug traffickers. In some cases this can result in another drugs bust where the next narco-sub in the chain is also caught.

Like most so-called ‘narco submarines’ the three caught are actually Low Profile Vessels (LPVs). This means that they cannot fully submerge. But they do run extremely low in the water which makes them harder to detect.

They are increasingly standardized, with series production of the same design. The three are not closely related to each other, but all three can be tied back to previous interdictions of virtually identical vessels. Like models of car, each design has a common master boat builder behind them. But the factories are hidden in the jungles of Colombia.

These days narco-subs typically carry about 1.5 tons of cocaine split into 1 kg (2.2 lb) bricks and then bundled together into bales. This is more than most ‘go fast’ speed boats but less than they used to 10 years ago when 6 tons was a typical estimate. Much of their hull is actually taken up with fuel to give them an incredible range of more than 2,000 miles

The first seizure was on May 13. Coast Guard cutter James (WMSL-754) interdicted a narco sub in Eastern Pacific. It was a high speed low-profile vessel (LPV) with three outboard motors. Under the deck it had 3,100 lb of cocaine.

The next day the guided missile destroyer USS Pinckney (DDG 91) intercepted another low profile vessel with around 3,000 lb of drugs. The Coast Guard team aboard made the seizure. This was actually the first of the three incidents to be reported. This one was very narrow, a type of boat called a Very Slender Vessel (VSV).

The USS Pinckney made a second interdiction two days later on May 16. This one was another VSV but of a distinctly different design from the earlier one. Again the payload was around 3,000 lb.

There may be more incidents which have yet to be reported. But these incidents show that the Enhanced Counter-Narcotics Operations is already having an impact.

share on Facebookshare on Twitter
Facebook Executives Shut Down Efforts to Make the Site Less Divisive
Anonymous Sends A Message To The Minneapolis Police Department After Hacking Their Website! “We Will Be Exposing Your Many Crimes To The World”