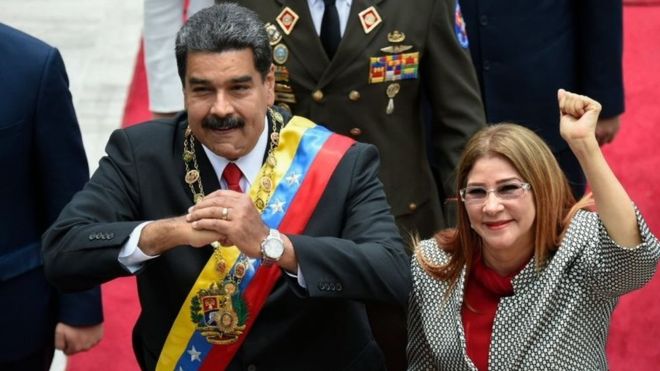 The move comes just over a year after President Nicolás Maduro had his assets frozen by the US government.

US firms and individuals are banned from doing business with those on the sanctions list.

“We are continuing to designate loyalists who enable Maduro to solidify his hold on the military and the government while the Venezuelan people suffer,” Mr Mnuchin said in statement.

It also seized a private Gulfstream jet worth $20m (£15.2m) belonging to Rafael Sarria, who according to the treasury department is a “front man” for Diosdado Cabello, the president of the National Constituent Assembly and an influential figure in the government.

Diosdado Cabello is already subject to US sanctions. The were imposed in July 2017, at the same time those targeting President Maduro.

“Treasury will continue to impose a financial toll on those responsible for Venezuela’s tragic decline, and the networks and front-men they use to mask their illicit wealth,” the statement reads.

The statement also said that the sanctions could be lifted if those named “take concrete and meaningful actions to restore democratic order, refuse to take part in human rights abuses, speak out against abuses committed by the government, and combat corruption in Venezuela”.

It is not the first time the US has accused the Venezuelan government of corruption. Two weeks ago, a US treasury official said Venezuela’s government was stealing from a state-run food programme while its own people go hungry.

Pressure on Venezuela has also been growing within Latin America. Food shortages and a widespread economic and political crisis have driven 2.3 million Venezuelans out of their homeland since 2014, many of them to Colombia, Ecuador, Peru and Chile.

Countries in the region say they are struggling to cope with the influx of Venezuelans and a group 14 Latin American and Caribbean countries as well as Canada, known as the the Lima Group, are due to meet on Tuesday in New York to discuss how to deal with the mass migration.

Peru’s foreign minister announced last week that his country along with Argentina, Chile, Colombia and Paraguay would ask the International Criminal Court to start a preliminary investigation into alleged crimes against humanity in Venezuela.

share on Facebookshare on Twitter
Venezuela crisis: Chinese hospital ship docks for a week
International swindler recognition continues to do its thing in Canada