The faulty front-runners for Colombia’s presidency 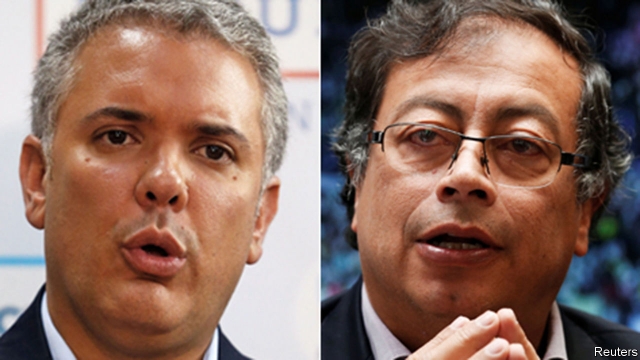 THE last time Colombia elected a president, in 2014, the country was at war. Its army was fighting the FARC, a Marxist guerrilla group dedicated to overthrowing the state and to making money from drug-trafficking and other crimes. In 50 years 220,000 people died and 7m were displaced. This year’s presidential election, the first round of which is scheduled for May 27th, is the first since the war’s end. President Juan Manuel Santos negotiated a peace deal with the FARC in 2016 and won the Nobel peace prize for it but cannot run again.

Candidates in this year’s vote are rejecting his legacy. The front-runner is Iván Duque (pictured left), an ally of a conservative former president, Álvaro Uribe, who was the peace accord’s most ferocious critic (see article). His closest competitor is Gustavo Petro (on the right), a former mayor of Bogotá who was himself a member of the M19 guerrilla group in the 1980s. He is pro-peace, but he rages from the left against the establishment to which Mr Santos belongs.

Either of the front-runners would be a bad choice. Mr Duque is a moderniser but his mentor, Mr Uribe, is not. As president, Mr Uribe led the offensive against the FARC that paved the way for peace. But he also has an authoritarian streak, and is allied with large landowners who will resist reforms mandated by the peace deal, such as updating land records and property tax. Colombians are right to wonder whether Mr Uribe would have too much influence over a Duque presidency.

Mr Duque shares Mr Uribe’s disdain for the peace deal and will weaken it if he becomes president. That would not rekindle all-out war. But it might prevent a peace agreement with the ELN, a guerrilla group that is still in the field.

Mr Petro would be a worse president. His plans include the self-defeating notion of pulling Colombia out of the oil business, its chief source of exports. His term as mayor of Bogotá was marked by clashes with the city council and disputes with contractors, one of which left rubbish uncollected. His opponents compare him to Hugo Chávez, who launched next-door Venezuela on its course towards economic and political disaster. That is an exaggeration. But neither Mr Petro’s temperament nor his ideas equip him for the presidency.

Colombians’ hunger for change is understandable. Income inequality, though falling, is the second-highest in Latin America. Schools and health care are not good enough. Corruption is a running sore. People are angry that the peace accord has not ended the violence in the countryside and allows FARC leaders who have committed crimes to sit in congress.

Other candidates have better answers to most of these complaints than Mr Duque or Mr Petro. Humberto de la Calle, the government’s chief peace negotiator, is a worthy aspirant. Sergio Fajardo, a mathematician who has put clean politics and education at the centre of his campaign, looks as if he has a better chance. A former mayor of Medellín and governor of the department of Antioquia, he has shown that, unlike Mr Petro, he can run a government successfully. Unlike Mr Duque, he would seek to improve the implementation of the peace agreement, not undermine it. He gets our vote.

Even if the wrong man wins, do not despair for Colombia. Unlike Venezuela, whose president, Nicolás Maduro, has just won a fraudulent election, Colombia is a solid democracy with relatively strong institutions. At least the next president, whoever he may be, is unlikely to change that.