The crop-spraying drones that go where tractors can’t 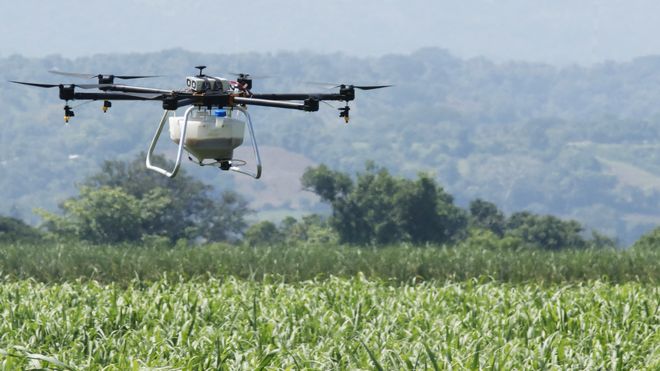 Something unusual is happening on farms in the small Central American nation of El Salvador. Many fields, mainly of sugar cane, are now being tended by drones.

This isn’t a case of new tech replacing old farm equipment – some of these fields are being sprayed for the very first time.

“We’re spraying crops that previously have not being sprayed,” says Nick Nawratil, chief operating officer of Hylio, the firm behind the trial.

“That’s one huge opportunity that drones are opening up.”

In a country where access to fields is often difficult for tractors and even planes, drones are showing great potential. Mr Nawratil thinks yields could improve by “tens of percent”. 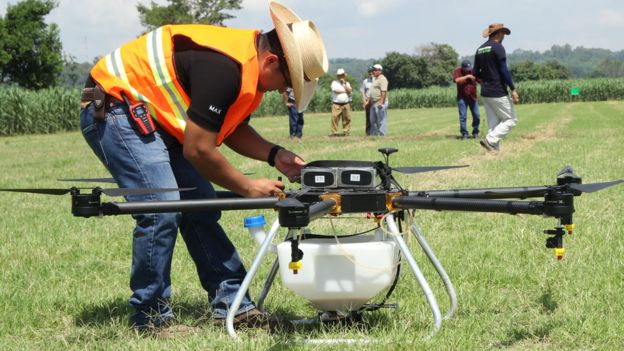 At the moment, most of the work with farmers in El Salvador is trial-based, but Hylio is covering a lot of ground. Mr Nawratil says that in one morning a single spray team can service 40 hectares – roughly the same area as 40 international rugby pitches.

He’s seen for himself how much more quickly sugar cane, which can grow to be 20ft (6m) tall or more, shoots up after receiving fertiliser.

Drones are touted as useful flying farmhands because they can, in theory, improve the precision with which fertilisers, pesticides or fungicides are applied. This is due to their ability to spray specific volumes on GPS-defined routes through a field.

One South African farmer recently claimed that using drones reduced the pesticide use on her farm by 30%. 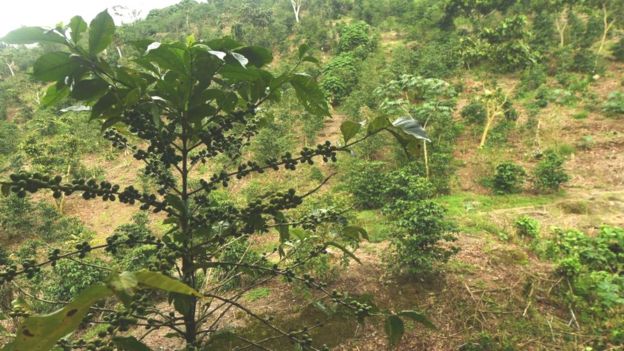 This improved efficiency could go some way to allaying fears about the environmental damage that overuse of pesticides and fertilisers can cause, such as reduced biodiversity and the poisoning of aquatic life when chemicals run off into rivers after rain.

For developing countries in highly competitive global agriculture markets, drones are clearly tempting. The Philippines recently announced that 5,000 hectares of vegetable farms would be used to test crop-spraying drones, for instance.

And in India, a similar pilot project on cotton farms was revealed by state authorities in May.

A few years ago, Stelios Kotakis and colleagues at market research firm IHS Markit projected that there would be around 400,000 shipments of drones to firms in the agriculture and forestry sectors in 2017. 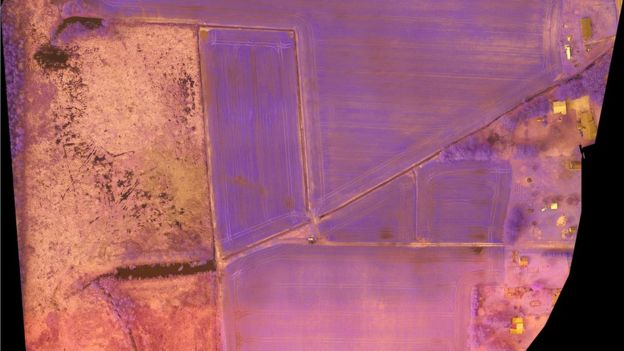 “From a [follow-up] survey we did across the industry, we were pretty close to that number,” he says.

There are many tech companies that claim their drone-based farming systems can increase farmers’ yields – among them US-based PrecisionHawk and Airinov in France.

In Airinov’s case, multispectral cameras are used to analyse nitrogen absorption at particular stages of a crop’s development, charted on what’s known as the Zadoks growth scale.

This helps farmers work out the best time to add fertiliser and where it is needed most, reducing wastage of this expensive resource.

A large French farming co-operative called Ocealia has seen an average 10% increase in crop yields, according to the firm. 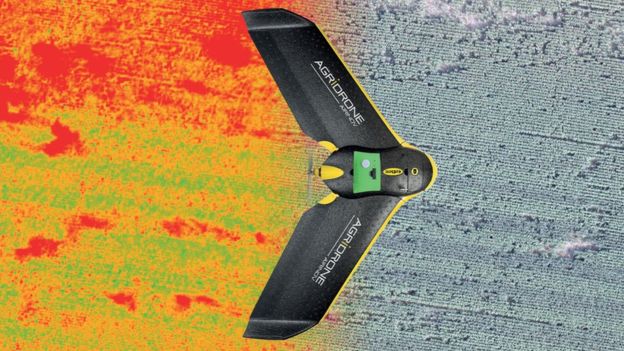 Multispectral sensors can record non-visible wavelengths, such as infrared radiation and ultraviolet light, as well as visible light, enabling them to identify nutrient deficiencies, pest damage, and water deficiency.

Drones may be automated but they still require humans to pilot, programme and service them, which raises the cost. But in developing countries where labour is cheaper, drones seem more commercially appealing.

“In countries where manpower is cheaper, it tends to be more widely used than in countries like the US and UK,” says Philippe Simard at Simactive, a firm that provides software to process imagery from drones and satellites. 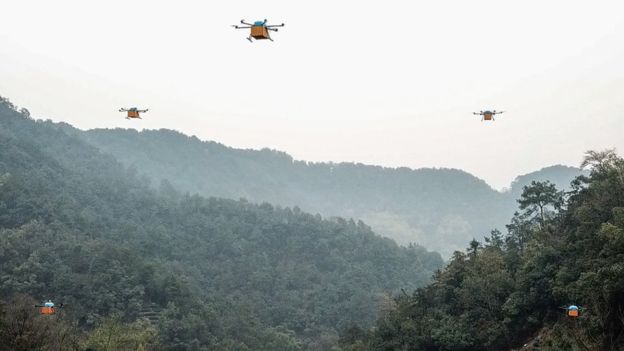 “We don’t have Americans down there running these drones, we train locals, locals are the ones providing the services,” he says.

Mr Simard’s company offers farmers the ability to turn drone-captured imagery into 3D maps of their fields to show how water may flow across them – useful when determining how flooding or run-off might affect crops and soil.

Other things show up in the imagery as well, though. A recent project in Brazil used the system to detect centipede damage on plants, locating where in the field this was a problem.

But despite these promising case studies, drones in agriculture still have a lot to prove, says Bruce Erickson, agronomy education distance and outreach director at Purdue University in Indiana.

share on Facebookshare on Twitter
Five big things that have made Apple
Over 440,000 undocumented Venezuelans in Colombia to get work and residency papers