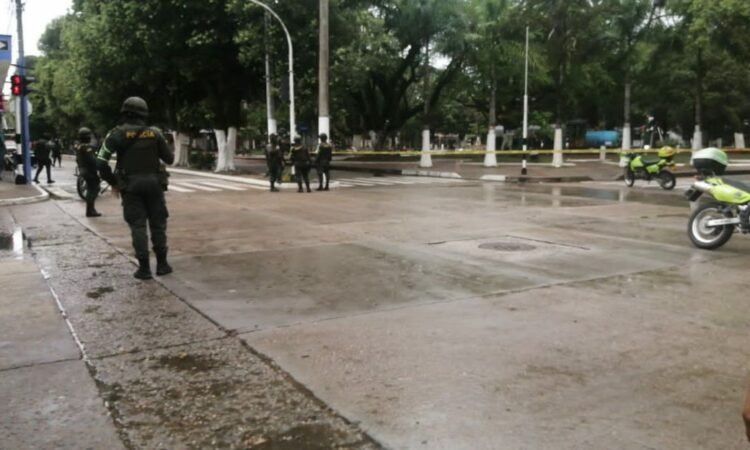 On January 19, a car bomb exploded a few meters from a building in the city of Saravena, in the Colombian municipality of Arauca, where some 60 community leaders had gathered.

The activists survived the bombing because hours before the attack, they had erected makeshift barricades with plastic barrels they filled with stones as FARC dissidents, with Antonio Medina at the helm, were intent on assassinating them.

The attack claimed one life, Simeón Delgado, who was a security guard at the Colombian Agricultural Institute headquarters where the van exploded causing extensive damage to several buildings, including the Héctor Alirio Martínez building which is used by community-led organizations and was the target of the attack.

“These were moments of considerable concern because there were around 60 social leaders and human rights defenders here. We honestly did not think they would be capable of attacking a space that harbors not only social organizations but also institutions and the community,” Sonia López, president of the Joel Sierra Human Rights Foundation, tells Efe.

Arauca, a municipality that borders Venezuela, is in the midst of an escalating conflict.

According to data from the National Ministry of Defense, between January 1 and February 21, 99 homicides were reported in Arauca, 45 of which occurred in Saravena.

The ministry says there are some 1,781 victims of forced migration as a result of a conflict between the National Liberation Army (ELN) guerrilla group and gangs formed by FARC dissidents who refuse to disarm.

Since the Colombian government and the FARC penned a peace deal in November 2016, 21 human rights defenders have been murdered in Arauca, according to the Somos Defensores project.

Many community leaders told Efe they have been accused of being ELN militiamen by FARC dissidents. According to the activists, FARC dissidents have morphed into paramilitary fighters because they no longer have a political struggle and attack the civilian population.

Although the car bombing occurred over a month ago, the four-story building used by activists has no windows and the only thing that has been repaired is the façade of the first floor which has been covered in bricks, a stark contrast to the concrete of the rest of the building.

Inside, it is chaos.

“We hadn’t experienced this type of situation here for a long time,” says López, who was there when the attack shook the vicinity.

Although violence is commonplace, Saravena leaders are focused on boosting the region’s economy.

One of the star projects was the creation of an aqueduct that provides water to over 16,000 families in the municipality.

The Saravena Community Aqueduct and Sewer Company was also the target of a January 9 attack that claimed no victims nor injured persons.

“On January 9, a threat came via WhatsApp audios from ‘Antonio Medina’, who is commander of the Front 28 dissident group (of FARC) in which he threatened the presidents of boards, social leaders and projects. He threatened to kill them. That January 9, they threw a grenade at the Ecaaas community project,” López laments.

López is one of dozens of Arauca social leaders who live under the threat of armed groups and don’t receive any state protection.

“We have a commitment to stay on this land, we are not going to leave. We have witnessed different actions with which they have tried to get rid of us but we have a clear slogan which is: the defense of life and the defense of our land”. EFE

laprensalatina.com
share on Facebookshare on Twitter
13 best places to visit in Colombia to soak up salsa and sunshine
Colombia rises to sixth largest avocado exporter