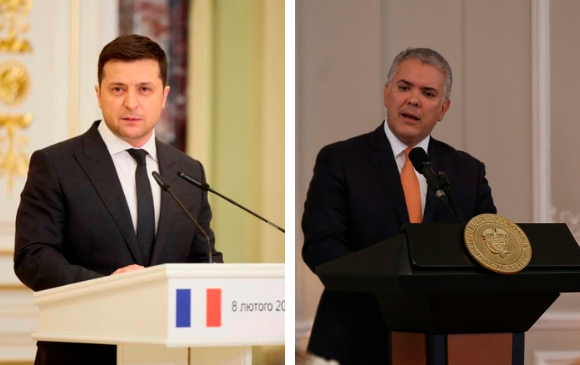 President Duque confirmed he had spoken with Zelensky, to whom he expressed Colombia’s support after Russia’s attack that has left more than four million refugees in little over one month.

”It was a touching call. President Zelensky has shown the world his courage and Ukraine has been the victim of a vile and disproportionate attack, of a systematic violation of International Humanitarian Law (IHL) and of atrocious acts with the bombing of maternity hospitals and the destruction of its infrastructure,“ said Duque.

He added that Zelensky ”has shown the world his courage … is an example in the defense of the sovereignty of his people“. Duque also conveyed to Zelensky Colombia’s solidarity with the Ukrainian people, ”who are defending themselves today in every possible way and who deserve the solidarity of the whole world.“

”The world has to continue condemning these facts and we express that Colombia is also there with humanitarian support providing the support that is required to provide this difficult situation, including this massive migration of citizens who leave to look somewhere for a function and a helping hand,“ Duque clarified.

The South American leader also stressed that ”Colombia has been firm with its voice condemning this opprobrium, it has done so in all multilateral instances and all diplomatic channels as the only NATO partner in Latin America and the Caribbean.“

”I am happy to contact @IvanDuque. I thank Colombia for its humanitarian assistance and consolidation of South American countries in support of Ukraine. We agreed to initiate joint economic and defensive projects after the war,” Zelensky posted on Twitter in English.

According to the latest report from the United Nations High Commissioner for Refugees (UNHCR), Ukraine is at emergency level three, the highest level as per the current standards.

share on Facebookshare on Twitter
Not just ‘cocaine and war’: Colombian pride at Oscar-winning Encanto’s positive portrayal
Suspect in 1994 killing in Colombia found in Boston suburb