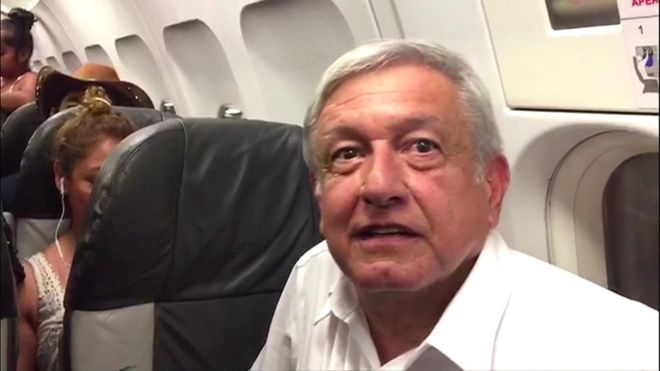 Mexico’s President-elect Andrés Manuel López Obrador has insisted that he still plans to sell the presidential jet despite spending three hours grounded on a commercial plane.

Mr López Obrador’s flight from the southern state of Oaxaca to Mexico City was delayed because of heavy rain.

“I won’t get on the presidential plane,” he said from his aircraft seat.

The left-wing leader, who won the presidential election by a landslide in July, will be sworn in in December.

It was said at the time to be the most modern and efficient plane used by any world leader, according to Mashable.

What do Mexicans think?

Mr López Obrador, who has pledged to run an austere government, was one of hundreds of passengers unable to fly from the beach resort of Huatulco on the Pacific coast to the capital.

Footage from on board the flight and acquired by Reuters news agency shows the president-elect explaining that he would be “embarrassed” to board “a luxurious plane in a country where there is so much poverty”.

“I’m not going to change my mind because of this,” he said, adding: “Enough with this tomfoolery, it’s over, it’s over, any politician who acts arrogantly won’t last.”

News of the incident was met with criticism among some residents of Mexico City.

“I think that if the plane has already been purchased then he should just use it,” said Alejandro Aguilar, adding that it was “not normal” for presidents to be grounded.

Another, Arturo Miranda, said that while the president-elect appeared to be showing empathy with the people, “We would have to ask ourselves how would he travel when he has to attend an international event?”

share on Facebookshare on Twitter
How to steal land the size of a small country and get away with it
Jair Bolsonaro: Why Brazilian women are saying #NotHim