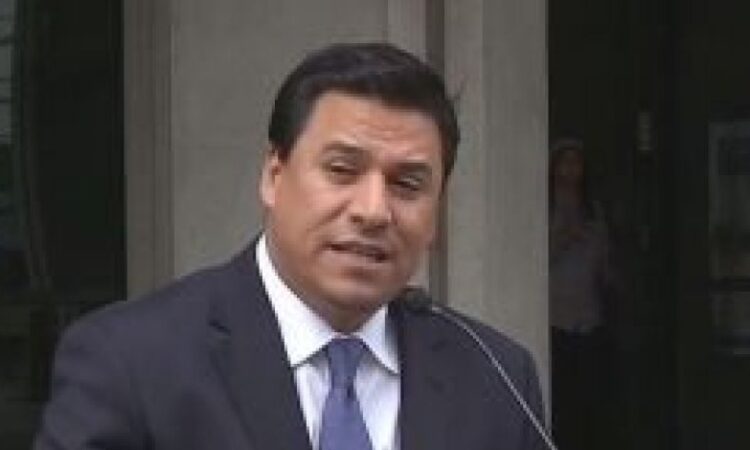 LOS ANGELES – A federal grand jury returned a 34-count indictment against Jose Huizar, an elected member of the Los Angeles City Council, on charges that he led a criminal enterprise where he used his powerful position at City Hall to enrich himself and his close associates, and unlawfully gave favorable treatment to developers who financed and facilitated bribes and other illicit financial benefits.

The indictment incorporates the allegations made in last month’s criminal complaint that charged Huizar, 51, of Boyle Heights, with one count of conspiracy to violate the Racketeer Influenced and Corrupt Organizations (RICO) Act. The indictment specifically alleges 402 overt acts that Huizar and his co-conspirators committed to further their criminal enterprise, including bribery, honest services fraud, and money laundering.

Huizar is expected to appear via videoconference for his arraignment, which is scheduled for August 3 in United States District Court.

Huizar has represented Council District 14 (CD-14), which includes downtown Los Angeles and its surrounding communities, since 2005. Huizar for several years was chair of the city’s influential Planning and Land Use Management Committee, a position he lost after the FBI executed search warrants at his city offices and personal residence in November 2018. During the search of his home, agents seized approximately $129,000 cash that was stashed in Huizar’s closet and which, according to the indictment, he received from a Chinese billionaire and another businessperson seeking favors from him.

The indictment alleges that Huizar operated the “CD-14 Enterprise,” along with co-conspirator members, including “Individual 1,” a former general manager of the Los Angeles Department of Building and Safety and former deputy mayor; George Esparza, Huizar’s former special assistant; and real estate development consultant George Chiang. Members and associates of the criminal enterprise referred to Huizar as their “boss,” operated as a criminal organization, and worked together for common purposes, the indictment alleges.

The CD-14 Enterprise allegedly had several objectives, including enriching its members and associates through means that included bribery, extortion, and honest services fraud; advancing its political goals and maintaining its control and authority; concealing the enterprise’s financial activities; and protecting the enterprise by concealing its activities and shielding the enterprise from detection by law enforcement, the city, and the public.

Among the multitude of corruption allegations, the indictment alleges that Huizar illegally accepted more than $800,000 in benefits from Chairman E, a Chinese billionaire who runs a multinational development firm and who owns a hotel in Huizar’s district. Chairman E provided $600,000 in collateral to fund a settlement of a sexual harassment lawsuit filed against Huizar by a former CD-14 staffer, allegations that threatened his 2015 re-election campaign, according to the indictment.

The indictment outlines Huizar’s concealment of illicit benefits, including by instructing his special assistant on how to avoid bank reporting requirements, using his family members to launder hundreds of thousands of dollars in bribes, making false statements on a bank loan application and failing to report his illicit benefits on tax returns and ethics disclosure forms. Huizar allegedly engaged in obstructionist conduct, including attempting to influence other witnesses and lying to federal prosecutors and the FBI.

An indictment contains allegations that a defendant has committed a crime. Every defendant is presumed innocent until and unless proven guilty beyond a reasonable doubt.

Huizar is the fifth person to be charged in the ongoing corruption investigation being conducted by the FBI and the U.S. Attorney’s Office. The other four defendants have pleaded guilty. Esparza, Chiang, and Justin Jangwoo Kim, a Huizar fundraiser who admitted to facilitating bribes, are scheduled to be sentenced by United States District Judge John F. Walter in February 2021. Esparza, Chiang, and Kim are cooperating with the ongoing investigation.

Former Los Angeles City Councilman Mitchell Englander pleaded guilty on July 7 to charges of scheming to falsify material facts related to trips he took to Las Vegas and Palm Springs that were funded by a businessperson. Englander’s sentencing hearing is scheduled for December 7, also before Judge Walter.