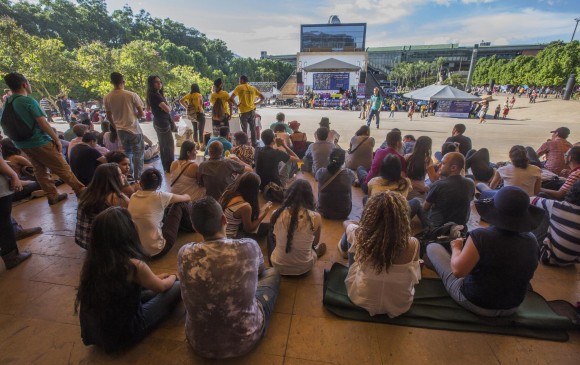 In the 29th edition, the International Poetry Festival of Medellín wants to open the doors of dialogue and reconciliation starting from a literary week with 79 poets from 35 countries, the organizers informed. The event will be published in a place between June 29 and July 6 in different places of the city.

It will have 120 recitals, panels, colloquiums, workshops, courses and conferences related, in part, to the theme of this year. “The peace and sovereignty of the peoples acquire a lot of significance, just in this year in which a historical level is remembered in the bicentennial of Colombia’s independence,” the festival said in a statement. Anja Utler (Germany), Ahmed Al Mulla (Saudi Arabia), Diana Bellessi (Argentina), José Muchnik (Argentina), Sona Van (Armenia-United States) and Quito Nicholaas (Aruba-Netherlands). Likewise, the Colombians Felipe García Quinero, Gloria Posada, Henry Alexander Gómez, William Jiménez, Andrés Galeano, Saúl Gómez, Yorlady Ruiz, Margarita Losada and Luisa Fernanda Trujillo, among others.

During this edition will be topics such as “Bicentennial of Walt Whitman”, “Poetry, thought and memory about war and peace”, “The body as poetic territory” and “Poetry and human rights.” About the meeting The Festival is an annual event held since 1991 in Medellín and was declared as cultural heritage of Colombia by Law 1291 March 6, 2009. It is organized by the Magazine Prometheus and the World Poetry Movement, and has the support of the Mayor’s Office of Medellín, the Right to Livelihoods Foundation Award and the Ministry of Culture through the National Program of Cultural Agreement, between other entities.

share on Facebookshare on Twitter
People ‘waiting in line’ to adopt ‘miracle’ baby found in a plastic bag, says Georgia official
25 years ago we were snatched from the gentleman Andrés Escobar