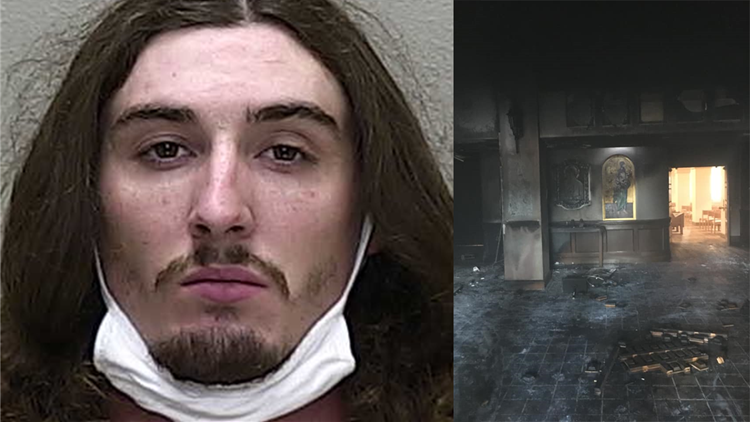 A Florida man was charged with federal hate crime in Ocala.

Steven Shields, 24, of Dunnellon was charged with setting fire to and damaging the Queen of Peace Catholic Church in Ocala by a federal grand jury in Orlando, who returned an indictment against him.

According to the indictment, Shields rammed his minivan through the doors of the Queen of Peace Catholic Church on July 11, 2020 and intentionally poured several gallons of gasoline inside the building before igniting the blaze.

Everyone who was inside the Church at the time were able to escape without injury.

The indictment says that he was motivated to set the fire “due to the religious character of the church.”

Shields is charged with one count of intentional damage to religious property, a hate crime charge that falls under the Church Arson Prevention Act, and one count of using fire to commit a felony.

“Our freedom of worship granted in the Constitution is a freedom that we all hold dearly. My deputies and I are sworn to protect that right and will always ensure our citizens can worship in peace,” Marion County Sheriff Billy Woods said shortly after the crime. “I’m really proud of my deputies for capturing this man so quickly and we appreciate the assistance from all of the state and federal agencies that worked alongside of us during this investigation.”

If convicted, Shields faces a maximum term of 20 years imprisonment for intentionally damaging religious property. Shields faces an additional mandatory minimum of 10 years for using fire to commit a felony. He also faces up to three years of supervised release, a $250,000 fine and restitution.